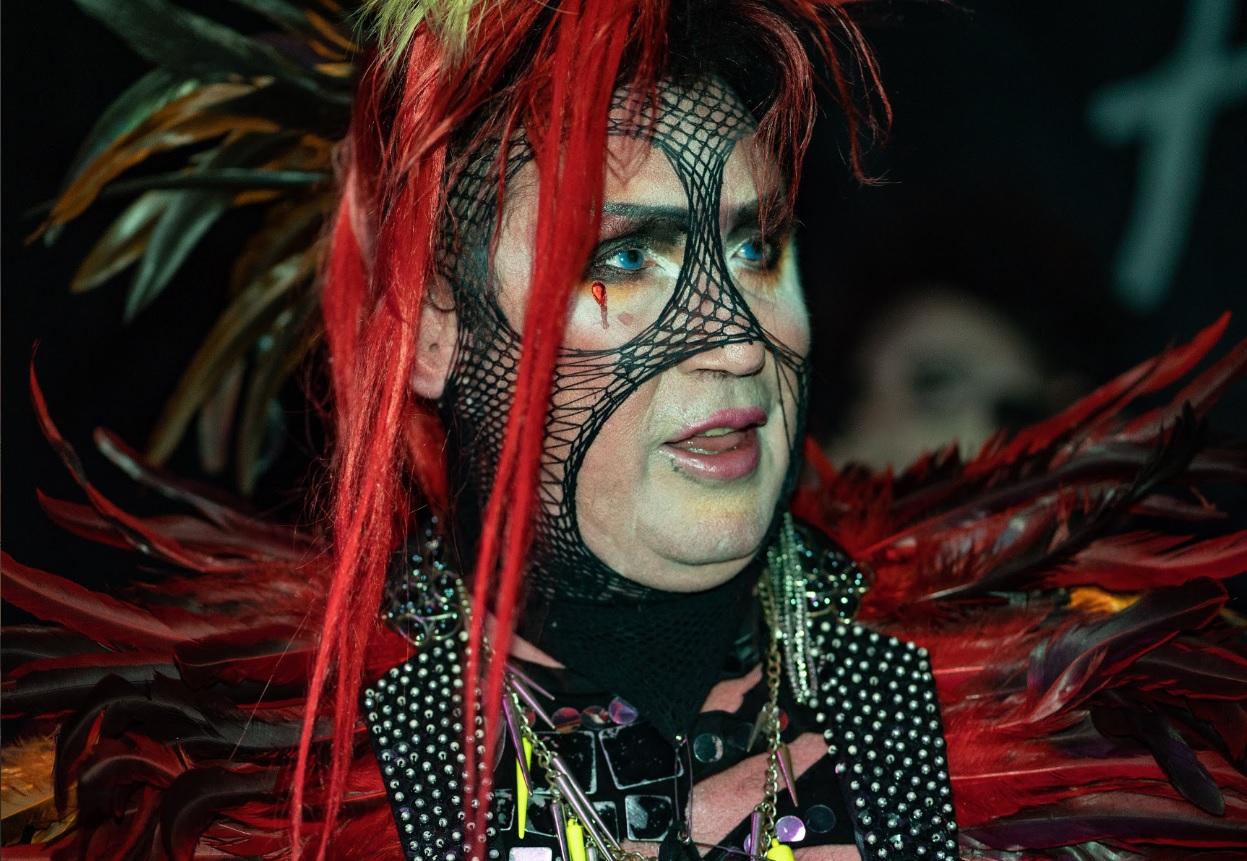 Martin Degville and his Sigue Sigue Sputnik Electronic rocked into town on Saturday night and everyone had a ball. In fact the great man himself posted: “We All Had FIRKIN GREAT ROCK N ROLL SHAZZA BOOM BOOM BANGARAMA last NITE at the ALBERT – BRIGHTON – THANKS EVERYONE – YOU WERE ALL STARZ XXXXXXXXXXX”.

Sputnik were performing at the ever popular Prince Albert located near to Brighton Railway Station, where they performed a terrific 16-track set to an eager sold out crowd. Being a ‘Halloween Extravaganza’ meant that some punters even dressed up for the occasion. Sadly I was not one, as I had to run from the seafront where I had just enjoyed seeing Heaven 17, who had performed a set as support to Squeeze. I left my colleague Martin in the Brighton Centre to cover the Squeeze performance, whilst I hot-footed it up to ‘The Albert’ – read our review HERE.

Thankfully the band times were different between the two venues and I was able to catch virtually all of the support bands set, who were DIGITALIS – more on them later. Our photographer was already at The Albert, by the time I arrived and so we had it covered. 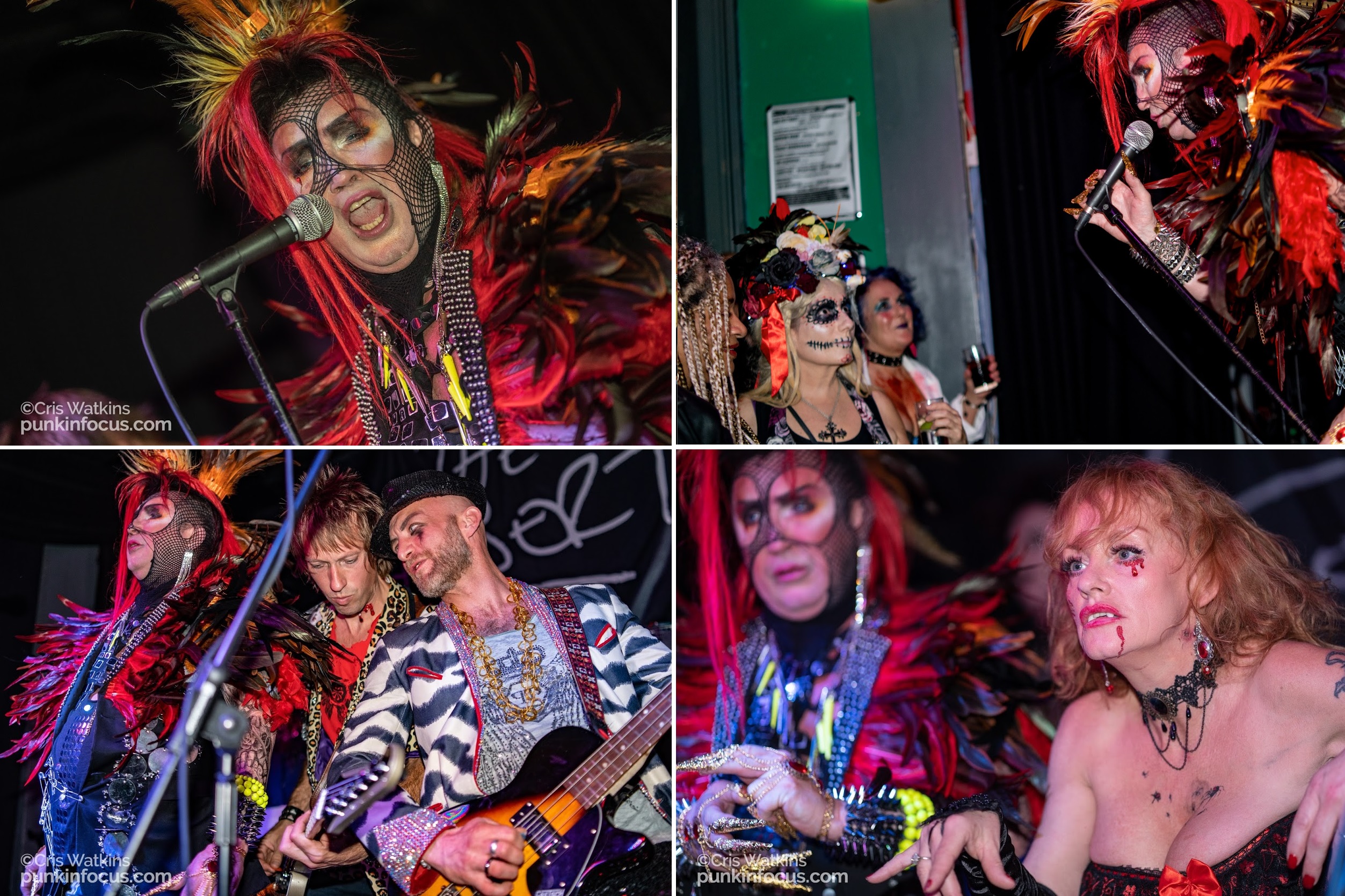 I can recall exactly when I very first got into the original Sigue Sigue Sputnik. It was Friday 16th August 1985. I had tape recorded the second episode of a new TV show produced by Janet Street-Porter called ‘Bliss’, because I knew that German band Propaganda were on it and I loved them. I played the tape back and I was greeted by Degville dressed as a glam-punk peacock and several other members looking like something from a sci-fi film set. I was instantly shocked and my brain shouted after a millisecond “WTF I HATE THIS!”. However by end the of the song I had been whipped up into such heightened excitement that I had to see this lot play live at any cost! Talk about an immediate turnaround! Watch and enjoy the full expanded ‘Bliss’ performance HERE.

The following morning I went out and bought the music papers as there was no ‘tin-ter-web’ back in those days and I spied that they were playing in Essex in less than a month’s time on Wednesday 11th September, at a club in Rayleigh called The Pink Toothbrush, which had previously been called Croc’s. I purchased several tickets for myself and a few mates. We went and were absolutely blown away! So much so that we even burst into their dressing room immediately after their set and met them all in various states of undress!

Sigue Sigue Sputnik were the most exciting band of the 1980’s and I had thankfully seen them perform live several times before they had even released their debut ‘Love Missile F1-11’ single, that went crashing into the official UK Singles Chart at No.3 on 1st March 1986. Their groundbreaking debut album ‘Flaunt It’, hit the UK Top 10 in August of the same year.

The Sputnik gigs would turn up at some random locations and we ventured to the best of them including locally at the Shelley Arms in Nutley (Janet Street-Porter was there as dating Tony James at the time I do believe), Martletts Hall, Burgess Hill (on 18th December 1988), The Gloucester in Brighton and The Escape Club, which is now Patterns in Brighton and even a boy scouts hut in a park situated halfway between Royal Tunbridge Wells and Tonbridge! We also saw them live at Abbey Road Studios on 13th December 1985, Birmingham Powerhouse on 9th March 1986, Croydon Underground and the Royal Albert Hall on 13th October 1986. There were so many, if I only I still had my ticket stubs for them.

Sputnik was the most hyped band bar far at the time and many people jumped on board for the 15 minutes of fame, but I for one never jumped ship. Those repetitive ‘key-tar’ notes accompanied by two drummers has certainly done it for me. The music to me seemed so ahead of their time, as they said at the time something like that they invented the sound of the future. Which funnily enough harked back to the best elements of Donna Summer’s ‘I Feel Love’ meets cyber punk rock’n’roll. Even today it sounds fab.

Over the years, the original lineup of co-mentor Tony James, with guitarist Neal X, and drummers Chris Kavanagh and Ray Mayhew as well as sampler Yana YaYa have all left the fold, hence the word ‘Electronic’ being bolted onto the original band name these days. But Degville, who was always very much the frontman and face of the band, is still on the case. He was last seen in these parts a few years ago at The Con Club in Lewes as just a duo with hubby Johann Weidemann, but The Prince Albert gig is very much an expanded affair. In fact it’s only the lineups third gig together and I have to say that being a live quintet of Martin Degville (vocals), Jasper Vincent (guitar), Frank Honnor (bass), Darren (Korg) and Johann Weidemann (Yamaha), certainly worked for me! They even had the assistance of compare Samantha (aka Page 3 Girl, or as misheard by people around me ‘Pastry Girl’).

My mate had seen the streamline Sputnik at Hastings Pride a few months ago and informed me that our Albert gig was much better, with the sound being more contained within the building. The Albert gig was a great set. I’m not interested to know exactly how much is backing track and how much is ‘live’, as if it sounds and looks brilliant, them I’m as happy as Larry. 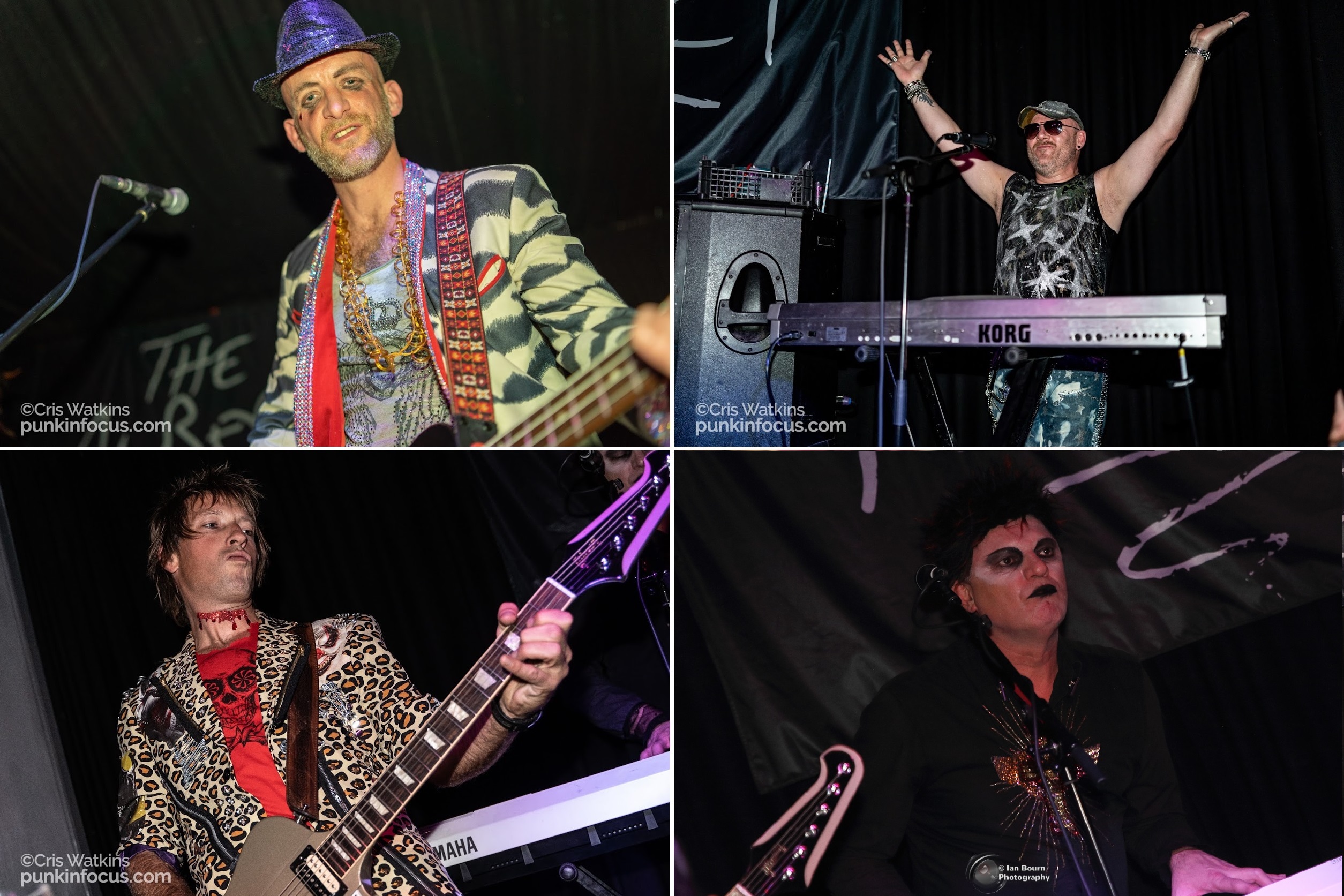 I ensured I was positioned dead centre right at the front and holding onto the speaker, should I get moshed! The gig started with my fave Sputnik track ‘Rockit Miss U.S.A’ – happy days! Many of the old classics followed with aplomb, including ‘Teenage Thunder’, ‘Hey Jayne Mansfield Superstar!’, ‘21st Century Boy’, ‘Atari Baby’ and ‘Love Missile F1-11’. Although I noted that the setlist was changed prior to the start of the gig and we lost ‘Everybody Loves U’ and ‘Sex-Bomb-Boogie’, but we did gain an impromptu ‘Ziggy Stardust’ when Johann had to briefly sneak off for a comfort break. In fact we had a trio of Bowie numbers tonight, with the others being ‘The Jean Genie’ and ‘Heroes’. I’ve also seen them perform ‘Rebel Rebel’ in the past too. I can’t imagine how uber-excited Degville must have been when Bowie covered their ‘Love Missile F1-11’ for the European limited edition of his 2003 ‘Reality’ album. I’ve got my copy, have you?

Tonight ‘Boom Boom Satellite’ sounded rather decent with it’s ‘Pretty Vacant’ riff intro, but track of the night for me was one that I can’t actually recall having heard before…Shock! Horror! It’s either called ‘Planet Bi’ or ‘Planit Boy’ depending which setlist you look at. It was exactly like a long lost track from the early days which would have fitted very well on debut album ‘Flaunt It’. Yes, it sounds like all of those old Sputnik classics that are all the same just like early Ramones tracks, but I just can’t get enough of them! I’m not actually aware of it being released either, so I pray that it comes out very soon, although, I have found that it’s been kicking around for a decade, apparently. Enjoy it HERE.

As Degville now resides near the sea in St Leonards-on-Sea, let’s hope that he will play live again in Brighton very soon! HINT! HINT! 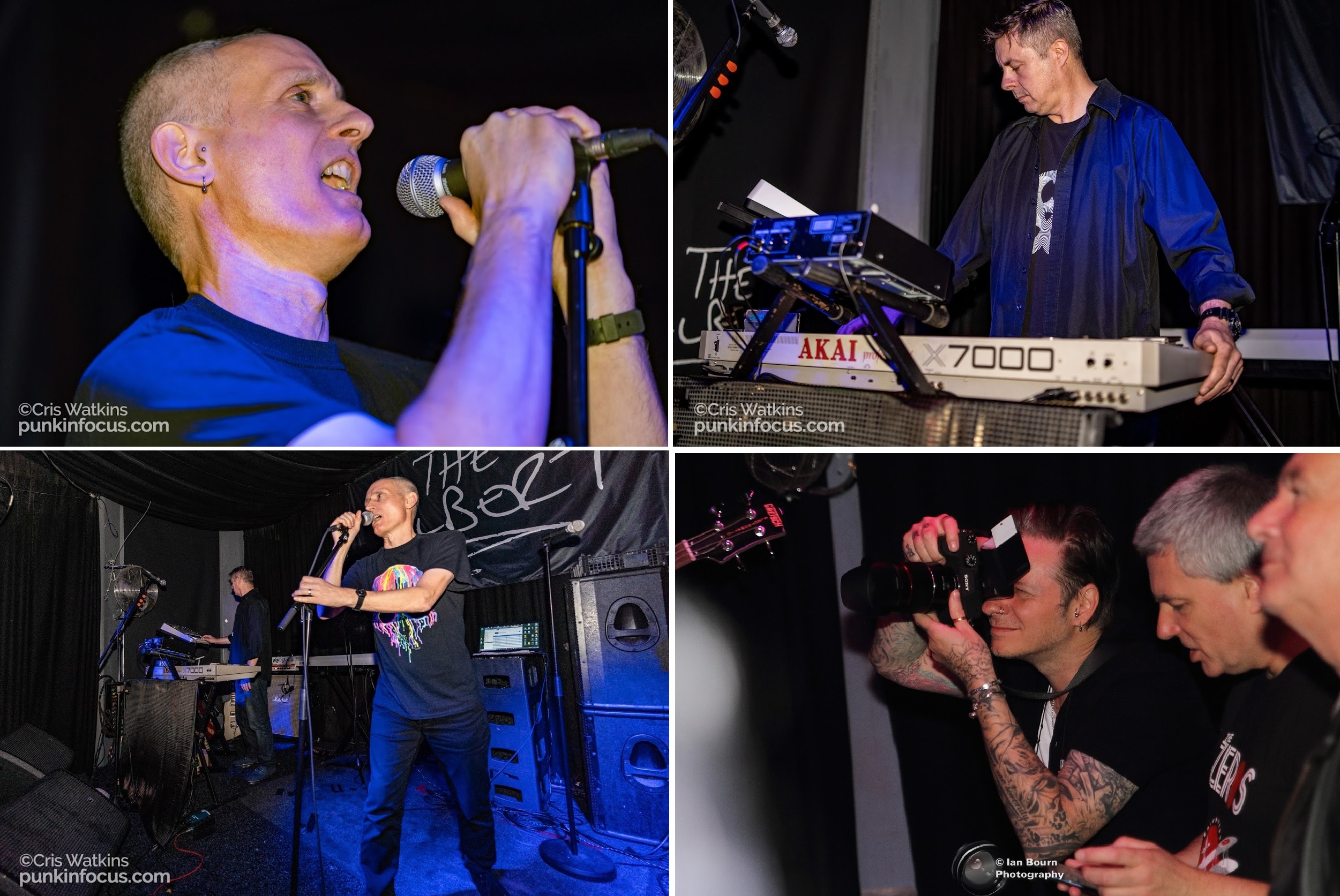 As mentioned earlier, support came from DIGITALIS who are Lewes based vocalist Graham Denman and Weymouth based keyboardist Mike L’Angellier. They formed in Slough in 1986 and have cited over 30 years of electronic influences.

The DIGITALIS sound is very much an amalgam of synthpop, Hi- NRG, industrial rave, techno and EDM. I was more than pleased when after a decade away, that the guys dropped ‘Hold On To Me’ 5-track EP last year, which was a much needed follow up to their highly acclaimed double album ‘Collections Of Conditions’. Clearly they are on a renaissance at the moment as new material is very much the order of the day at our gig with no less than five unreleased compositions, with two of them being premiered for us lucky punters, those being ‘It’s Not The End Of The World’ (Feat. Severn Suzuki) and ‘For All The Times’.

DIGITALIS are always a great band to dance too and I mustered as much energy as I could, having previously legged it from the Brighton Centre, and bopped along to their most enjoyable uplifting set. Nice one guys! 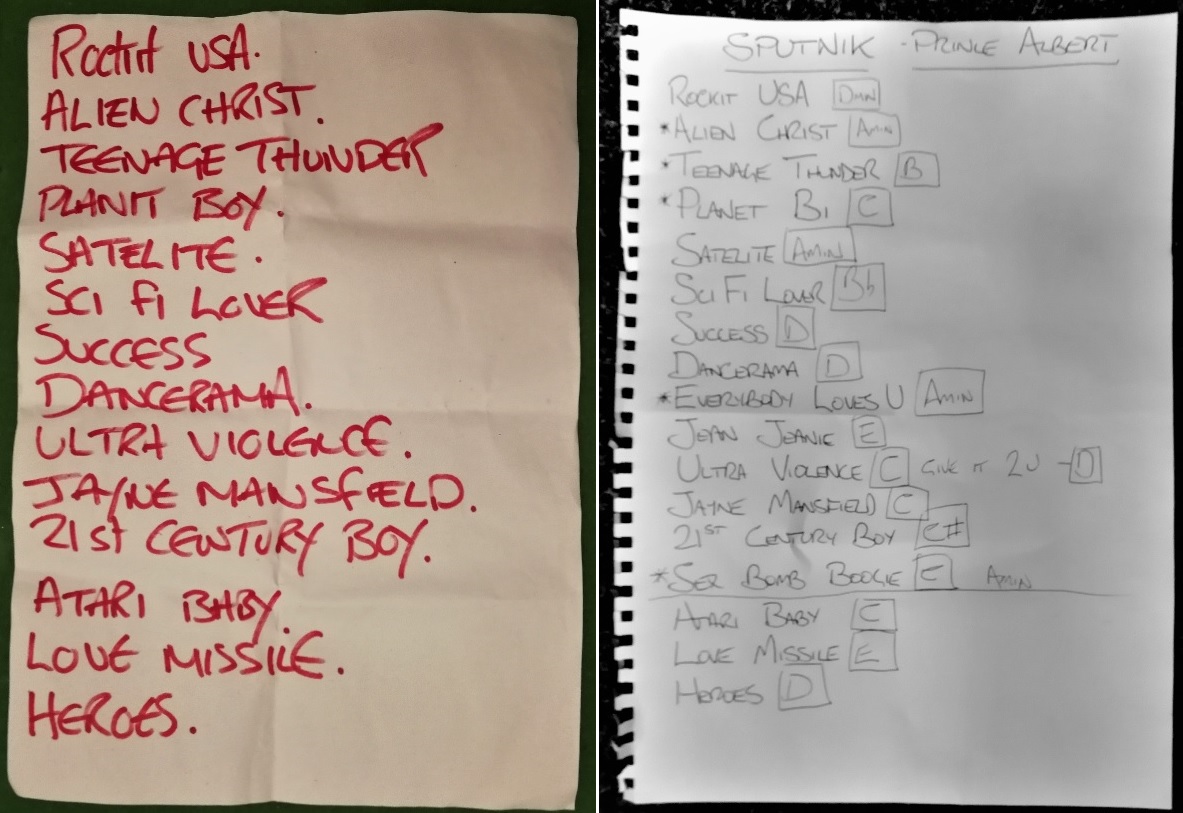 Sputnik setlists with updated one on the left 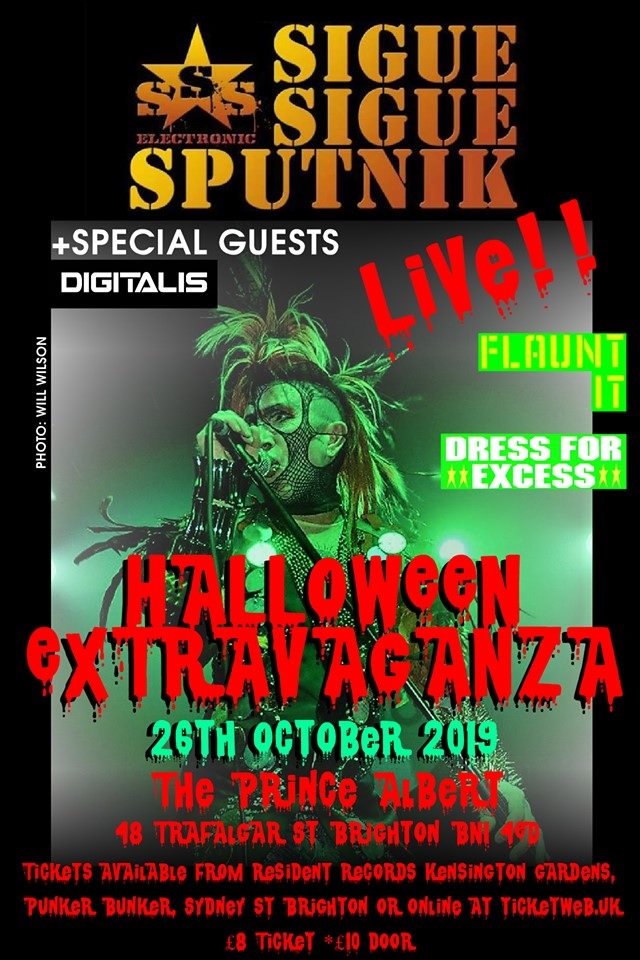