Planners to decide whether Brighton hotel revamp can go ahead

Brighton’s oldest seafront hotel will have a multimillion-pound major refurbishment if planners give the go-ahead next week. 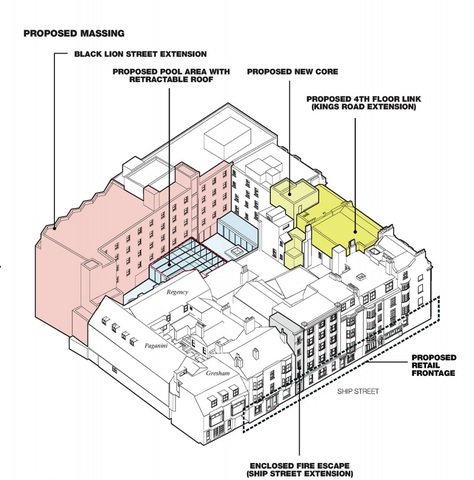 The Old Ship will have an extra 54 bedrooms, six shops lining the front of the building and a swimming pool with a retractable roof.

The plans also include a six-storey extension at the back, better bars and restaurants, a health club and a basement night club.

The Cairn Group, which owns the hotel, said that the overhaul was vital for the 17th century hotel’s future – and would be good for Brighton’s economy.

Officials have recommended backing the plans when they go before Brighton and Hove City Council’s Planning Committee at Hove Town Hall next Wednesday (6 November).

And the scheme has won the support of the Regency Society which said: “Other than the Assembly Rooms, the interest of the Old Ship is at least as much historical as architectural.

“The reordering seems unlikely to be detrimental to the much-altered interior while producing substantial benefits in the improvement of the public room.”

If the plans are approved, Cairn will be asked to pay a “developer’s contribution” of more than £40,000 towards the council’s “Local Employment Scheme” and for public art.

The Old Ship Hotel is a locally listed heritage building in the Old Town Conservation Area, while the Assembly Rooms are grade II* listed.

The hotel consists of a number of different buildings, dating from 1867 until the 1960s.

In 1650, it became known as the Old Ship Inn and, in 1703, it gained sea views when buildings at the bottom of Ship Street were swept away.

The council’s Planning Committee is due to consider the scheme at Hove Town Hall next Wednesday (6 November). The meeting is scheduled to start at 2pm and should be open to the public.