Alireza Jahanbakhsh finally pushed the monkey off his back as the Seagulls’ one-time record signing fired the Albion ahead after three minutes.

The Iranian international sent Brighton on their way to a vital Premier League win at home to Bournemouth.

Jahanbakhsh looked almost overcome with emotion as he celebrated in front of the East Stand.

Joshua King forced Maty Ryan to palm an effort away as both teams pushed forward.

Jahanbakhsh then almost turned provider as he crossed for Neal Maupay whose shot sailed over.

Albion were having a lot of attacking play, similar to the way that they performed against Spurs.

Janhanbakhsh tried his luck again from a Leandro Trossard pass but this time his shot was charged down.

The unusual pairing of Aaron Mooy and Yves Bissouma in the Albion midfield was having an impact, with Davy Propper playing a deeper role.

Bournemouth gained the ascendancy as the half wore on and Joshua King and Harry Wilson both had great chances to equalise.

But they were thwarted by Ryan and a combination of Lewis Dunk and great blocks from Shane Duffy and Dan Burn.

Albion were aware of the need for a second goal to see off the game.

Trossard and Bissouma were combining well but it was Aaron Mooy who was the engine pushing Albion forward.

Mooy had a shot from distance, which had another Aaron, this time Bournemouth keeper, Ramsdale scrambling across his goal line but the shot was wide.

Bissouma then casually waltzed through the Cherries defence only to see his low shot come back off the post.

Albion were now seemingly desperate for second, then came a Trossard free kick which caused chaos in the area.

It eventually fell to Burn via Lewis Dunk and the 6ft 7in defender somehow swivelled around and planted the ball in the bottom corner.

Alas, VAR spotted that almost 50 seconds before scoring Burn had been in an offside position and his goal, his first for the Albion, was chalked off.

Then came a significant contribution from Bournemouth’s Jack Stacey.

First it appeared that he had handled the ball from an Albion attack in the area but VAR put him in the clear.

Then the midfielder was injured but – with Lewis Cook, Ryan Fraser and Callum Wilson already on as substitutes – Eddie Howe couldn’t replace Stacey, who reverted to full back.

Soon after there was a sweet combination of Burn and most effectively Trossard. The Belgian swept past Stacey and played a delightful chip with the outside of his boot into Mooy.

Mooy turned, created space and angled a shot past Ramsdale to put Albion two up. Fellow Aussie Maty Ryan was third to congratulate him, running the length of the pitch. 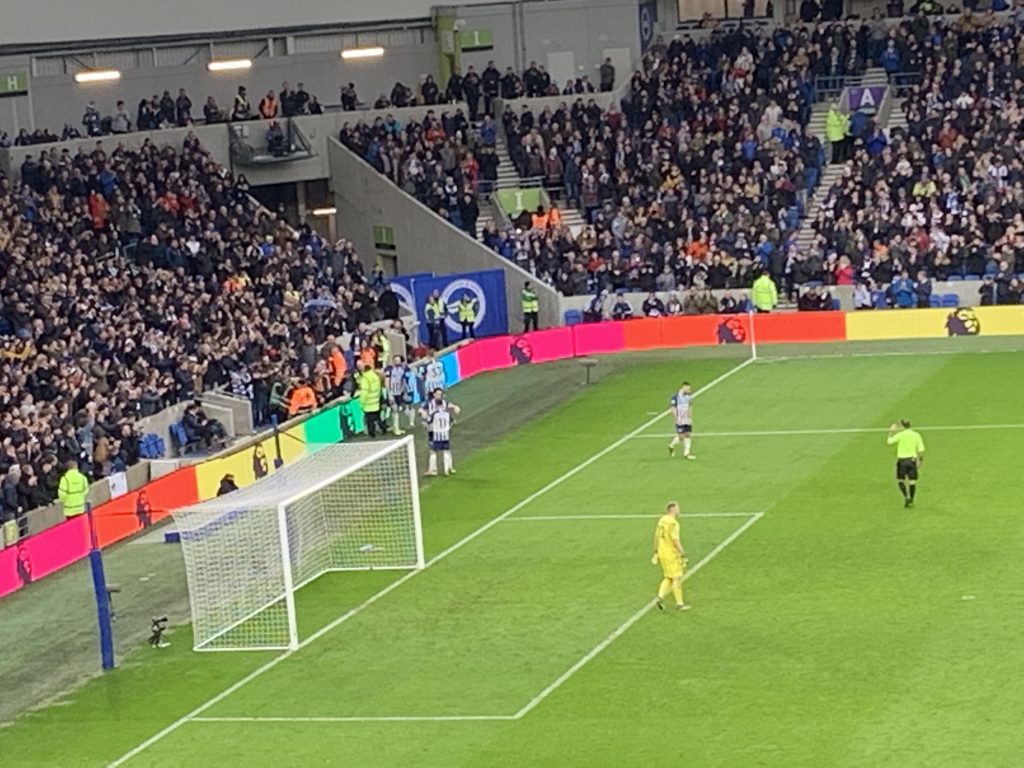 Stacey limped off soon after and with Glenn Murray on Albion tried for a third against the 10 men.

It didn’t quite happen although Murray and Maupay both had decent chances late on.

A vital win for Albion. The Seagulls take on Chelsea next at the Amex for their New Year’s Day clash in the Premier League with a 12.30pm kick-off.