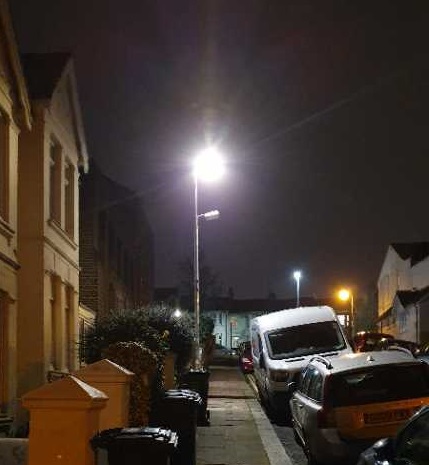 Residents have complained that some of the council’s new energy saving LED streetlights are too bright and are keeping them up at night.

The council started replacing its 18,000 lanterns around the city last year, and says the new lamps are set to save it half a million pounds every year.

But reports have been made via FixMyStreet that some of the new white lights are overpowering, and more suited to lighting main roads than residential streets.

“The new LED lamp is a good meter higher than the one it replaced and this one appears better suited to lighting an A road than a residential street as it has no cowling on it.

“The resulting flood of light is overpowering to look at and is adversely lighting up the houses around it.”

“This is right opposite my bedroom window and at night with curtains drawn make the room bright!”

The new lights emit a white light which allows objects and people to be identified more easily compared with the light from a traditional lamp, will also reduce the city’s energy consumption and require less maintenance.

In December, the council had replaced 100 lighting columns and is replacing more at a rate of about 600 a month. In 2018/19, emissions from street lighting electricity use fell by more than 20% compared to 2017/18

The project, which will eventually save the city council £500,000 a year, does not include any plans to replace the city’s historic cast iron columns. It is due to be completed in 2021.

Chair of the Environment, Transport and Sustainability Committee, Anne Pissaridou said in December: “The council is committed to its plan to be carbon neutral by 2030 and this project will certainly help to achieve that goal.

“It’s good to know that with each lantern replaced, the city’s carbon footprint gets a little smaller.

A council spokeswoman said this week that problems with street lights, including if they’re too bright and shining into someone’s house for example, can be reported here: https://www.brighton-hove.gov.uk/content/a-z/a-z-pages/street-lighting

Father diagnosed with coronavirus in Brighton