Nearly 8,000 runners brave wind and rain for Brighton Half Marathon

Nearly 8,000 runners braved the wind and the rain to take part in the 30th anniversary Grand Brighton Half Marathon organised by the Sussex Beacon.

Between them they are estimated to have raised about £1 million for 35 charities, with the event being the biggest fundraiser of the year for the Sussex Beacon.

The Beacon is a Brighton charity providing services for men, women and families living with or affected by HIV across Sussex.

Despite the weather, thousands of supporters turned out to line the 13.1-mile route, cheering on those taking part.

David Knight, who won the original race in 1990, sounded the starting klaxon at 9.30am, with Brighton DJ Fatboy Slim – aka Norman Cook – waving off the runners.

The route took in the cliff tops of east Brighton, the Royal Pavilion, the i360, the beach huts along Hove seafront and the Palace Pier before runners reached the finish line back in Madeira Drive.

Brighton runner Kevin Moore won the men’s race in 69 minutes and 5 seconds. He was followed by Neil Boniface, who finished 12 seconds later, and four-time winner Paul Martelletti in third in 69 minutes and 40 seconds.

Phillipa Williams won the women’s race in 77 minutes and 55 seconds. Heather Noone came second with a time of 79 minutes and 53 seconds. And third place went Maisie Trafford in 81 minutes and 8 seconds.

The Sussex Beacon Wheelchair Race was won by Gary Cooper in 80 minutes and 49 seconds, with Rob Smith second in 92 minutes and 25 seconds. The female winner was Ellie Page, a local, who crossed the line in 96 minutes and 39 seconds.

The organisers postponed the youth race because of the high winds but hope to reschedule it for later in the year.

Race director Martin Harrigan said: “What a race we had today! We are deeply honoured that nearly 8,000 runners braved the high winds and stormy conditions to run the Grand Brighton Half Marathon this morning – so many inspiring people, running for fantastic causes.

“Thank you to all families, spectators and volunteers who came out today to make the Grand Brighton Half Marathon such an incredible event. We couldn’t be more grateful to you all.

“I would also like to say a huge thank you to our headline sponsor, the Grand Brighton hotel, and all of the other sponsors and charities who support this fantastic event.” 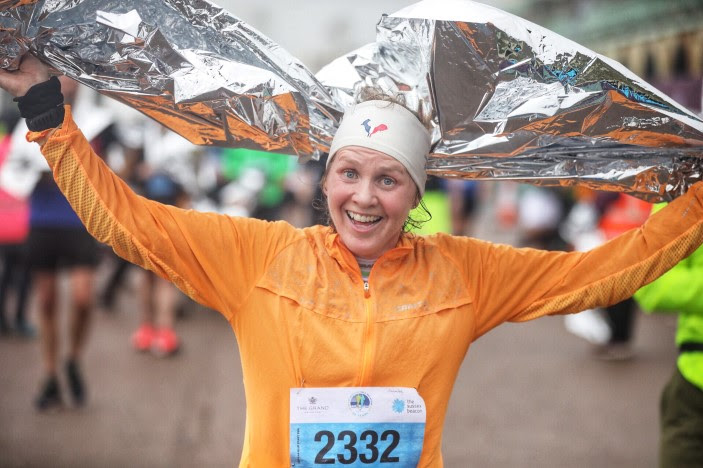 Grand hotel general manager Andrew Mosley said: “We couldn’t be more thrilled to have been headline sponsors of the Grand Brighton Half Marathon for our third year.

“It’s an incredible sight to see so many runners come from far and wide for such a fantastic event supporting great causes.

“Your contributions to the Sussex Beacon and all of the other race partners is immensely valued, particularly on this year’s 30th anniversary celebration.

“The race village had an amazing atmosphere once again and it was a real privilege to greet runners at the finish line. Well done to everyone who took part in this year’s race.”

For more on the race, visit www.brightonhalfmarathon.com.