Zuzu’s Brighton debut is ‘All Good’ 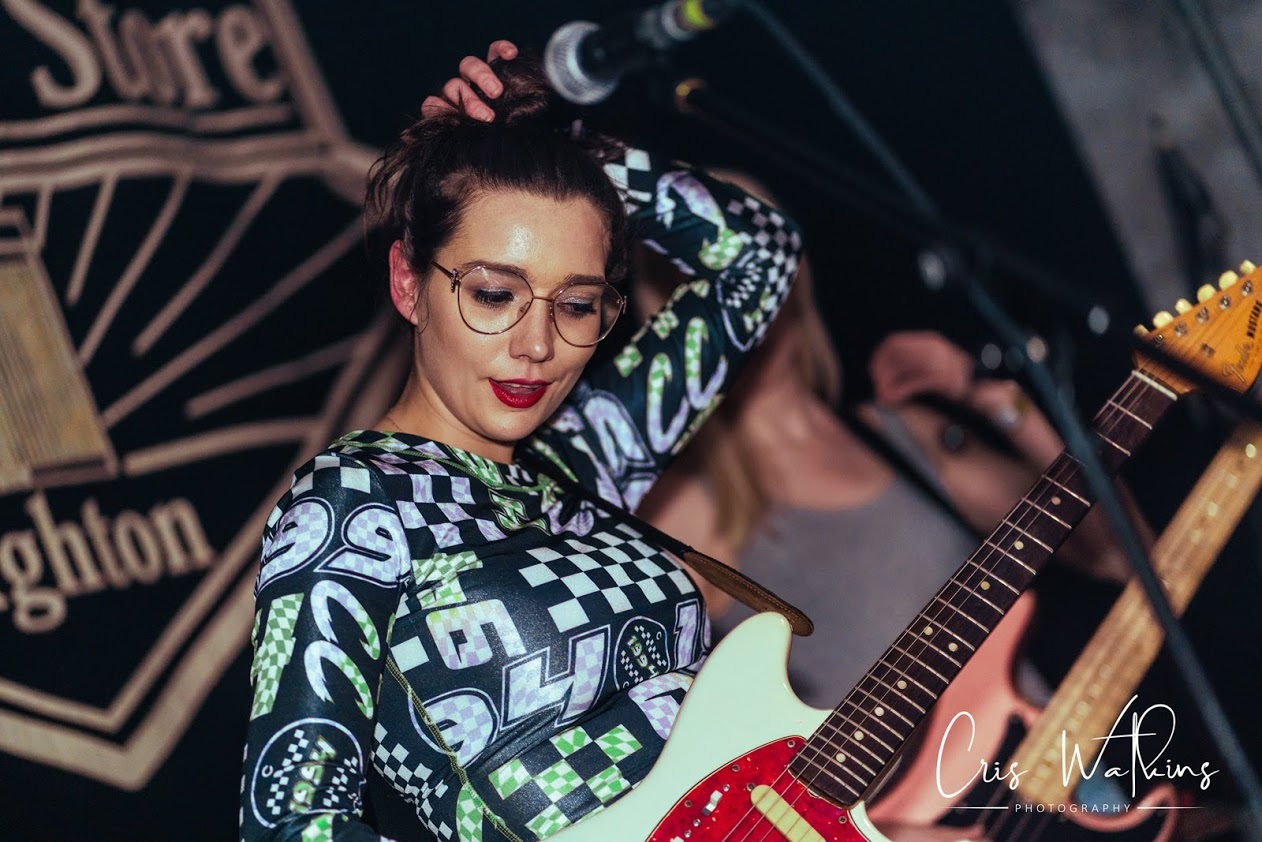 I first saw Zuzu supporting SWMRS in Camden in March 2019. Since then, I’ve been raving about her to anyone who’ll listen, single handedly she was the best support act I saw at any concert last year. Afterwards I had the pleasure of speaking to her and she’s so lovely and genuine. We spoke about her illustrations and how great her sequin dress was, which she then let me stroke! We took a photo together, but unfortunately I’m a sweaty-mosh-pit-mess with eyeliner doodles smudged across my forehead! Our second photo together was marginally better, shame I can’t keep my eyes open! I’ve been looking forward to seeing Zuzu headline a show, and she didn’t disappoint.

This was my first time visiting the Green Door Store and I was very impressed. I loved the stonework floors and décor, it had an indie feel, making it the perfect venue for all three acts. It definitely added to the overall ambience. Also, I always appreciate gender neutral toilets and a cloakroom which isn’t overpriced! 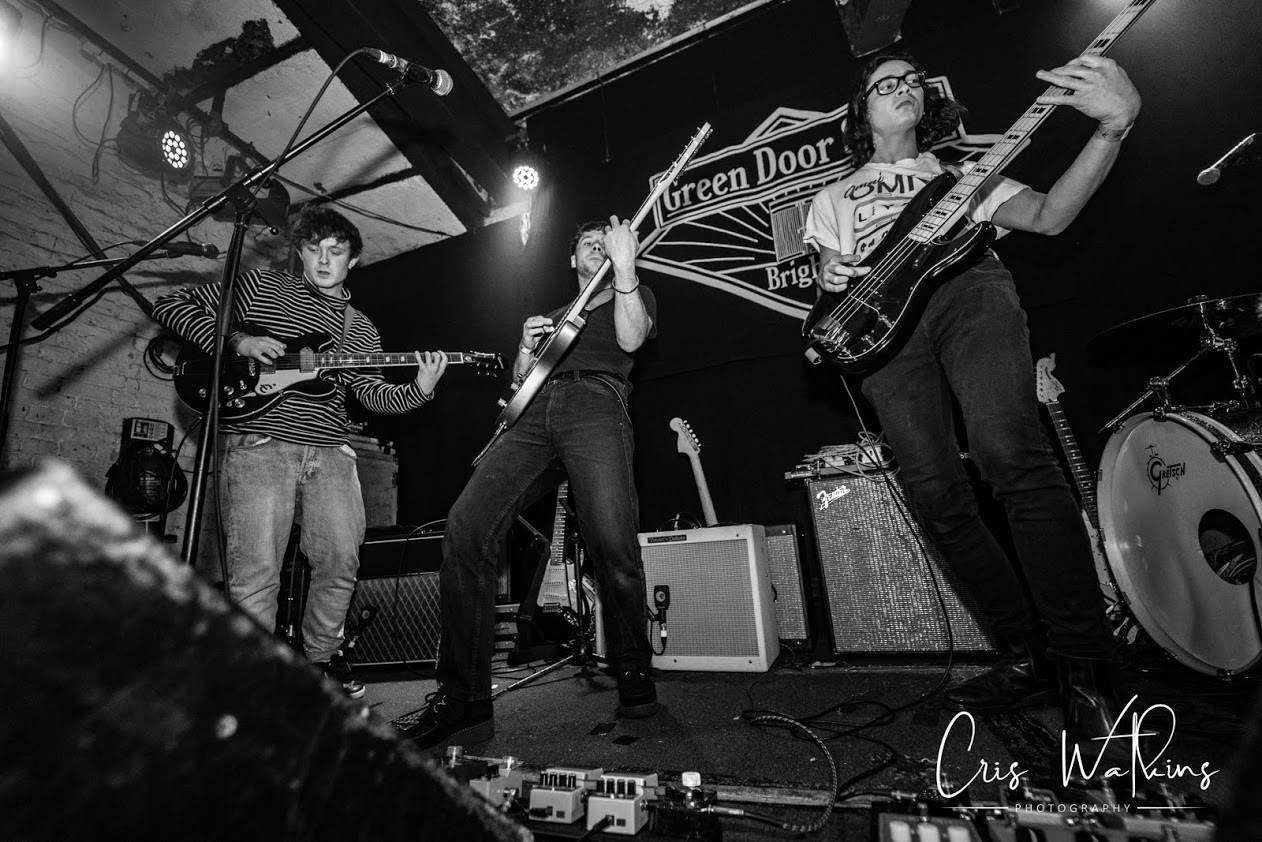 The night opened with Brighton boyband Comforts taking to the stage. The four-piece indie band consists of Samuel Dembowicz (vocals/guitar), Simon Metcalfe (vocals/guitar), Alfie Webber (vocals/drums) and Jamie Thomas (bass). Comforts first hit the music scene in 2018. In 2019 they released two singles, ‘Message To The Night’ and ‘Haircut.’ Their most recent single, ‘No Money’ debuted earlier this year. Their recognition continued to grow, with BBC Introducing playing their single ‘Hair’ on the radio for the first time. The boys are playing ‘Hidden Herd Festival’ in Brighton on 23rd March, (purchase your tickets HERE) the perfect way to get your festival fix whilst supporting local artists. Following three sold out shows in Brighton’s ‘The Rialto Theatre’ and ‘Komedia’, the boys plan to release more new music over the upcoming year.

Comforts were due on at half past seven, and I was worried when at twenty past the only people in the room were me and my sister! Thankfully minutes later the room started to pack out! I was impressed with the chemistry between the boys, you could tell they were friends rather than purely bandmates which creates a nice atmosphere. Afterwards, we found out that the boys had been playing together since college which is impressive given the rate at which college bands break up! My favourite song from the set was ‘Lost In A Moment’, I’m hoping it will be released on Spotify soon! I was impressed to see the drummer sing back-up vocals, it’s something I’ve never seen before and I couldn’t stop looking at how intricate his drumming was! It takes talent to multitask like that!

It’s always great to see local talent as a support act, and I’ll definitely keep Comforts on my radar as a band to catch in the local area. One of my pet peeves is people not showing up for support acts because it’s the best way to find new music, it’s how I found tonight’s headliner Zuzu after all! It was brilliant to see such a good turnout for a support act, everyone responded very well to the boys and we weren’t afraid to take to the front of the room after some prompting! Comforts held the room and made us all want to dance along, I thoroughly enjoyed their set. 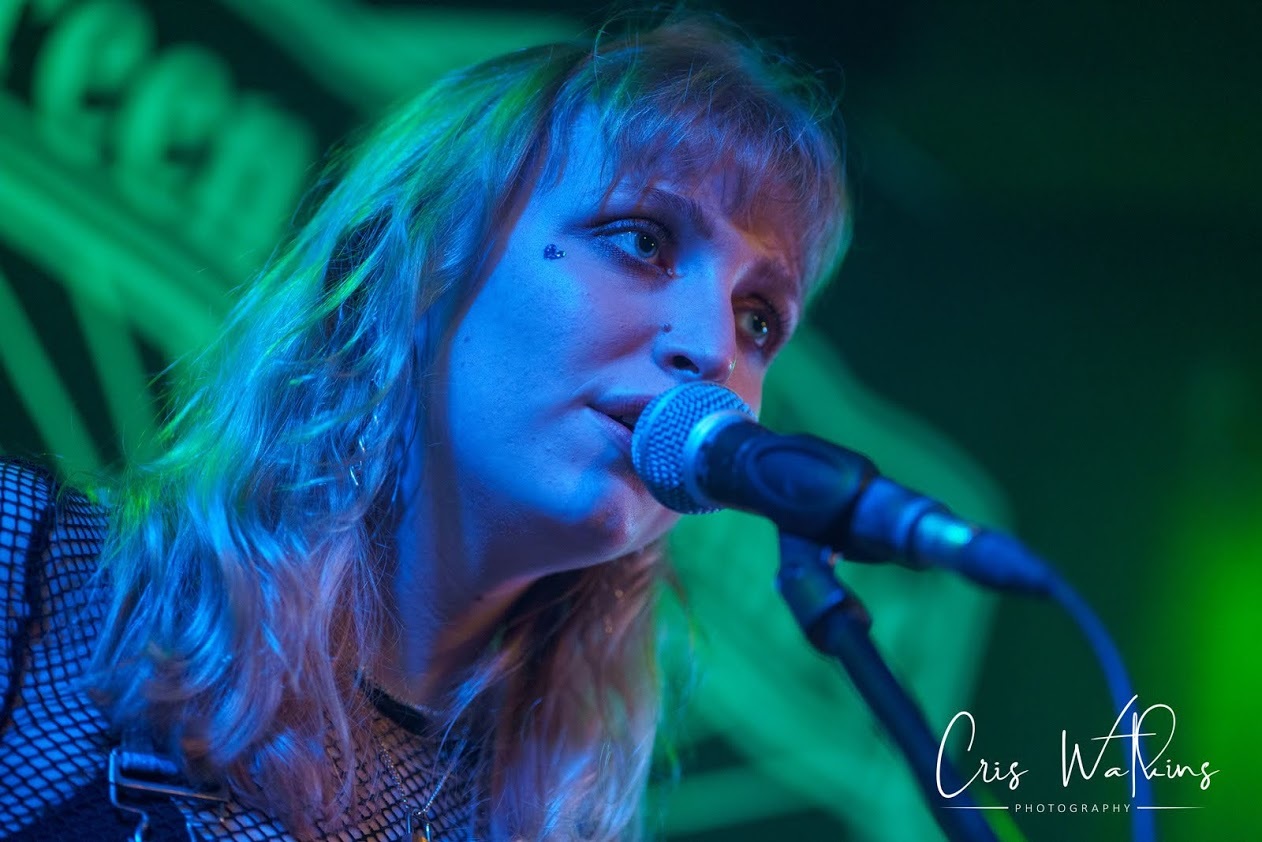 Second act this evening was Abbie Ozard, a Manchester born indie-pop singer-songwriter. Ozard began independently releasing music in 2018 after winning a songwriting competition. Since then, Ozard has been supported by BBC Introducing and DJ Chris Hawkins, culminating in the release of her first single ‘Average Disguise’ in 2018. Ozard released her first EP ‘Growing Pains’ in 2019 and is set for more new releases throughout 2020, with her new single ‘Crocodile Eyes’ released earlier this year.

Ozard is hot on the festival circuit, performing in Brighton again at The Great Escape Festival on 13th May, grab tickets HERE whilst you still can. If you’re looking to travel further afield Ozard is playing at Liverpool Sound City, The Great Escape Festival Glasgow, and Live at Leeds Festival. Ozard is performing at 2020 Truck Festival, in an interview with the festival press she said “ideally I want to see sad girl bops take over 2020” which is a sentiment I can completely get behind! Indeed, sad girl bops were provided. I expected her alone on stage with an acoustic guitar. To my surprise, there were three electric guitars! Her music distinguished itself from other sad girl songs because of the electric guitars paired with such a soft voice, but it worked so well.

I had been streaming her most recent single ‘Crocodile Tears’ before I knew she was playing tonight as it came up on my Spotify ‘recommended for you’ list. It was my favourite song from her set, very closely followed by ‘Favourite Thing To Lose’ and ‘Pink Sky.’

It was Ozard’s first performance in Brighton and I hope it isn’t her last. I definitely want to see her again; I can see her headlining her own tour in the near future and I look forward to it. I also have a lot of respect for someone who can pull off dungarees as well as she could! I would recommend her to anyone who likes Dodie, Orla Gartland, and anyone who captures indie sad girl vibes! 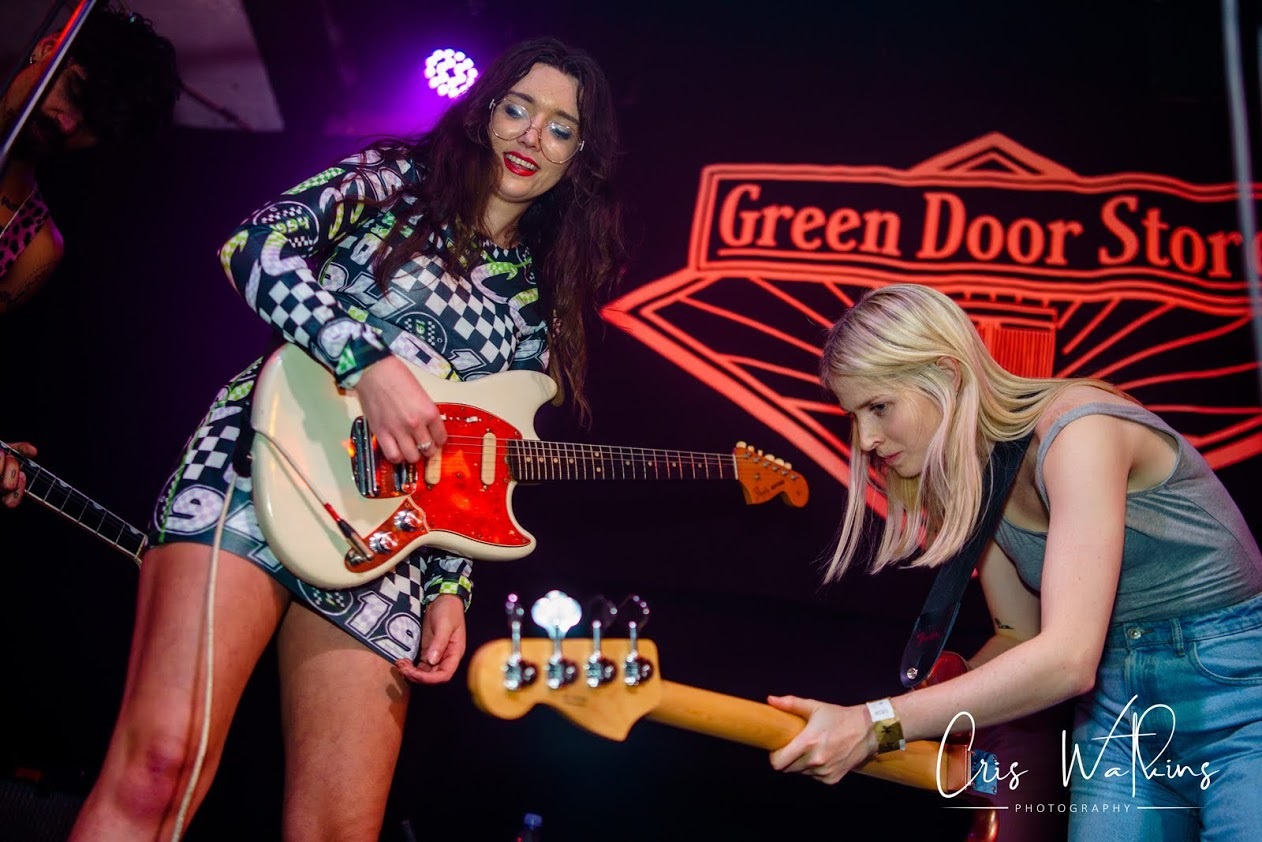 Next saw headliner Zuzu hit the stage. Liverpudlian artist Zuzu, who is yet to disclose her full name, first appeared as Zuzu at the FestEvol emerging-artists festival in August 2015, shortly after she supported Courtney Barnett at the O2 Academy. In 2018 she signed with Virgin EMI Records, releasing her first EP ‘Made On Earth By Humans’. She released three more singles in 2018, Christmas song ‘Distant Christmas,’ ‘Dark Blue’ and ‘Can’t Be Alone.’ Another four singles in 2019, alongside supporting SWMRS on their UK tour, saw Zuzu’s popularity rise. Her most recent single, ‘Skin And Bone’ released earlier in the year is a song she wrote at fourteen, really showing how dedicated she’s been to her musical career. Her EP ‘How It Feels’, in her words “the only thing I have to plug”, is due for release 3rd April 2020.

One of the best things about Zuzu is her Liverpudlian accent, adding a unique element to her songs, refusing to lose her accent is a wonderful trait – Zuzu is unashamedly herself. Songwriter, producer, director, actor, and comic book illustrator; Zuzu really is the full package. Not to mention her dresses are always perfect! Zuzu is a talented songwriter, each song has that one killer line which makes you want to scream it at the top of your lungs. Her alien sci-fi interest birthed a beautiful comic strip for her album ‘Made On Earth By Humans’. The lyrics on the album are clever with their references to alien lifeforms, whilst still being relatable. 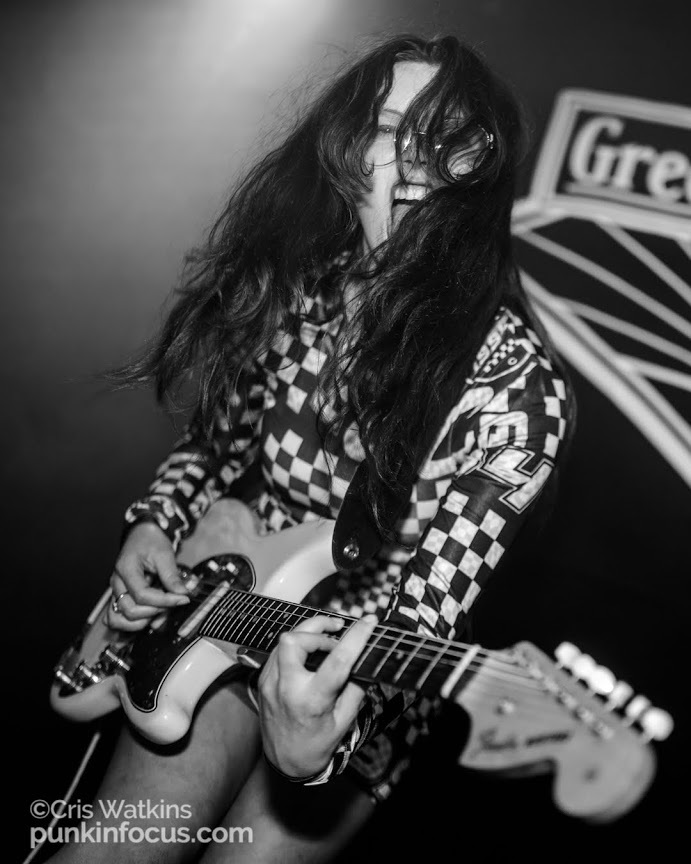 Zuzu played her full discography, apart from her Christmas song ‘Distant Christmas’, despite getting a request for it a few nights ago! Whilst it is a great song, February is a little early for festivities! Before the concert started she came over and spoke to us, she is a genuinely lovely person and she recommended a space documentary on Netflix which I’ll be watching later! After the concert she spoke to the fans, you know how much fan support means to her and the Zuzu fanbase is a lovely eclectic mix of people.

From the opening song, ‘What You Want’, you could see Zuzu isn’t just a singer, she’s a performer who connects with her lyrics. Her facial expressions fit every word, from eye rolling to brush offs, she captures the tone perfectly. Her voice is brilliant live, even with all the movement and energy she puts into her performance, her vocals are always spot on. Every time she introduced a song it was quirky and unapologetically honest. My personal favourite was the dedication to anyone with a student loan before playing ‘Money Back.’ As someone with an undergraduate and postgraduate loan debt (which I’ll be paying back for the rest of my life), I appreciated the dedication!

I couldn’t contain my excitement when I heard the opening note to Avril Lavigne’s ‘Complicated’, which was the best surprise cover I can imagine! Given that I missed out on getting Avril Lavigne tickets for April, it was great to hear that nostalgic tune live. Even when she messed up and sung the wrong lyrics it was absolutely hilarious and she handled it like a pro; “I said I’d do a cover, I never said it would be good!” Despite her claim, it was a brilliant cover and a lot of fun. 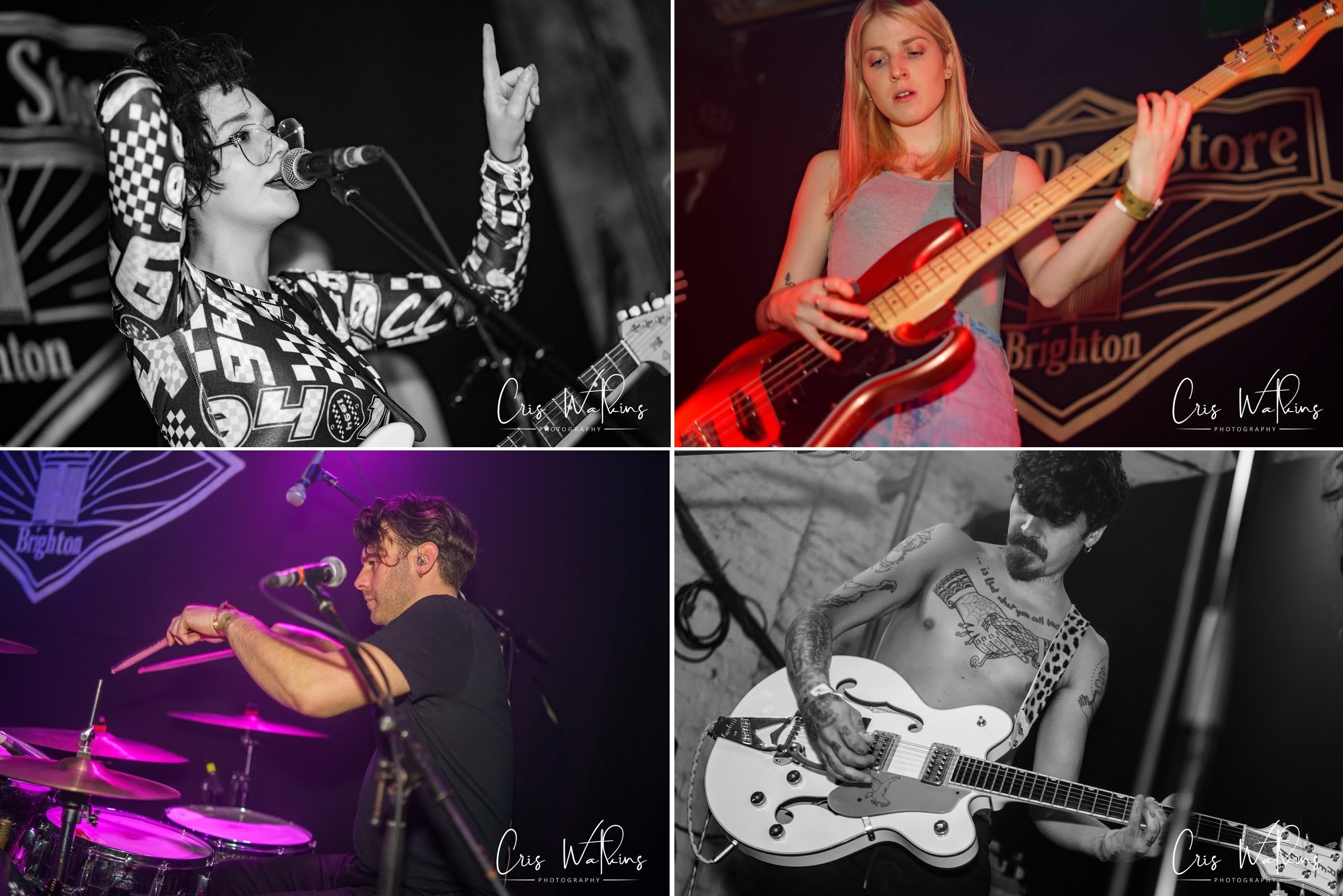 ZUZU and her band live at the Green Door Store, Brighton 24.2.20 (pics Cris Watkins Photography) (click on pics to enlarge!)

We were treated to two new songs, both of which were amazing. First was ‘Never Again’ which she played for the first time the night before. When she introduced it, she said this is the only the second time she’s played it so “forgive us if it’s a bit sh*t!” Far from it, ‘Never Again’ was actually one of my favourite songs from the night! It was such a powerful ‘screw you’ to anyone that’s ever hurt you, and her carefree attitude in the performance made it feel so personal and engaging. Her second new song, ‘Cool With Me’, features on her upcoming EP. It was another clever song about trying to break into the music industry when you don’t fit into the box of what’s considered popular, but refusing to be a sell-out by ditching the electric guitar. It captured the beauty of Zuzu’s music, her lyrics are about topics most don’t touch on, and they are always so well written they capture the story she’s telling.

The set finished on ‘All Good’ which was the perfect song to end on. I loved hearing this song live as it features my favourite Zuzu lyric: “Take me to your favourite planet, try my best to understand it, I don’t speak the language nor the tongue. Maybe we could start a family I could be an alien aunty. Maybe we could even fall in love without drugs.” It completely captures everything she’s about; unique lyrics and beautifully crafted space images. This song was amazing live, the space feeling was really captured through the amps and the dramatic drum pause made the drop hit even harder.

I absolutely love Zuzu and I can’t recommend seeing her enough. She really is a wonderful, talented, all round great performer. Definitely worth the sore throat I have this morning from singing so loudly! 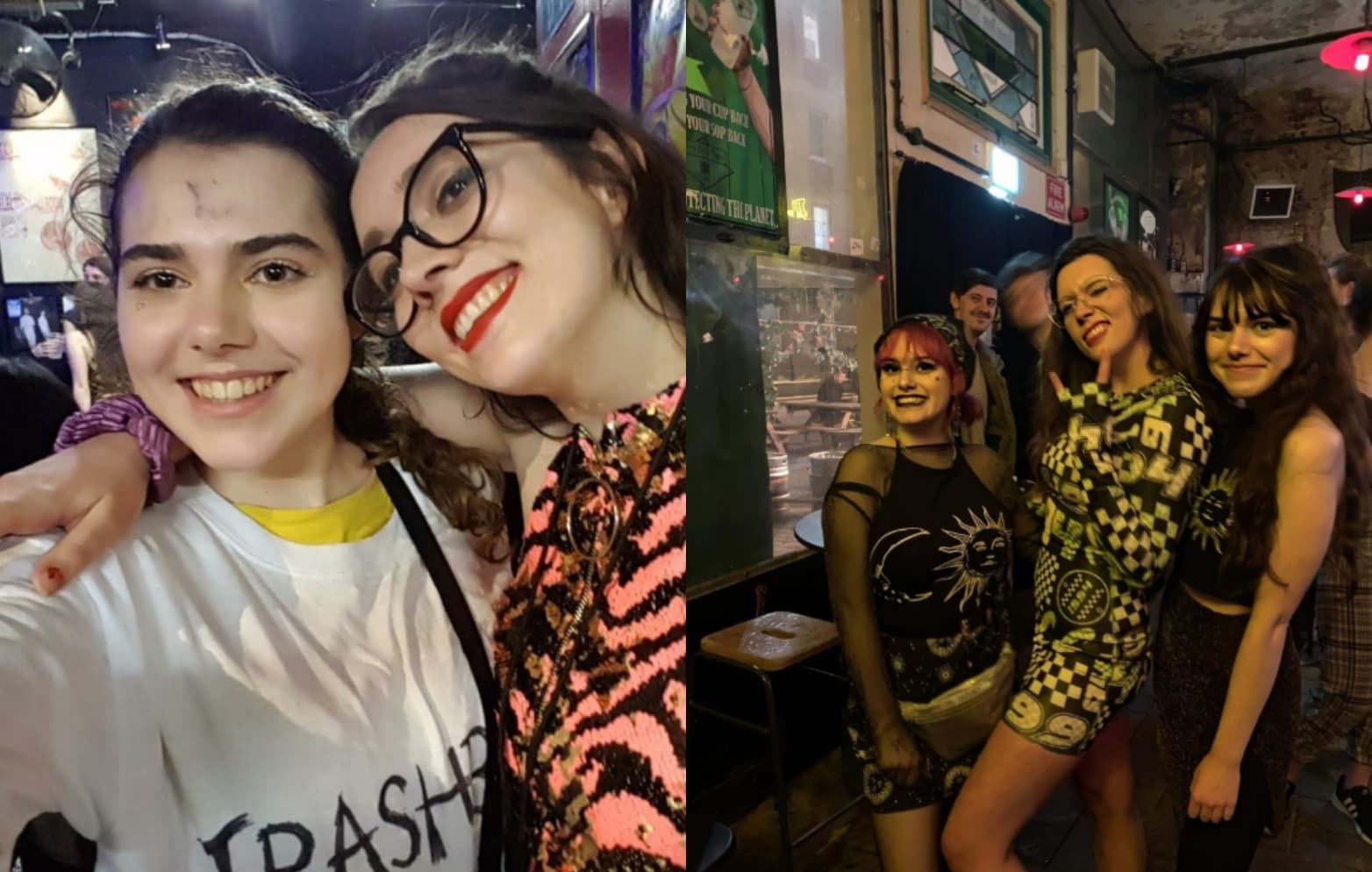 (Left) ZUZU and me in Camden 2019, (right) ZUZU with my sister and me at the Green Door Store 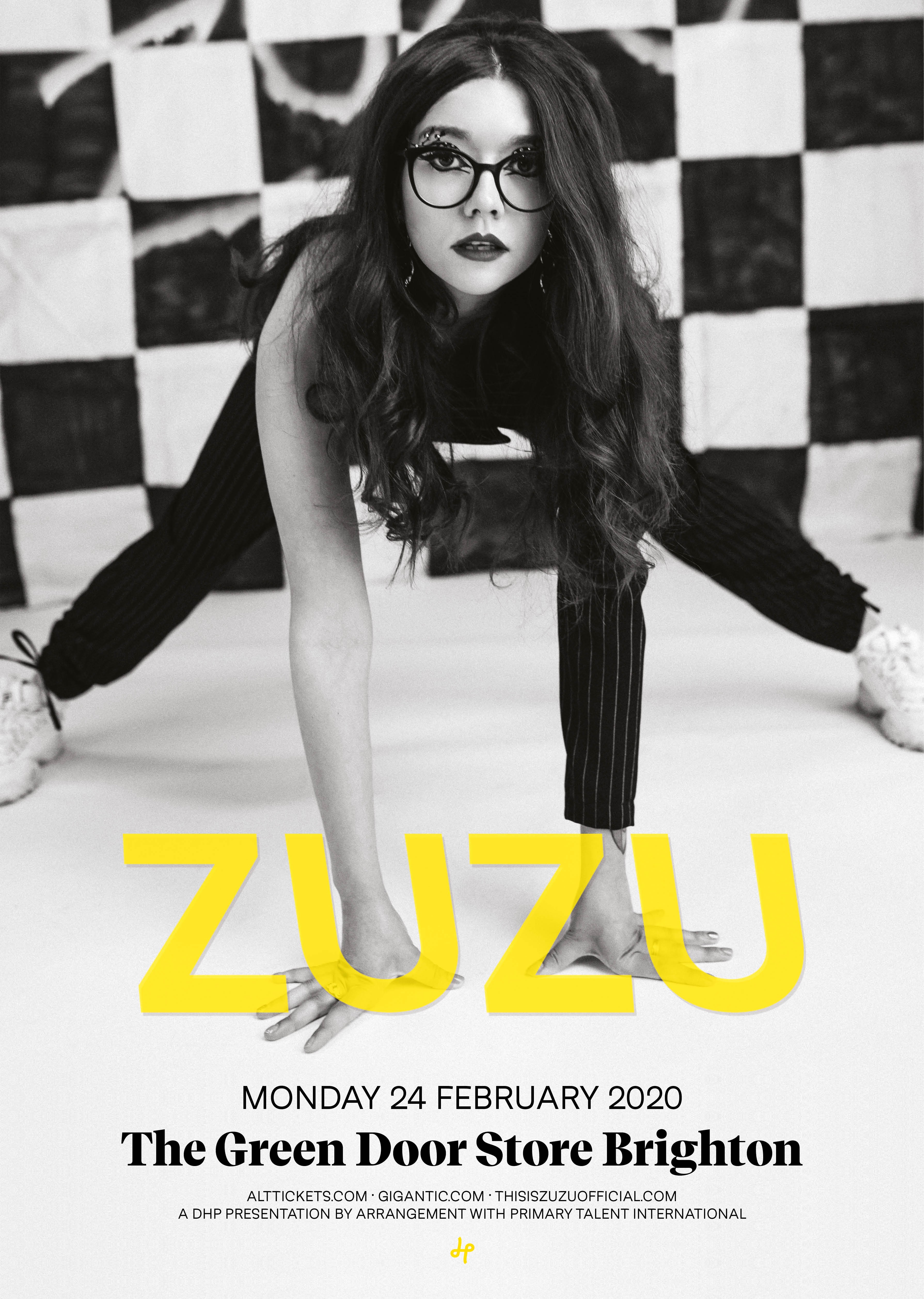