APRE – the new Tears For Fears? 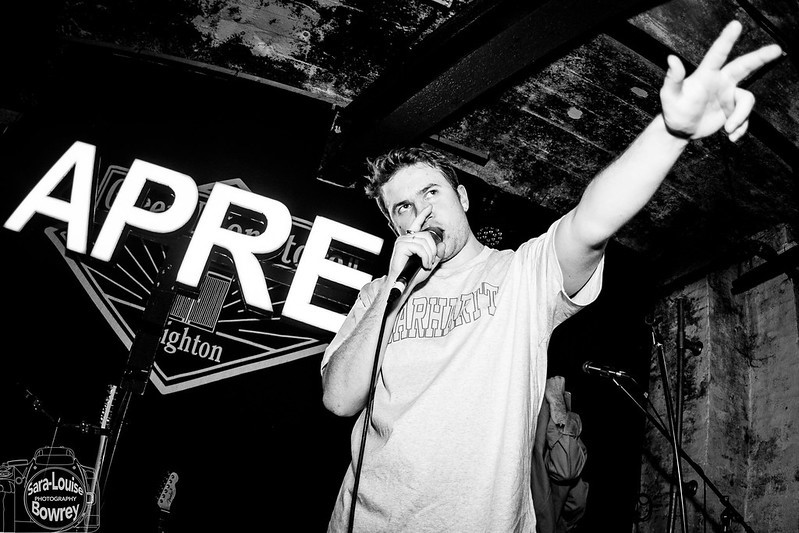 APRE were performing in Brighton tonight on the penultimate date of their 14-date February ‘Go Somewhere’ UK tour. Having already called in at Birmingham, Sheffield, York, Newcastle, Manchester, Liverpool, Leeds, Cardiff, Oxford, Bristol, Nottingham and Leicester, and so the band had most certainly perfected their musicianship by the time of tonight’s debut headline show in Brighton.

The band were performing at the popular Green Door Store, prior to them closing the tour at The Scala in London tomorrow night. The act on recorded material consists of Charlie Brown and Jules Konieczny and for live work they bring along their chums for that full-on sound.

The APRE duo are a reasonably new force, having formed in Kent in 2018. Their debut single ‘All Yours’ was released on 10th April 2018 and was followed by their debut EP ‘The Movement of Time’ on 25th May 2018. The lads have been rather prolific since then having unleashed a further nine singles and a further four EP’s, but as yet no long player. The music quality of these releases if packaged together into a (double) album would easily have the feeling of a greatest hits package – they are that consistent. 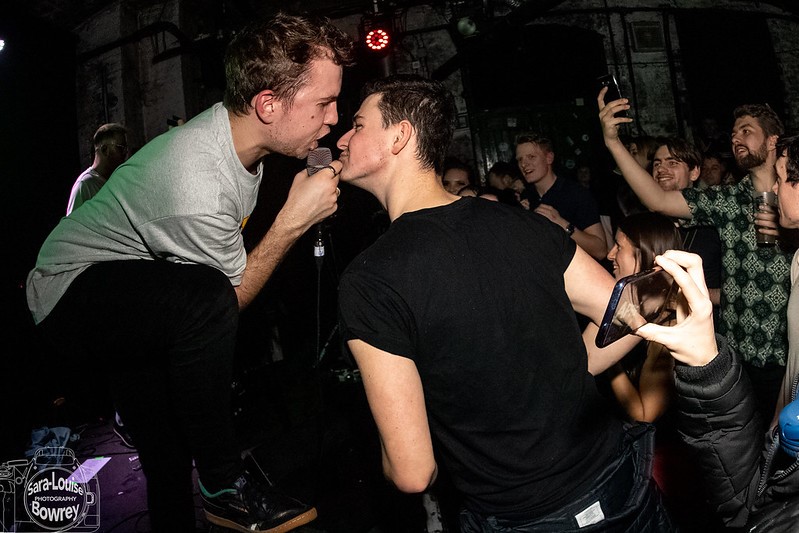 The latest release which saw the light of day at the end of last month (January 2020) is ‘Your Heart’s Like A Jungle’, which is available now on Polydor Records. This tune is my favourite of theirs and it’s the latest and so the future is looking very bright, especially with the Polydor backing and support across the board from Radio 1, 6Music and Radio X.

This London-based band have been working hard by cutting their teeth by touring with the likes of Sam Fender, Friendly Fires, Inhaler and Lany. They are shaping up nicely in becoming a formidable live force of their own as us lucky punters witnessed this evening.

The APRE co-vocalists Charlie and Jules apparently met in a West London chess club and are as inspired by the socially conscious, observational lyrics of Pet Shop Boys and the alternative indie of Foals. They most certainly have a familiarity to their sound of the best parts of what has gone before such as the likes of Tears For Fears, Talk Talk and even the Madchester Britpop bands. Their music is immediately likeable and demands to be put on repeat as I am doing this very moment on their Soundcloud page – come enjoy it with me HERE.

At 9:29pm the band takes to the raised Green Door Store stage to the sound of their intro tape, the place is as you would expect totally rammed. The audience are mainly in their 20’s I would surmise. The set-up is drums along with electronic drum pads, guitar, Nord Electro 6 keyboard, bass, and further keyboards. 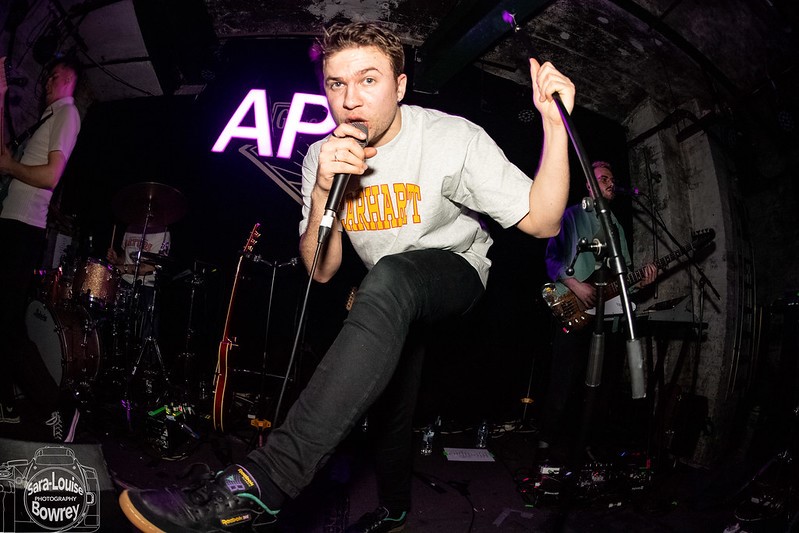 They begin with my fave the new single ‘Your Heart’s Like A Jungle’ which sets the tone very nicely indeed and I’m praying that it’s not downhill from here. Nope it certainly wasn’t. Although their sound is reminiscent of pleasant songs from the past, they have a modern vibe and their sound is very NOW!

Tonight is a special night for their pal Stephen on bass and keys as it is his birthday. In a few weeks time their new single will be superseded by ‘Go Somewhere’, which has a pleasant poppy vibe going down. Max from ‘Year 6’ gets a mention, but not a favourable one. The guys wrote a tune about him titled ‘Gap Year 2008’, whereby they informed us the prior to his gap year he was a great bloke, but after his gap year he had become a totally different person.

The catchy tunes kept on coming and the crowd around me were singing along to all of the words. Clearly they have a loyal following. There were ‘whoops’ in between each tune and the atmosphere was fun. The crowd was invaded when one of the guys joined us during the number ‘Come Down’, which heightened the atmosphere further and they had taken it up several notches. Prior to that we had witnessed a new version of ‘Don’t You Feel Like Heaven?’.

This is clearly a band on the way up. Dare I say it, that at times there is even a slight Coldplay feel to their work especially on ‘Don’t You Feel Like Heaven?’. I really enjoyed the drum pads on their final number ‘Dreamworld’. My only criticism is that we didn’t get to hear the terrific ‘Lovers Living It Right’, with its Gary Numan-esque keyboard sound circa 1980’s ‘Telekon’.

APRE will be a name that I am sure that you will be hearing a lot more of over the next year. I half expect them to be dominating the radio friendly airwaves throughout the land by this time next year! So jump aboard now and beat the masses! 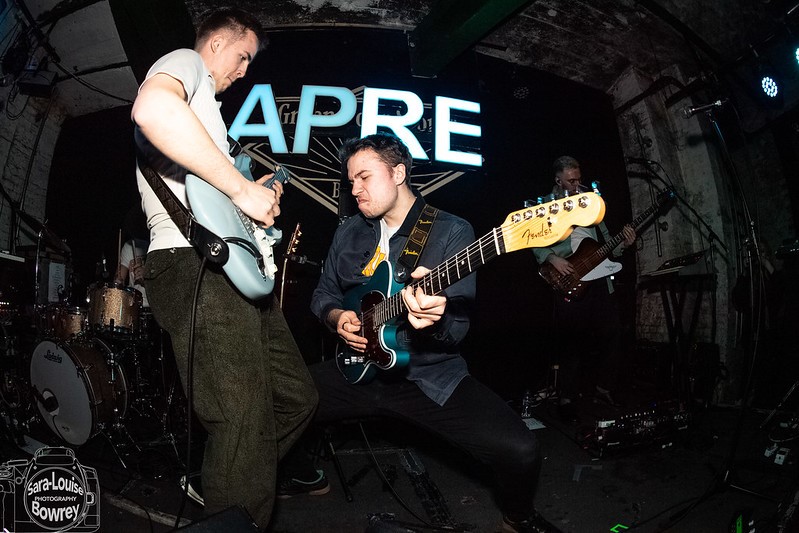 Find out more about APRE – www.apremusic.com 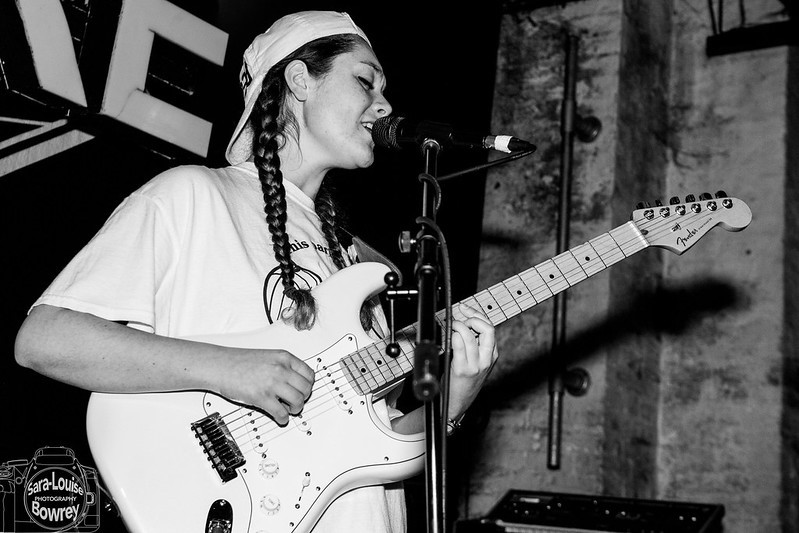 On stage this evening it was just Polly, her reversed white cap and long plaited hair, her guitar, and her continuous smile, as she entertained us with her 8 compositions. The pick being ‘TWNTYS’ which certainly deserves to be sitting in the Top 5 UK singles chart. Record company talent scouts take note – watch the video HERE. Record company talent scouts take note!!! Smooth eh?

For me personally, I’m not a massive fan of the chart friendly soul vibe and I discussed this with Polly, but boy I can certainly spot talent and “Record company talent scouts take note” – here it is!

Historically speaking we are arguably moving in the realms of Sade and Minnie Ripperton (but not that high note). Polly’s continuous smile filled the room, and shame of you that didn’t get down early to check her out. Those in attendance stood motionless and absorbed everything they were fed. I know certain people that would be raving about her if they had seen her live. 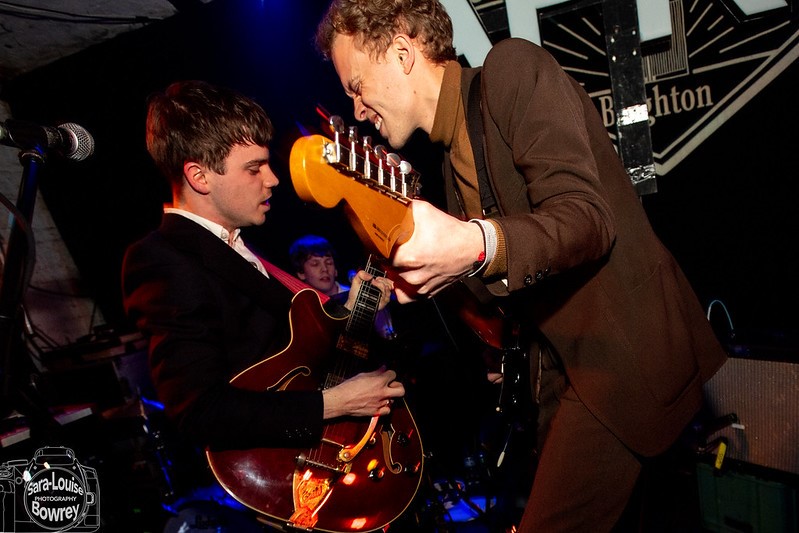 Next up were North London’s Weird Milk who are Zach Campbell, Charlie Glover-Wright, Alex Griffiths and ‘Blue’, along with I assume a guest bassist. Their format tonight was drums with backing vocals, guitar and lead vocals, guitar and vocals, bass, and keyboards. They have been selected as main support for half a dozen of the APRE tour dates and Brighton being one of them.

The venue was now starting to fill up quite a bit more and the suited and booted smart Weird Milk steered us through seven of their compositions, with song three ‘Is That Love?’ having been released today. They refer to themselves as “Blockbuster pop”, but I can’t honestly see that myself. I was endeavouring to ascertain exactly who I could compare their slightly quirky outlook like and all I could come up with was definitely 10cc and possibly Supergrass. Their timing as a unit was quite possibly the envy of many acts, but for me personally a far cry from APRE.

Weird Milk setlist:
‘We Were Strangers’
‘Honey I’m Around’
‘Is That Love?’
‘Time Machine’
‘Telepathy’
‘Better’
‘Anything You Want’ 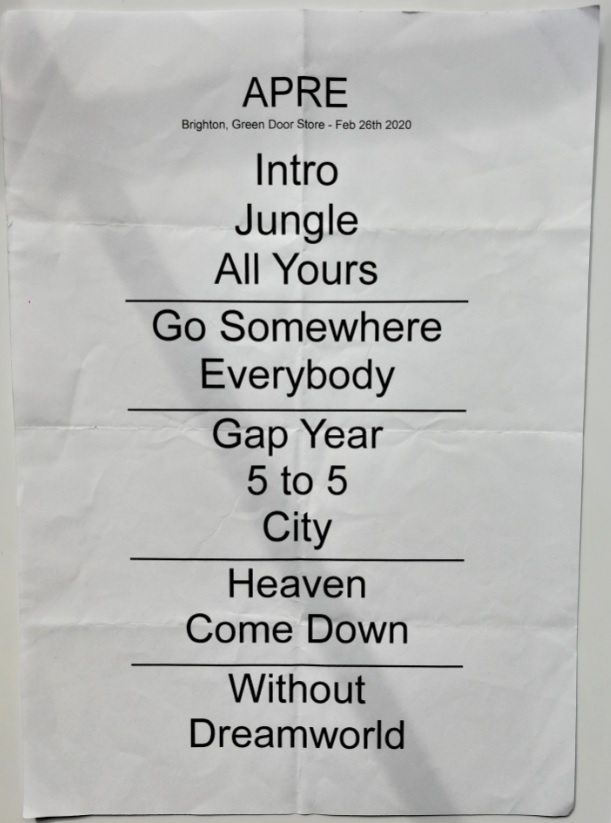 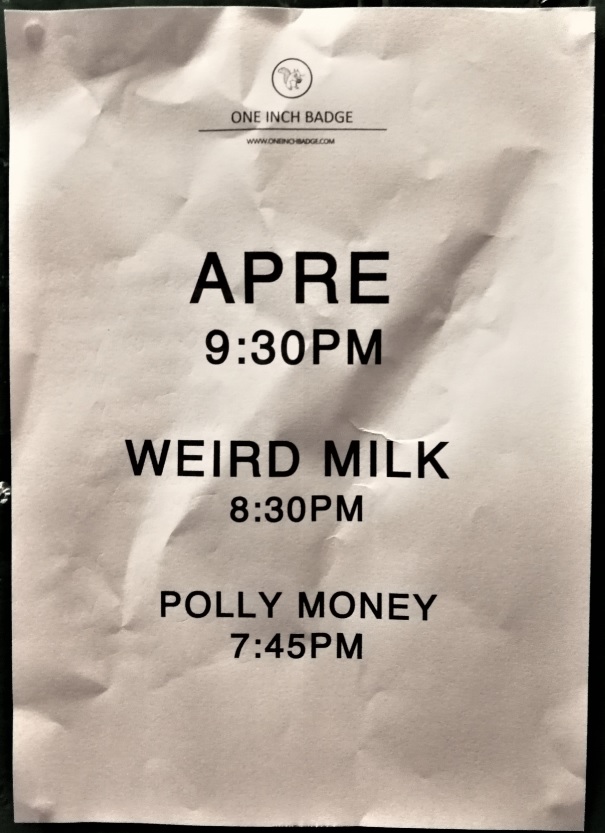 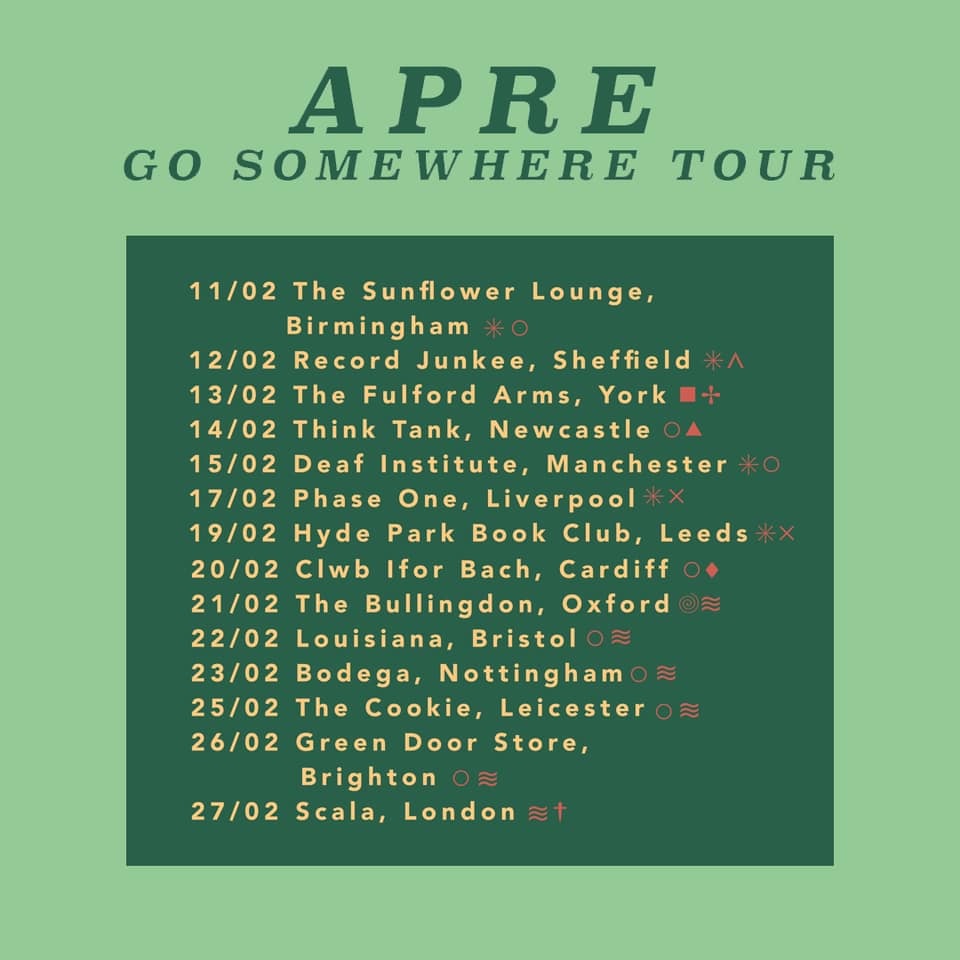