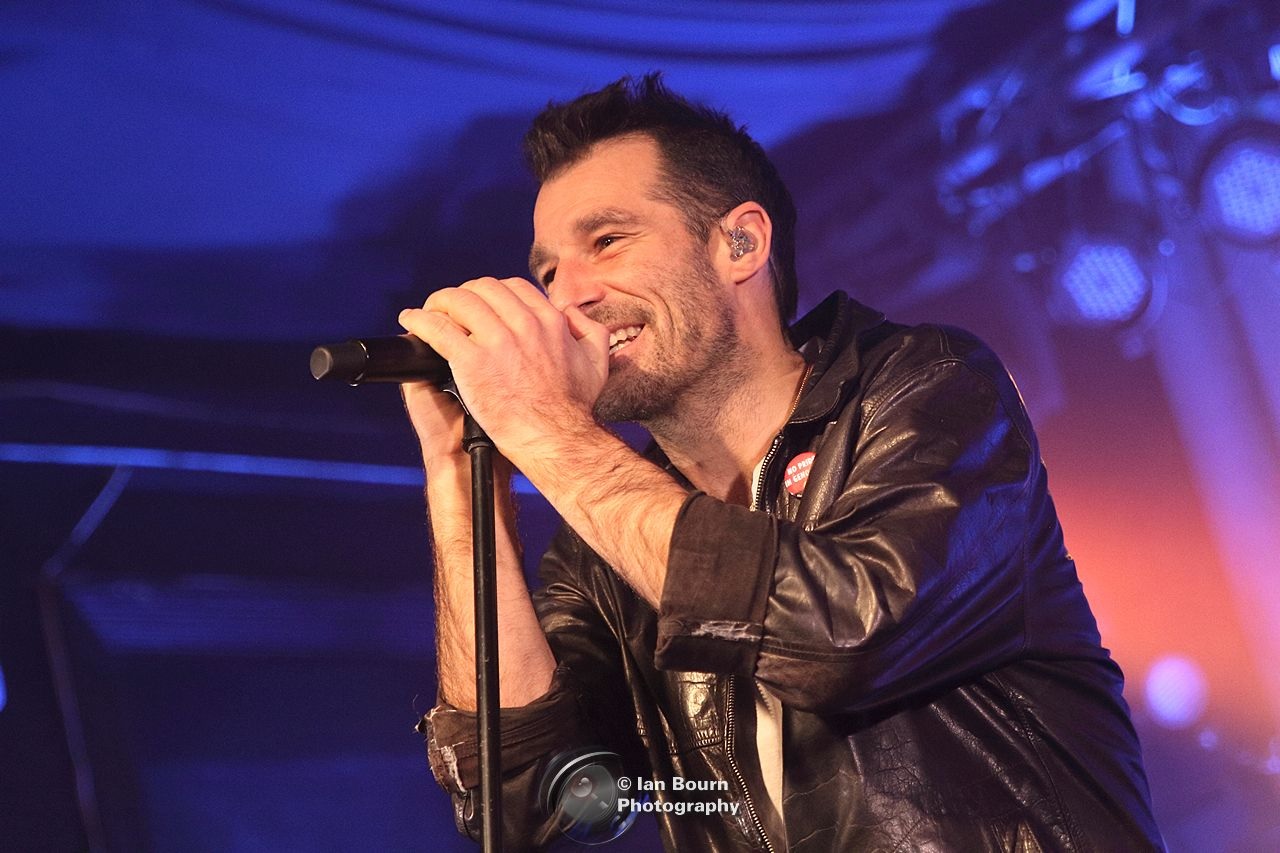 Our evening out in the City tonight was opened up by Lucy Lu, who was performing on stage in Brighton as guests for The Cat Empire. The popular Concorde 2 music venue had started filling up early. It was a Saturday night and the 10pm curfew always means an earlier start. It was reassuring that the Concorde 2 had taken the Coronasvirus outbreak pretty seriously, as there were bottles of hand sanitiser everywhere, and it was good to see people using the stuff. 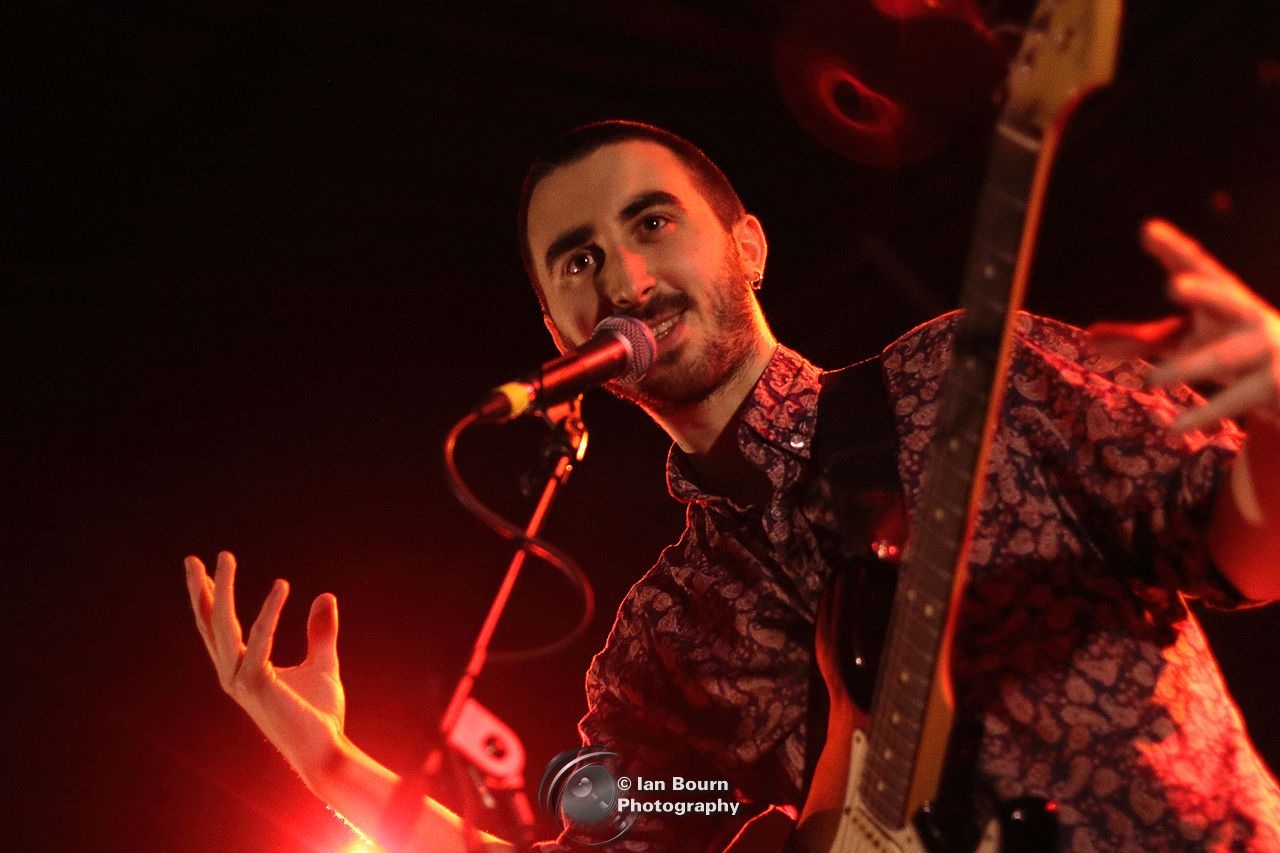 Lucy Lu–at its heart is a musician called Luke Bower. Luke, whose stage persona/handle is Lucy Lu. He has been involved in a kind of new wave jazz sound recently. He has also played guitar with Puma Blue and strapped on a bass guitar with an outfit called Nilufer Yanya.

I always enjoy hearing new music and Luke has perfected what he does,however tonight he was on his own as the band for a variety of reasons couldn’t make it, which was most unfortunate. He was asked why Lucy Lu, and his reply “Charlie’s Angels, naturally”.

His set started as he casually walked out onto the stage smiling and thanking everyone for coming. He explained he was on his own for tonight and was therefore shortening the name to Lucy or maybe Lu. No band or brass with him.

‘Insomniac’ got things under way. The smoke opened up and surrounded Lucy Lu with some deep red lighting. He delivered the opening song perfectly. His voice is so rich and mixed in with the one guitar it was delightful.

One of his latest releases ‘Crucial’ was in the set. It was good to hear this great tune stripped back and almost unplugged. It made it sound very different to the single release or indeed the video for the song.

He stepped things up a bit for the last songs of his set, as he said it was easy just to do slow songs when you are on your own. His songs are well constructed and he performed really well considering it was new territory for him without the band. The set ended with ‘Adonis’.

This guy is worth checking out. He held his audience throughout his set which was no mean feat as to what was about to be unleashed. Well played, I would love to see what you do with the full Lucy Lu crew! 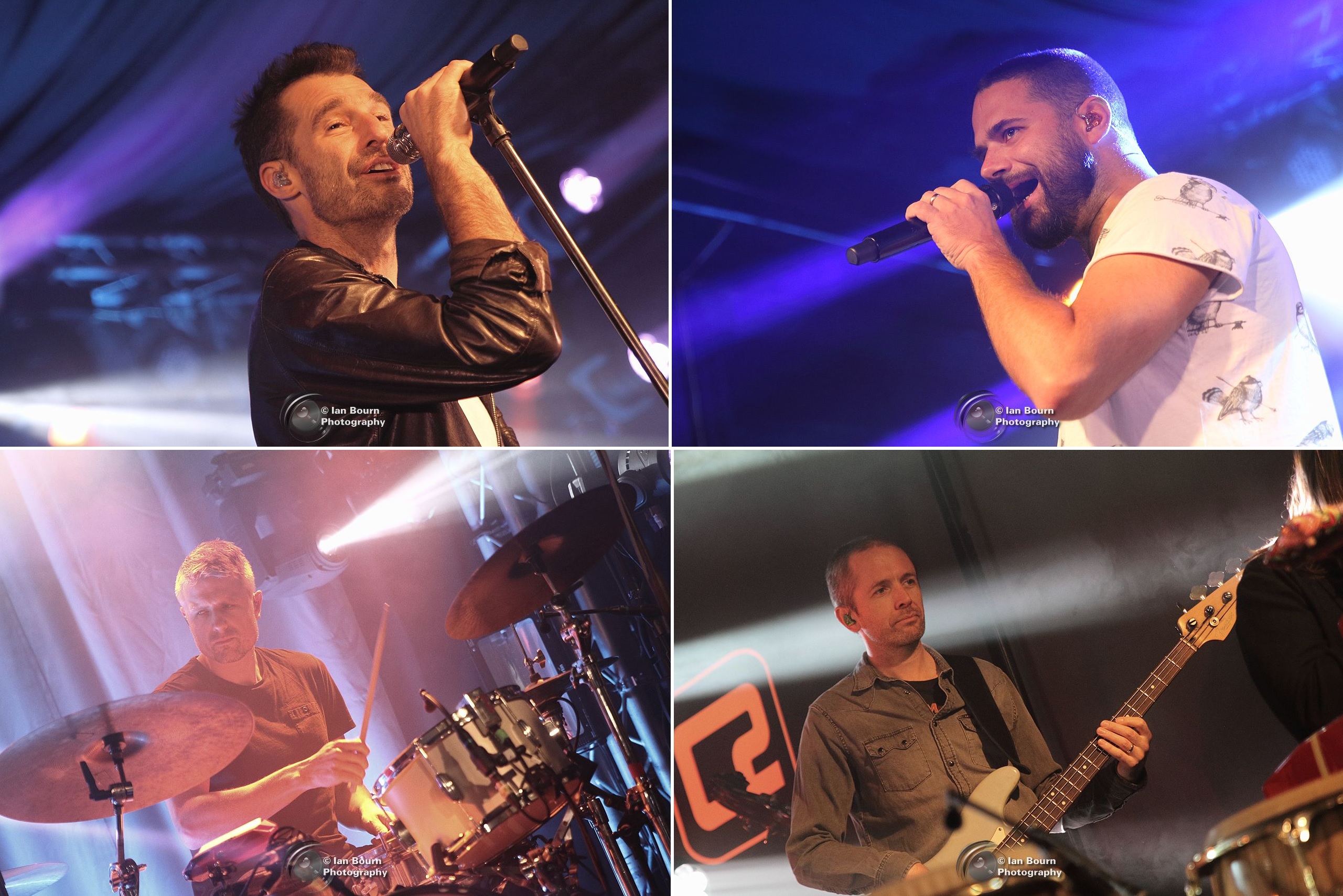 Cat Empire are celebrated as one of the worlds very best festival bands, The Cat Empire deliver a spectacular live show, legendary for making their vast global audience dance.

Formed in Melbourne, Australia and adored the world over, The Cat Empire is a musical success story that continues to be written. After the release of their most recent album ‘Stolen Diamonds’ (Feb 2019), their stratospheric trajectory continues as the band craft infectious, genre-embracing anthems and play hundreds of world-class, awe-inspiring shows a year, while sustaining and growing an army of ardent fans at home and abroad.

Tonight was going to be a special one. It was a sold out event and the Concorde 2 crowd was pretty much packed in tight. So many people, it became clear, were out for a good night, a rumba fuelled party. It was not clear when some of the Brighton venues were to close due to the virus, so those out tonight were sure of a great night. They got one!

Their core members are Felix Riebl (percussion and vocals), Harry James Angus (trumpet and vocals), Will Hull-Brown (drums), Jamshid “Jumps” Khadiwala (decks, percussion), Ollie McGill (keyboard and backing vocals), and Ryan Monro (bass and backing vocals). They are often supplemented by The Empire Horns, a brass duo composed of Ross Irwin (trumpet) and Kieran Conrau (trombone), among others. Their sound is a fusion of jazz, ska, funk and rock with heavy Latin influences.

The set kicked off with a bass rhythm as the keys joined in for ‘Kila’ and Felix jumped onto the stage grabbing the mic and as he hit the chorus the brass section fired up with the chorus and the crowd sparked up. I had a feeling tonight was going to be a hot one! What a way to start a show! Superb!

A track from the ‘Rising With The Sun’ album was ‘Wolves’. Again the driving percussion shone through, the brass and horns piercing the smoke with staccato blasts. This really was a sun drenched sound straight from the streets of carnival town.

‘In My Pocket’ hits that sweet spot again. A fusion of colourful sounds and rhythm. They had the crowd dancing for all their worth, arms in the air and mucho mucho mambo swaying.

It was great to see Felix and Harry alternate on the lead vocal duties. Their tones and styles complemented each other to perfection. As the vocals changed it just kept the very busy stage fresh. The smoke piling out of the machine catching the light rig brought in by the band. Bright white light beams danced across and dazzled the crowd. 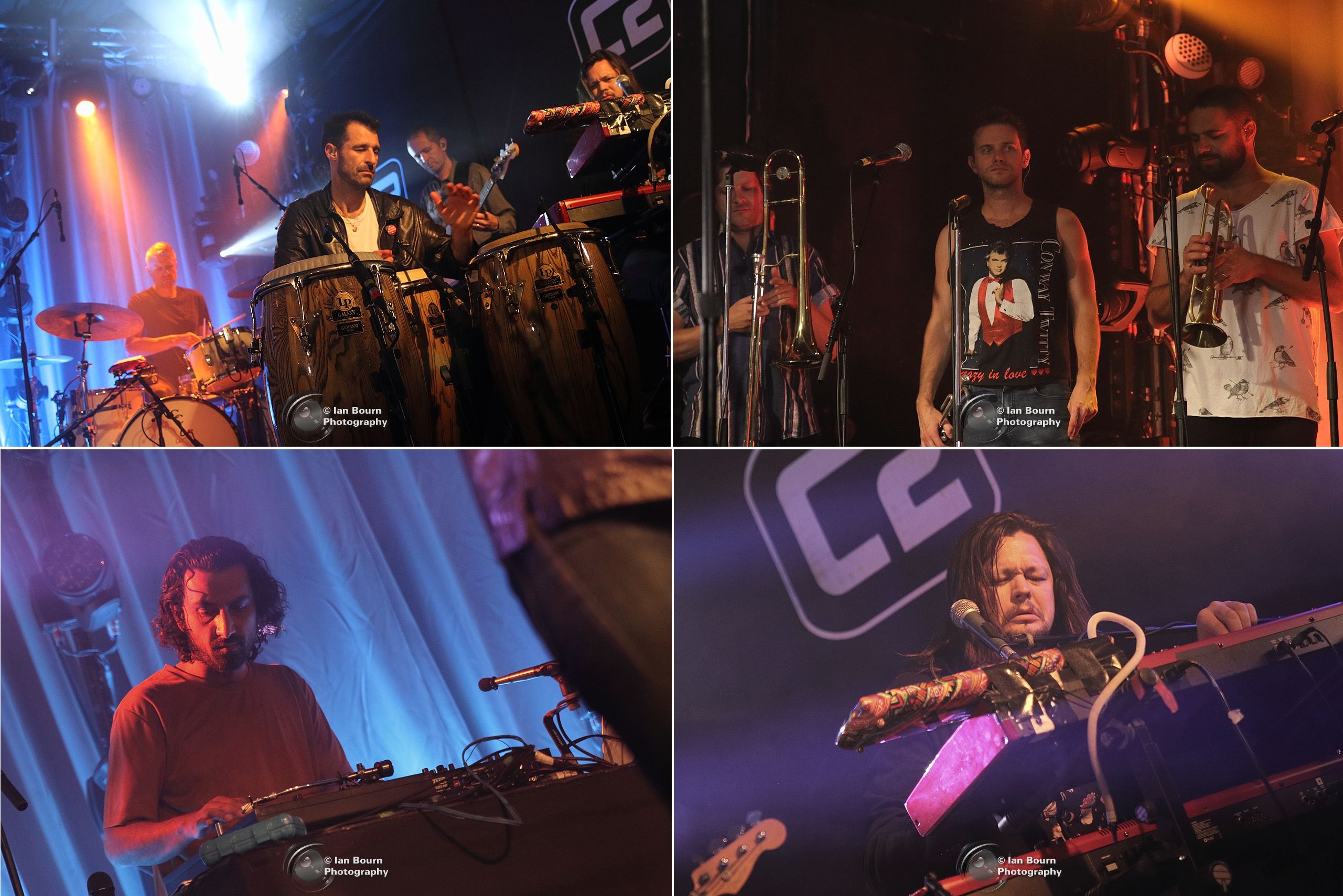 ‘Call Me Home’ was in the set, later than indicated on the setlist. This is a huge track from the 2010 album ‘Cinema’. Felix on vocals and just keys and drums. This was a powering track that lifted the crowd even higher and Jamshid hit the decks with some wheels of steel scratching which threw another twist to what we had experienced so far. You really could not tell what was coming next and the brass section fired up as if to prove that very point! The crowd joined in with the chants as the song built. The scratching seemed to have its own extended section. The crowd sing along spot was perfect. This was a standout song for me.

The frontman Felix just seemed to be constantly grinning, and the entire band seemed also to be having a blast of a time and what they were producing was bouncing into the crowd and those smiles were reflected back to the band.

Each member of Cat Empire had the opportunity to fire up and perform their own superb solos spot which the fans greeted with a cheer for each band member. Words really cannot do this band justice–you have to see them. Folk always ask for comparisons so I guess a touch of Ricky Martin and Gloria Estefan might take you to somewhere close. But, Cat Empire are more than that, so much more.

The Spanish sound of trumpet from Harry went down well. The sound tonight was awesome and ‘How To Explain’ lifted the party atmosphere higher!

The softer sound of a single ‘No Longer There’ started up and the tempo picks up slightly for this brilliant melodic number and all the while that beautiful brass supporting Felix on the vocals.

‘Daggers Drawn’ led us into ‘Brighter Than Gold’ as the set came to a close. ‘Brighter’ is a non-stop riot of sound, vocals, chants. The double bass was rolled out again for this one and Harry shared the vocals whilst clutching his trumpet. There is a super live video from Australia on Youtube which I recommend, but this one seemed to captivate the happy, sweating and dancing audience leading them on to a higher level of dancing and singing.

The guys left the stage for a minute and returned to a huge cheer–they put down ‘Bulls’. A slight reggae start for this one and then crescendos with stopping of brass and bass.

The set closed with reggae infused ‘Chariot’. Disc scratching was back and you can never have enough cowbell! And, that ladies and gentlemen is how you finish a show. Stunning.

The Cat Empire are a group of truly talented and gifted musicians and singers. They have combined to form a wonderful band. They give us their gift of music that is uplifting, joyous, thought provoking and full of heart. Thank you guys. 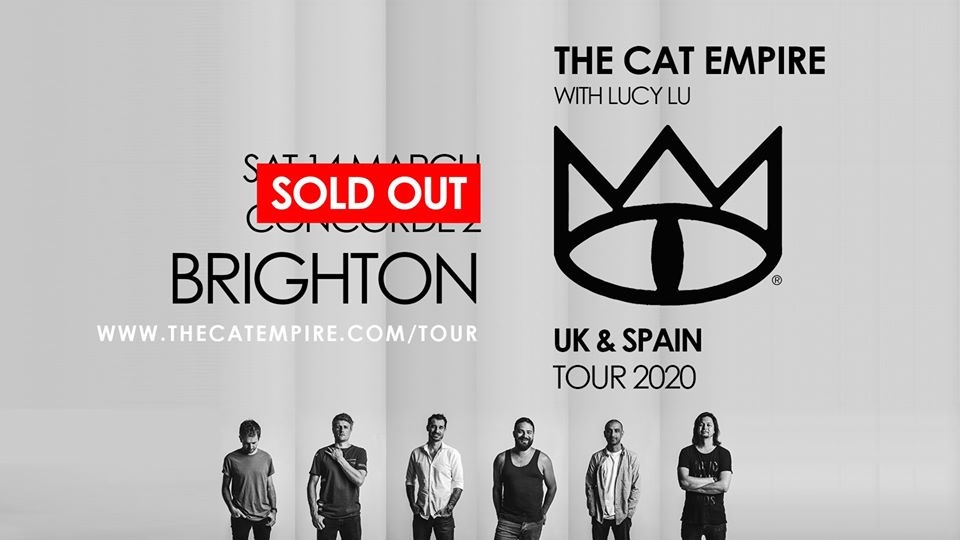 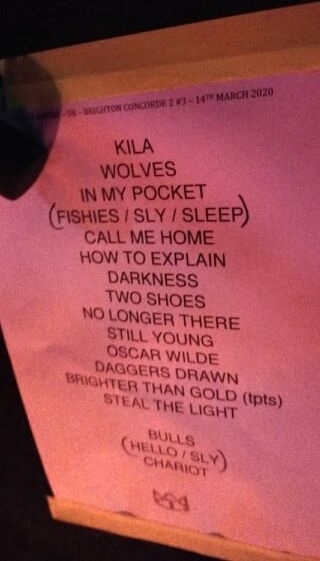