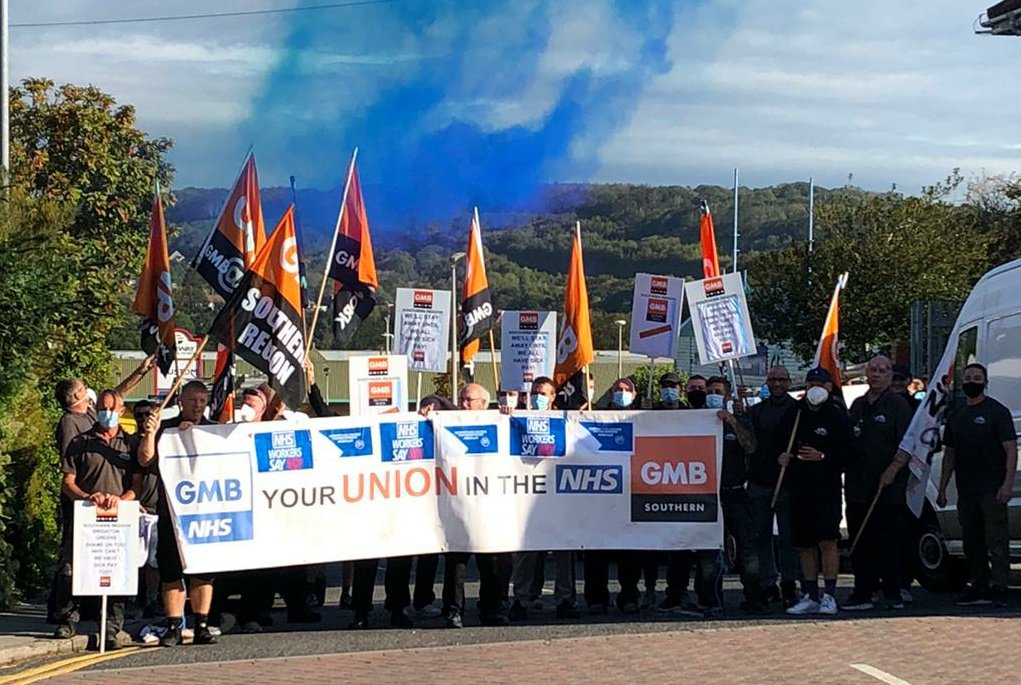 Housing repairs staff on the picket line this week. Picture from GMB

More walkouts have been announced in an ongoing dispute between the city council and members of its housing repairs team.

The strikers are currently on the fifth day of their first strike, and this morning announced another ten-day strike starting on Monday, September 28.

The GMB, which represents the strikers, says they will not go to back until all workers who have just transferred from Mears to the council are given full sick pay.

The issue has arisen because some staff were only eligible for statutory sick pay when they worked for the private contractor Mears.

When staff transferred to the council, they were offered standard council terms and conditions including full sick pay. Most – the council says 88% – were also given a pay rise to bring them in line with other council staff.

However, for a few transferring to council pay bands meant taking a pay cut. For these workers, the council said they had to decide between taking a pay cut but getting full sick pay, or remaining on their higher salary but having to also stick with only statutory sick pay.

Those striking include plumbers, electricians, carpenters and painter/decorators along with various other trades who make repairs to the council homes.

The dispute first arose in October, when GMB asked Mears for all staff to get full sick pay plus an 8% payrise. The dispute was inherited by the council when the service moved in-house in April.

The strike was announced soon after the Green party took control of the city council from Labour following the resignation of two councillors.

Mark Turner, GMB branch secretary said: “There is now a two week grace period, where service can return to normal. I suggest the council use this time to come to the table with their own realistic offer if they don’t like the GMB’s viable solution for sick pay fairness.

“The onus is on them now to do just that but it needs to not be based on enforcing a pay cut upon anyone looking to gain sick pay, as Mr Raw and his management team remain adamant would need to happen.

“We are now therefore at an impasse as our members remain clear – we’ll stay away until we all have sick pay.”

Gary Palmer GMB Regional Organiser said: “The response and solidarity from the public and other visitors to this week’s picket line has been fantastic: lots of enquiries about the issue and affirmation that our members actions are warranted and reasonable.

“Geoff Raw, his Exec team and many of the Housing Team management can feel secure that they are safely working from home, all enjoying good salaries and the benefits of full sick pay should illness strike.

“Our members meanwhile, who are providing emergency home repair cover and are placing themselves at risk on a daily basis, have no sick pay should they get ill.

“Our members don’t believe that to be right, and the GMB agree, so unfortunately this means the dispute will continue. We are sorry to say the residents may have to wait for much needed repairs to their homes as the dispute will almost certainly escalate until the council see sense and embrace fair pay and sick pay equality for all.”

A council spokesman said: “This dispute arose before the transfer of the repairs service in April, and relates to a claim from GMB for an 8% pay increase and standardisation of sick pay and annual leave.

“We’ve had numerous discussions with repairs staff and trade unions over the past two years to make sure the transfer of the service continues to be a positive one for staff and our council tenants and leaseholders, including many constructive discussions with the GMB in an effort to resolve this dispute

“We will not be making anyone take a reduction to their pay. We are offering all transferred staff the opportunity to switch from their current contracts to council terms and conditions, which includes full sick pay and annual leave entitlements.

“This would see the vast majority receiving significant pay increases, and ensures that transferred staff are paid fairly and equitably with other council staff.

“A few staff are currently paid above council rates of pay, and their pay will be protected if they choose to stay on their current terms.

“The council has a strong employer offer to reflect the value we place on our staff, and to fairly reward them for the demanding jobs they do serving the city.

“Our repairs staff will be eligible to receive the full benefits of the council’s offer, including support for wellbeing and family friendly policies.

“Transferred staff have been provided with the local government pension scheme and have been paid in full throughout the Covid-19 crisis, while the service has been limited to providing essential repairs.

“This has included Covid-19 special leave arrangements for those without sick pay under the current terms & conditions they have transferred to the council on.

“We are keen to continue discussions to resolve the dispute and progress with harmonisation as soon as possible. We feel the offer the council has made is fair, transparent and offers many benefits for colleagues who may want to transfer to council terms.

“It also means that all council staff are paid fairly and equally and we are not entering into an agreement that might create unfair pay for any one group of staff.

“If industrial action does take place, we will try to minimise any disruption and residents should report any repairs in the usual way.”