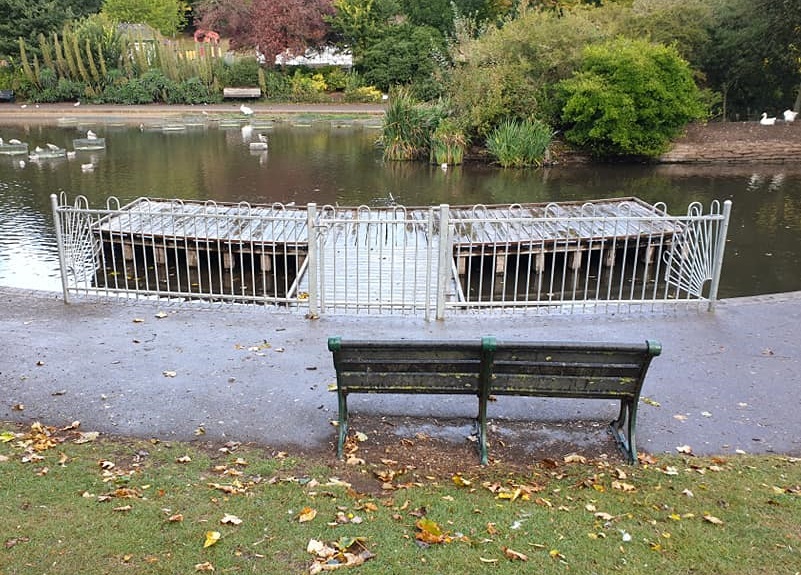 The city council has put up a permanent fence and gate to stop children walking by themselves onto a jetty over fears they could fall into the inches-deep water.

There are no barriers between the footpath and Queens Park pond, but the council has been putting up fences to stop people walking on the jetty since it was completed in March last year, as it said adjustments were needed to make it safe.

Over the last 18 months, the barriers have regularly been moved, and sometimes thrown in the pond, and thousands of people have safely used the jetty to watch the pondlife with no recorded accidents.

Resident Ken Frost, who has chronicled the developments around the platform which he has dubbed #jettygate, said: “The gate is an unnecessary cost for no benefits

“It is a metallic monstrous carbuncle out of keeping with the pleasing lines and form of the jetty.

It’s also easily circumnavigated, and the rest of pond has no fence so kids and idiots still can fall in.

“Why was this not in the original design if it’s so necessary?”

A council spokesperson said: “After advice from the Royal Society of Preventing Accidents (RSOPA), we have put in place a gated fence for continued access of the jetty in Queens Park by members of the public.

“There was previously a temporary fence put place to ensure safety, but as this was continually vandalised we have replaced this with a more permanent structure.

“We are pleased that we have had no reports of accidents in the last 18 months. As the health and safety of our residents is of prime importance to us, we are also putting in place an anti-slip surface for the winter so that the jetty continues to be safe.

The jetty was built by the Friends of Queen’s Park using money from local developers – but before it was completed, the Royal Society for the Prevention of Accidents made a surprise inspection and deemed it unsafe.

They raised concerns that there is not enough edging to stop buggies and wheelchairs rolling over the edge. This has now also been fixed.