The bosses of a fringe theatre on Brighton seafront pitched for a permanent drinks licence at a hearing before three councillors today (Monday 30 November).

Otherplace Productions told a council licensing panel that bar takings were vital if the venue was to survive.

But the police and council licensing officials told the panel that they were concerned about the prospect of permitting an arts venue to operate, in effect, as just another bar or pub.

Their concerns were greater because the venue, the Electric Arcade, below the zip wire, in Madeira Drive, was in the central Brighton area where drink-related crime and anti-social behaviour were a problem.

As a result, Brighton and Hove City Council had a policy of refusing new premises licences in the area – designated a “cumulative impact zone” (CIZ) – other than in exceptional circumstances.

Otherplace was granted a temporary licence in May for Daltons Bastion Downstairs, below the Brighton Zip.

The company, which also runs the Brighton Fringe venue the Warren, said: “During 2020 the premises has operated under a temporary licence and in what can only be described as a severely difficult operating environment.”

But, the company said: “An integral part of the revenue stream to support the clear cultural and social benefits of a premises of this type is the sale of alcohol.

“While it will always be positioned as a supplementary activity to the theatrical and cultural pursuits, it does allow the premises to offer affordable space for the small-scale freelance cultural ecosystem of the city.”

Even if the venue was granted a premises licence as a small theatre, the police and licensing officials were worried that it would be free to become a pub or bar in the future.

Otherplace said: “Due to the increased and diversified nature of the pedestrian traffic in the area, the local operators have reported an anecdotal reduction in anti-social behaviour and specifically drug use in the area.

“In addition to this, the increased security presence in the area has generated a number of welfare calls to the seafront services to alert lifeguards to members of the public in potential risk of danger in relation to the sea.

“Overall, the use of the premises has demonstrated itself to be of benefit to the local area and a clear positive impact as part of the CIZ.” 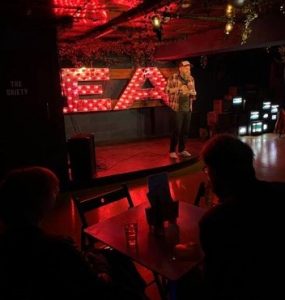 But Sussex Police licensing officer Hannah Staplehurst said that lockdown restrictions had not made much difference to crime levels in Madeira Drive.

In the Electric Arcade’s postcode area, she said, 12 crimes including knife crime and assaults were reported to police in September – and a further 10 in October – similar to 2019.

She said that the force was concerned about the increasing numbers of people in the area who may become victims of crime and wanted a full CCTV system to cover the venue.

Council licensing officer Sarah Cornell said: “Ultimately, I don’t want members of the public to go in at any time of day and treat it as a ‘vertical drinking establishment’.”

The temporary licence, she said, restricted the bar to within two hours of a show and to ticketholders only. But the Otherplace team said that this was too restrictive.

Ian Baird, for Otherplace, said: “We are not asking for a contravention of policy but asking for it to be upheld.

“Policy identifies the benefits of a diversity of venues, and the Electric Arcade fits within that exceptional circumstances.” 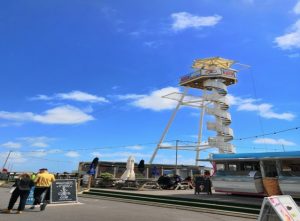 He said that the venue would be willing to accept conditions that would prevent the premises from becoming a night club or bar-style venue.

It was suggested that the venue could be required to host a set number of arts-led activities a week, with a debate about the appropriate number of events.

Otherplace design and production manager Joshua Carr said that during busy periods, such as the Brighton Fringe, summer holidays and Christmas, the venue could host up to 40 shows a week.

But there were quieter months too, such as January and June, so a flexible would be more viable.

Labour councillor Jackie O’Quinn, who chaired the “virtual” meeting of the licensing panel, signalled a desire to find a compromise.

Councillor O’Quinn said: “We support your enterprise but it is our job to make sure we have conditions … that would make it a positive influence in the area rather than a negative one.

“Hopefully, we’ve had a thorough discussion … and obviously if there are problems, the police will pick up on this very quickly.”

The panel retired to consider its decision which is due to be made public within five working days.