Youths attack boy and steal his bike in Hove park 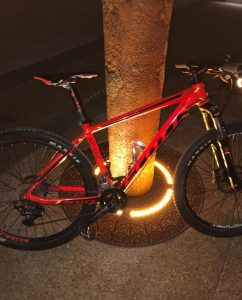 A gang of youths attacked a boy in Hove Park and stole his bike.

The force said: “Police are appealing for witnesses after a boy had his bike stolen during a robbery in Hove.

“At around 4.30pm on Wednesday 7 April, the 16-year-old victim was walking in Hove Park with three other friends when they were approached by a group of around seven people.

“The victim was punched and pulled off his bike, which was then stolen.

“The bike (pictured above) is an orange and black Scott Scale mountain bike.

“The suspects are described as males between 16 to 18 years old, wearing dark clothing and hooded jumpers.

“Anyone who witnessed the robbery, saw any suspicious behaviour in the area around that time or who may have seen the stolen bike is asked to get in touch.