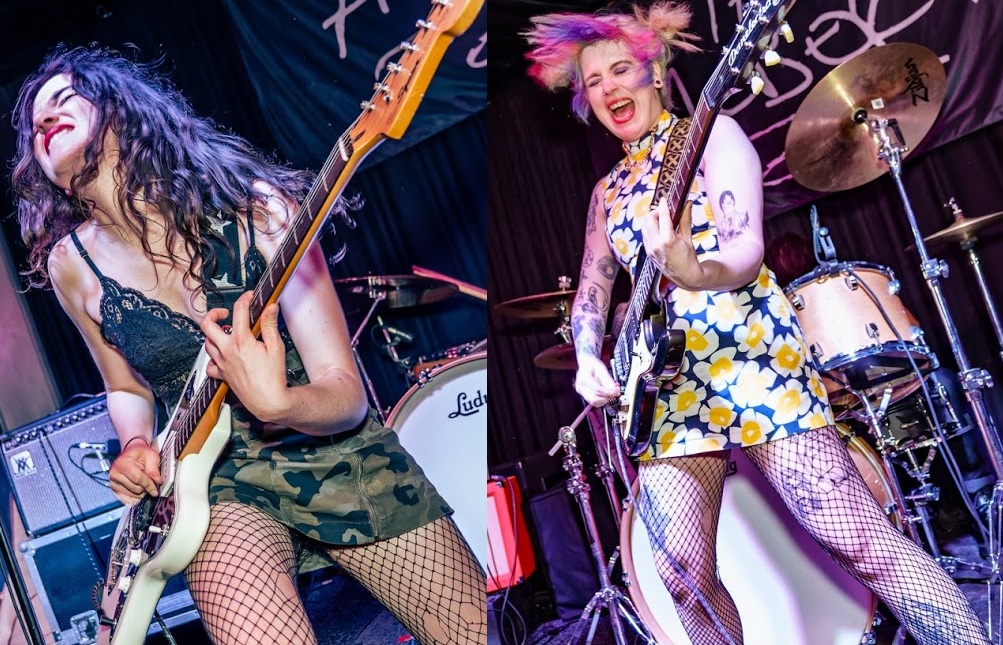 Weekend Recovery and A VOID hit The Prince Albert in Brighton for a co-headline tour. The third in a four-date sold-out jaunt across the country, previously playing Leeds and Sheffield and finishing tomorrow at Our Black Heart in Camden Town.

Each date is a fully seated, socially distanced affair taking in all current government guidelines, which means for the gig-goers, no more than 6 to a table and table service. I must say The Prince Albert staff do a fine and courteous job in carrying this out.

The last time I caught these bands live was on the 7th December 2019, where they both performed as part of a Camden Rocks all-dayer at the sadly missed Monarch in Camden Town. Both bands put on excellent shows that day, and I can only hope for something close to that experience this evening. 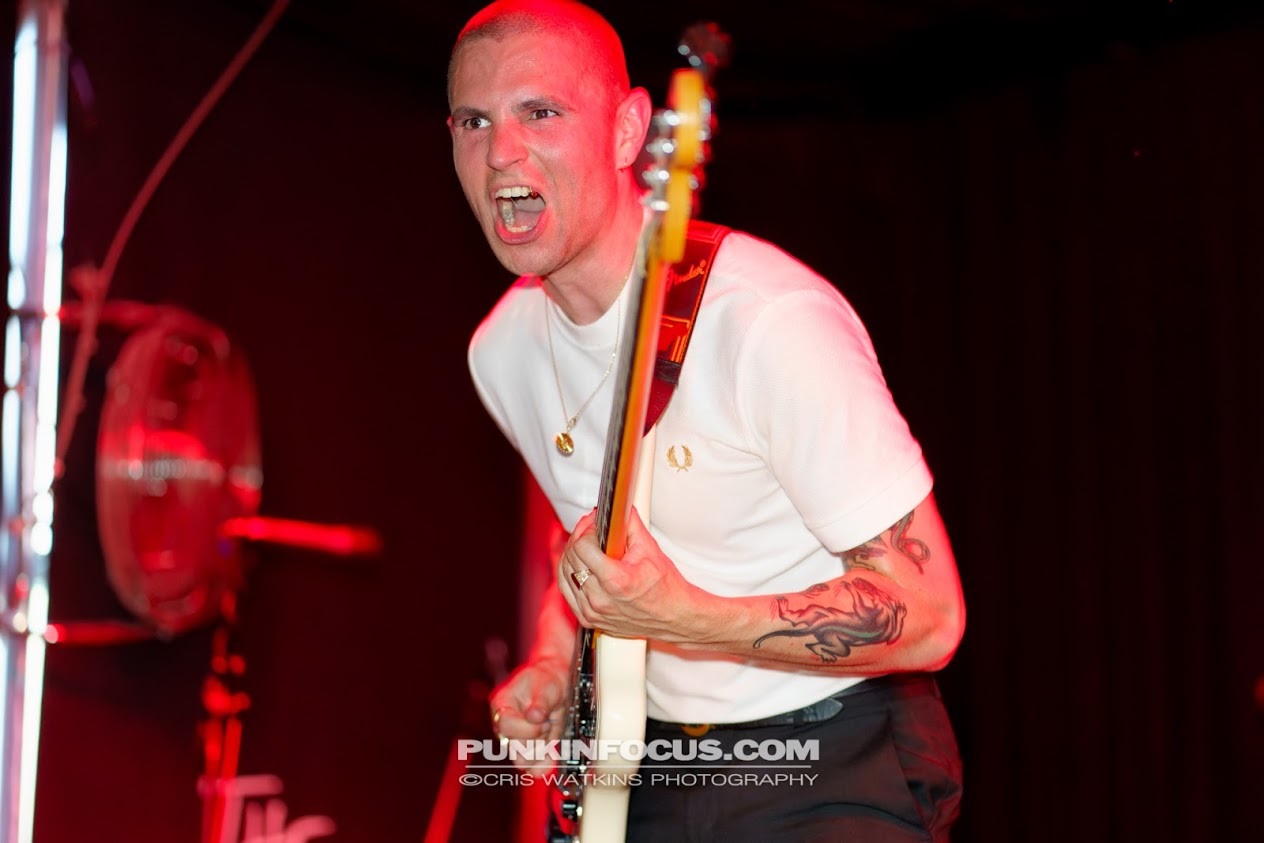 South Coast duo SNAYX (pronounced ‘Snakes’) are the local addition to the bill and get the envious task of warming up the thirty live music starved punters seated before the Albert stage.

Rarely do I see a band where I feel the hairs rise on the back of my neck. Still, as soon as SNAYX, Ollie Horner (bass and backing vocals) drops those first almighty crushing riffs on the bass whilst manically staring into the crowd, I know I can feel I’m witnessing something a little special here tonight. Joined by frontman and guitarist Charlie Herridge and helping in the backbeat department, session player Josh Caplin their sound truly comes together. 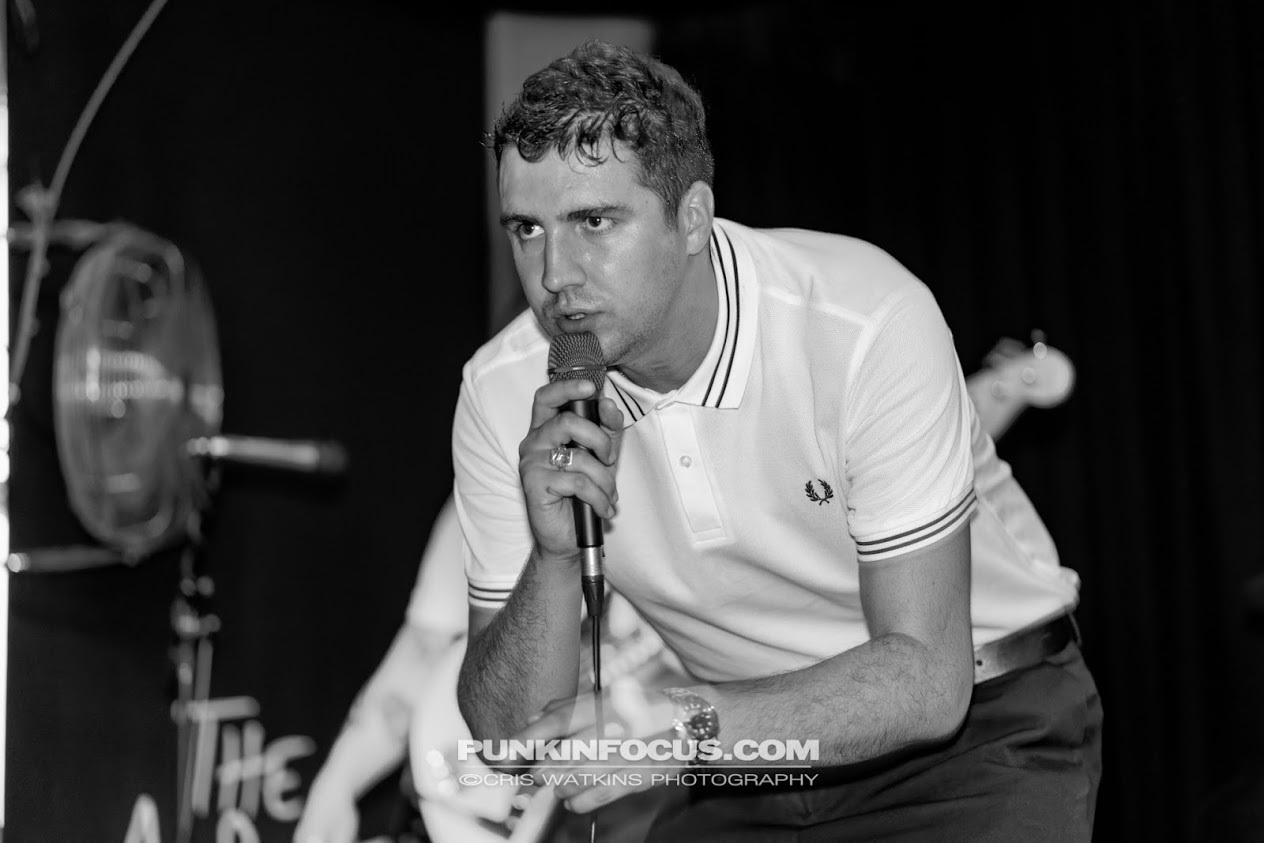 SNAYX mix post-punk and grime punk into one delicious killer cocktail. They’re out and out bruisers with every song a gut punch. They whip through ten songs and get more impressive with every track climaxing with a banging cover of Slowthai’s ‘Doorman’, but for me tonight, it was the trio of ‘BUCK’, ‘WORK’ and ‘FAYX’ that lit the fire in the belly of the beast.

SNAYX are one more good reason why I always check out the support act. No wonder they’ve already been picked to support the likes of Kid Kapichi, (read our review HERE) D-Boy and the Nova Twins, and with a hectic year of dates ahead, these guys are only on the rise. Don’t be surprised to see this duo headlining very soon. Brighton’s punk rock scene is in an excellent state at the moment, and they join the ranks of DITZ, Gender Roles, Wife Swap U.S.A. and Monakis, putting the town firmly on the punk rock map. 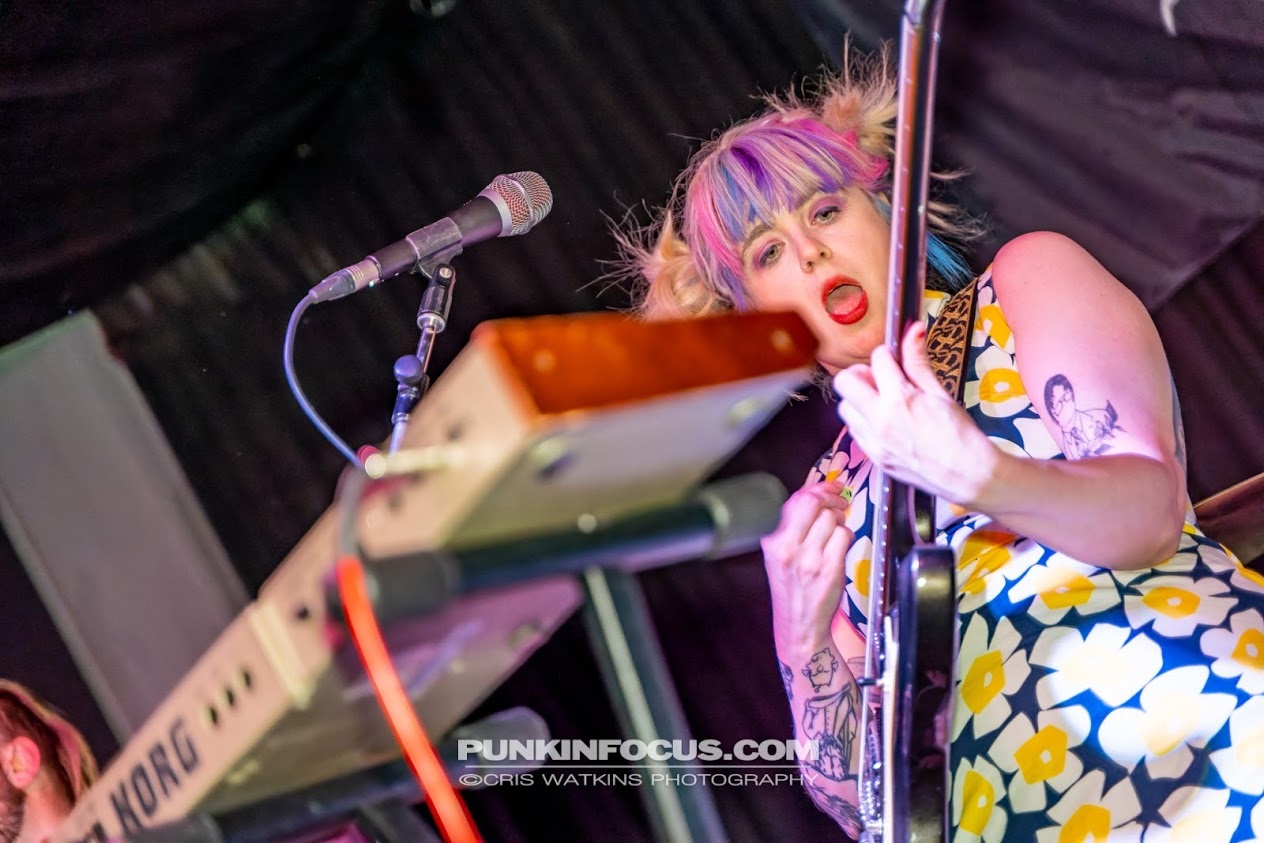 Weekend Recovery, who hail from Leeds, cite themselves as a garage grunge band. Still, I’ve felt they’re more in the rock vein, being more Pretty Reckless meets Blondie than Nirvana and evident on their albums, both their debut ‘Get What You Came For’ and the recent ‘False Company’.

Tonight they are first to go on; this being a co-headline show, I don’t know if they mix up the running order on the other dates of the tour or if this is set. 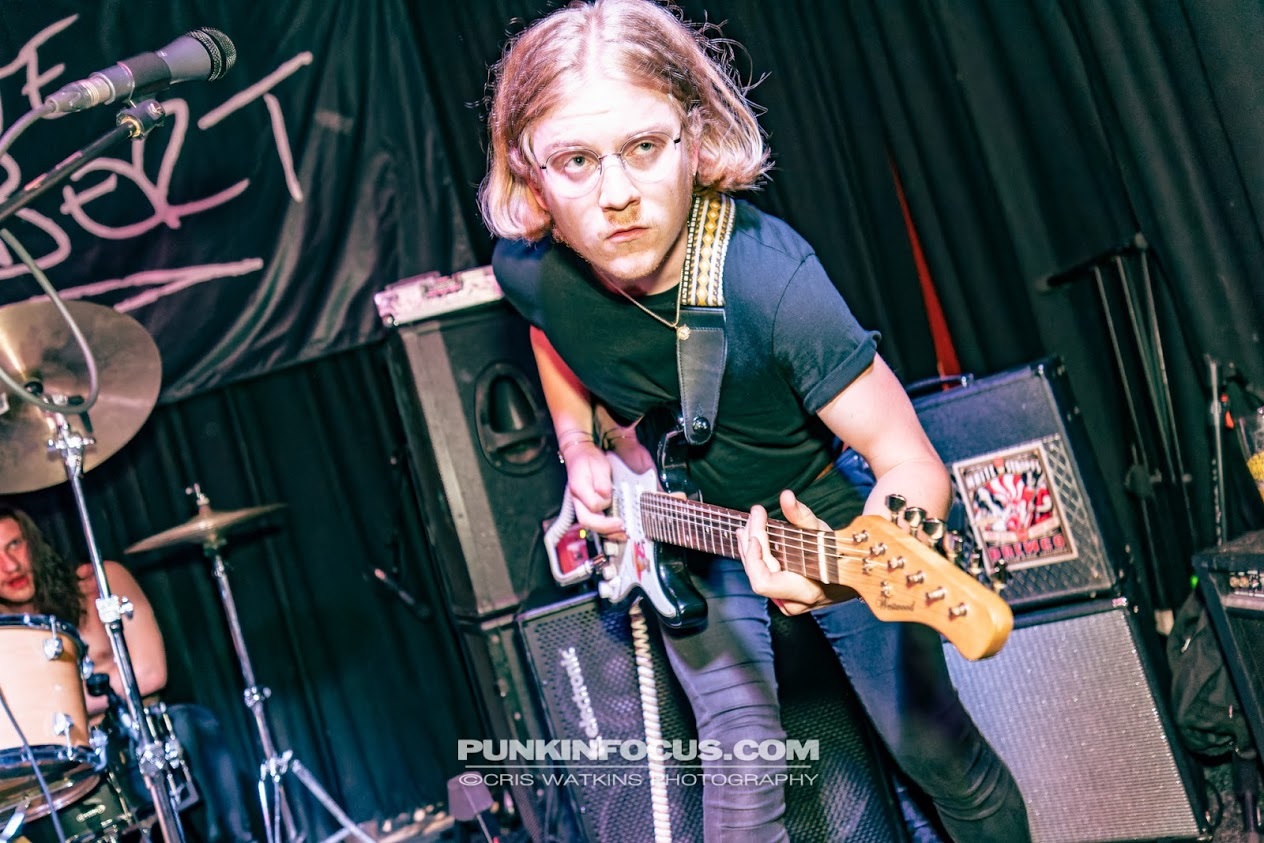 Weekend Recovery flew out the gate with the superb ‘Radiator’ with its killer riff from lead guitarist Ellis and chugging rhythm and keeping things tight as a nut at the back, Jack on bass and Isaac on drums. Lori’s vocals certainly are on form tonight, effortlessly going from the melodic high’s of the beautiful ‘Surprise’ and ‘It Doesn’t Seem Right’. The Blondie-Esque trappings of ‘Going Nowhere’ with its pure garage riff and a good dose of na na na’s and kicking it with the best of them on ‘I Can’t Let Go’. 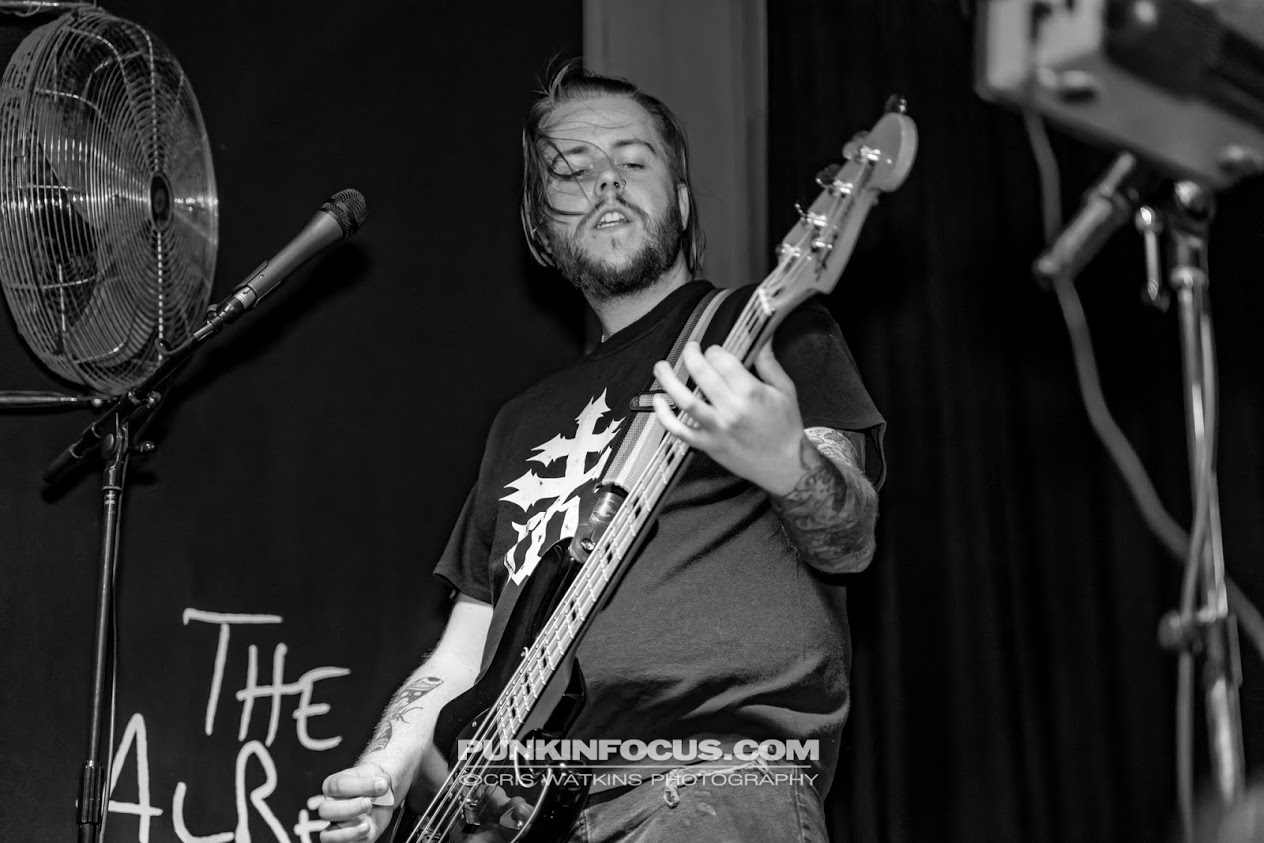 The eleven-song set goes by way too fast but ends with a powerful rendition of ‘Zealot’.
Weekend Recovery are damn fine on record, but they bring out their best in a live setting, and the assembled crowd were sure to let them know just how good it felt to be a part of this event, greeting every song with a well-deserved cheer.

This August, they’ll be on the road again with SNAYX with an unmissable date at the Hope and Anchor in London. 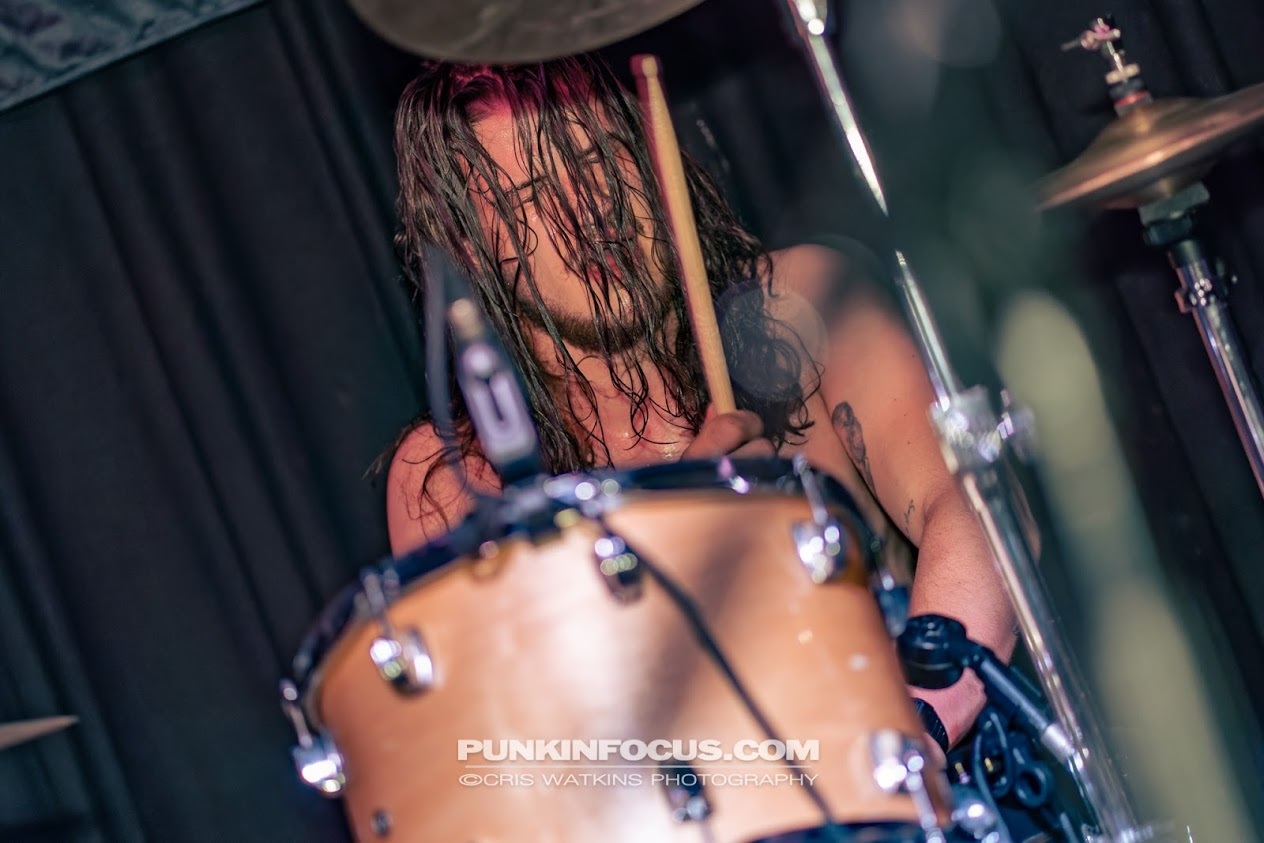 We get another short 20 minutes or so break to order more drinks, empty bladders and fill our lungs before it’s time for the final band of an already excellent evening. 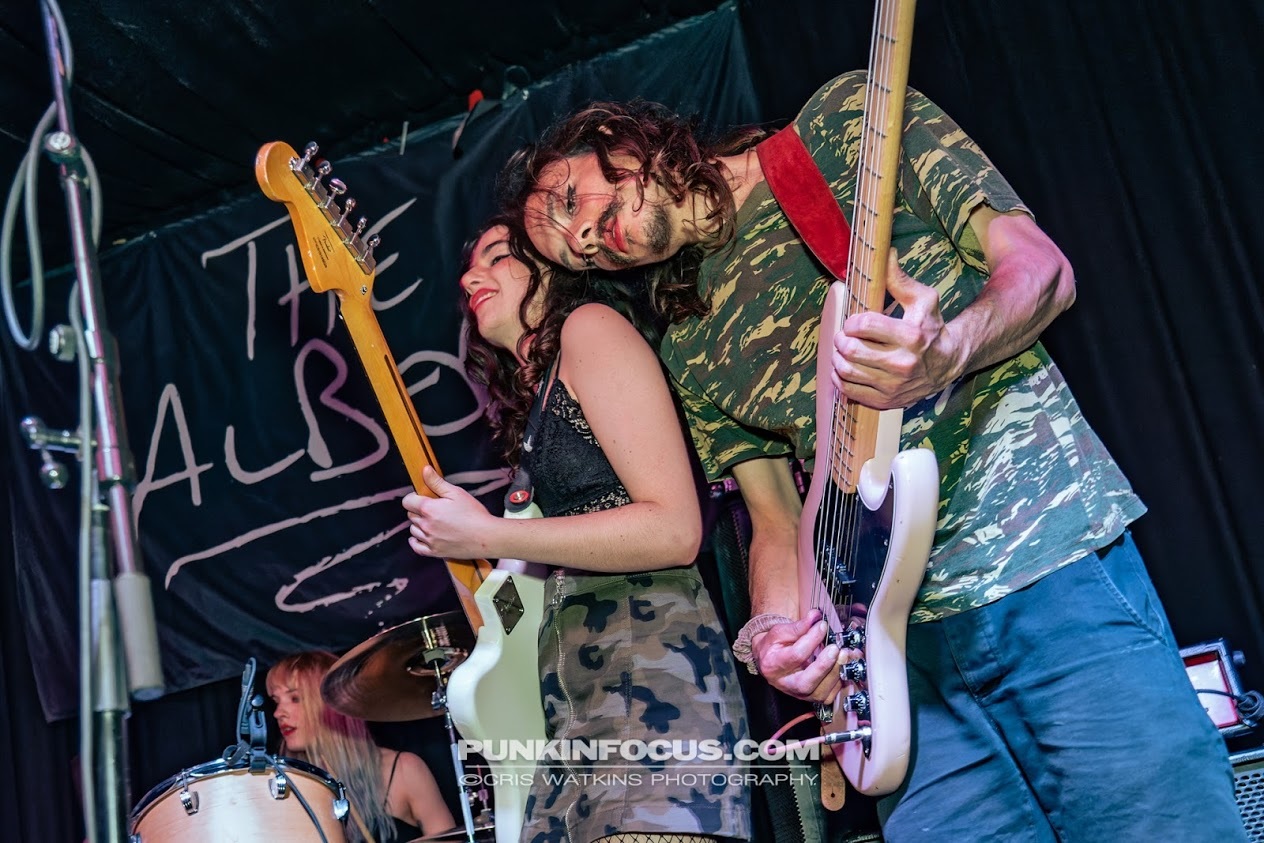 A VOID are a three-piece hailing from Paris via London who’ve been wowing crowds for over four years with their wild and unpredictable shows.

A VOID has been singer Camille Alexander’s baby since she was 17, but evolved into the current lineup when Camille and new drummer Marie Niemiec moved from Paris to that rock ‘n’ roll haven, London. It’s where they met the bassist Aaron Hartmann (apparently on a bench), and this new journey began. Check out their debut, 2018 released ‘Awkward And Devastated’. 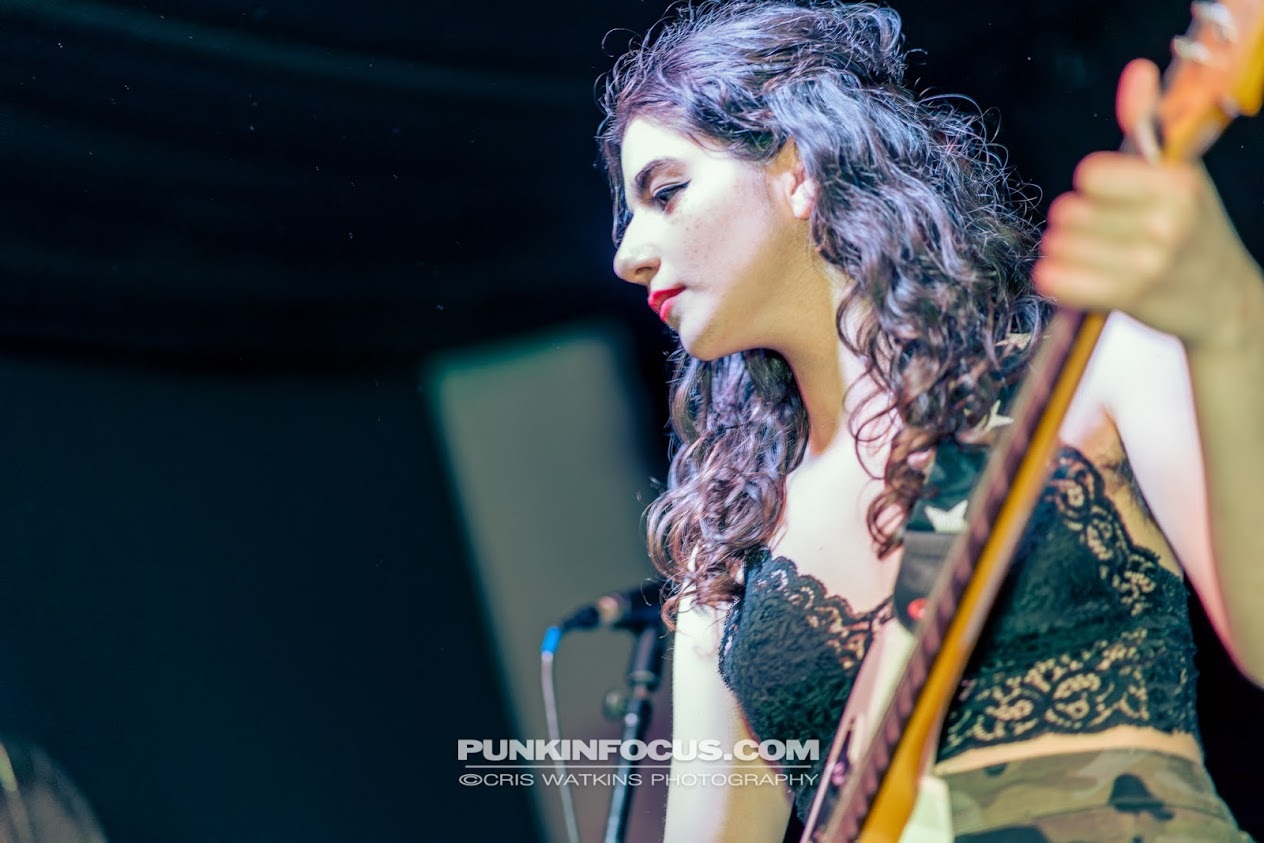 Camille’s voice can be hauntingly beautiful, like on the opener ‘A Rose’, a slow-building track with roots in grunge, but with a minimalist feel. Broad open spaces in the guitar work with an even solid tempo set by the bass and drums. ‘Sad Events Reoccur Pt.1 & Pt.2’ highlights the style even further. ‘Canker’ catches the ear with a solid bassline from Aaron and drop dead beats from drummer Marie, with soft discordant melodies to spit in your face violent sonic outbursts. It really is a blast.

This style prevails throughout the set, this stripped-down minimalistic approach, but with incredible and sometimes jarring outbursts of frenzy pushing it firmly into the punk rock territory. Still, these are no three-minute blasts but intricately woven soundscapes. They certainly know how to create a feeling of tension and mystery in their music. 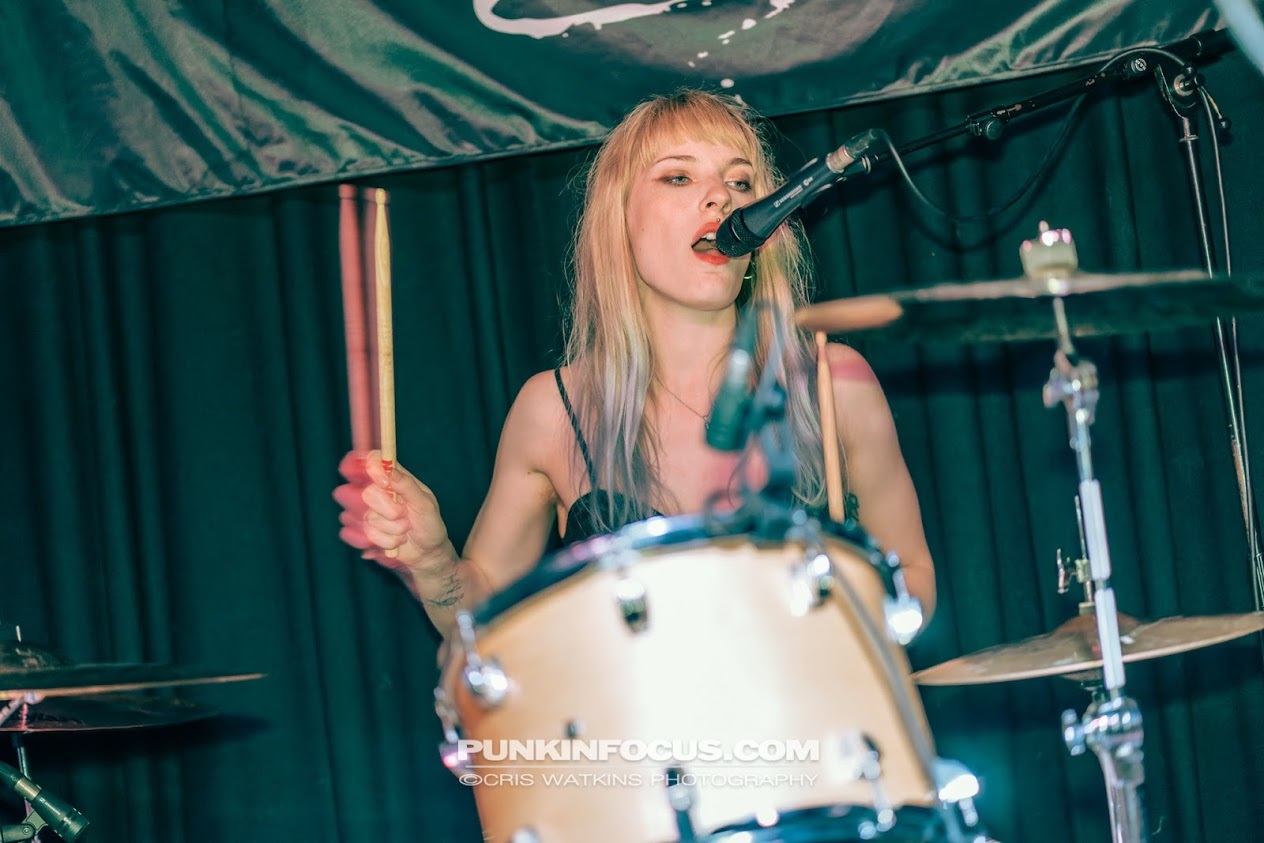 Apart from an issue with the guitar staying in tune, the band were on top form tonight. The standout and highlight of the night for me was the sublime ‘Éclatée’ and probably the strongest of their set.

A VOID closes the set with ‘Jeopardy’, from the ‘Roses As Insides EP’ with Camille at her screamingly best while she throws herself around the stage, into the crowd and even sprawled on the tables still with mic and guitar in hand. 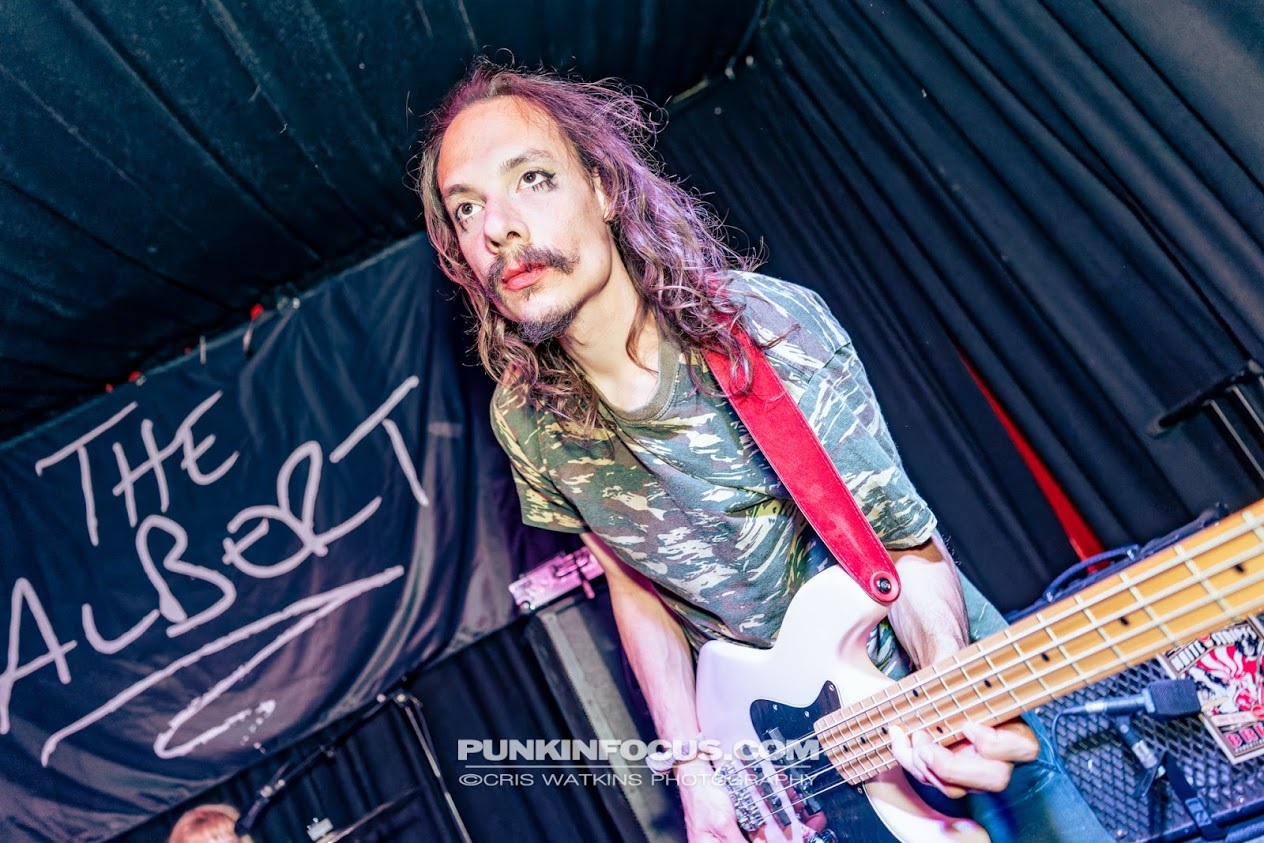 Tonight, the band are sometimes loose, even shambolic, but every song delivered with an undeniable charm. In tune or out, what comes across is the energy of the performance. Camille is an entertaining erratic persona the bassist, Aaron is so zoned in on the beat he looks like he could do this in his sleep and Marie’s drumming is as intense as it is interesting.

Part grunge with nods to the Pixies, Smashing Pumpkins event hints of prog and art-rock all reinvigorated for the youth of today. They’re a band that charms you and leads you into their world, sometimes an incoherent and disorganised mess but a fun riot of a band that I could see again and again without getting bored of the antics. 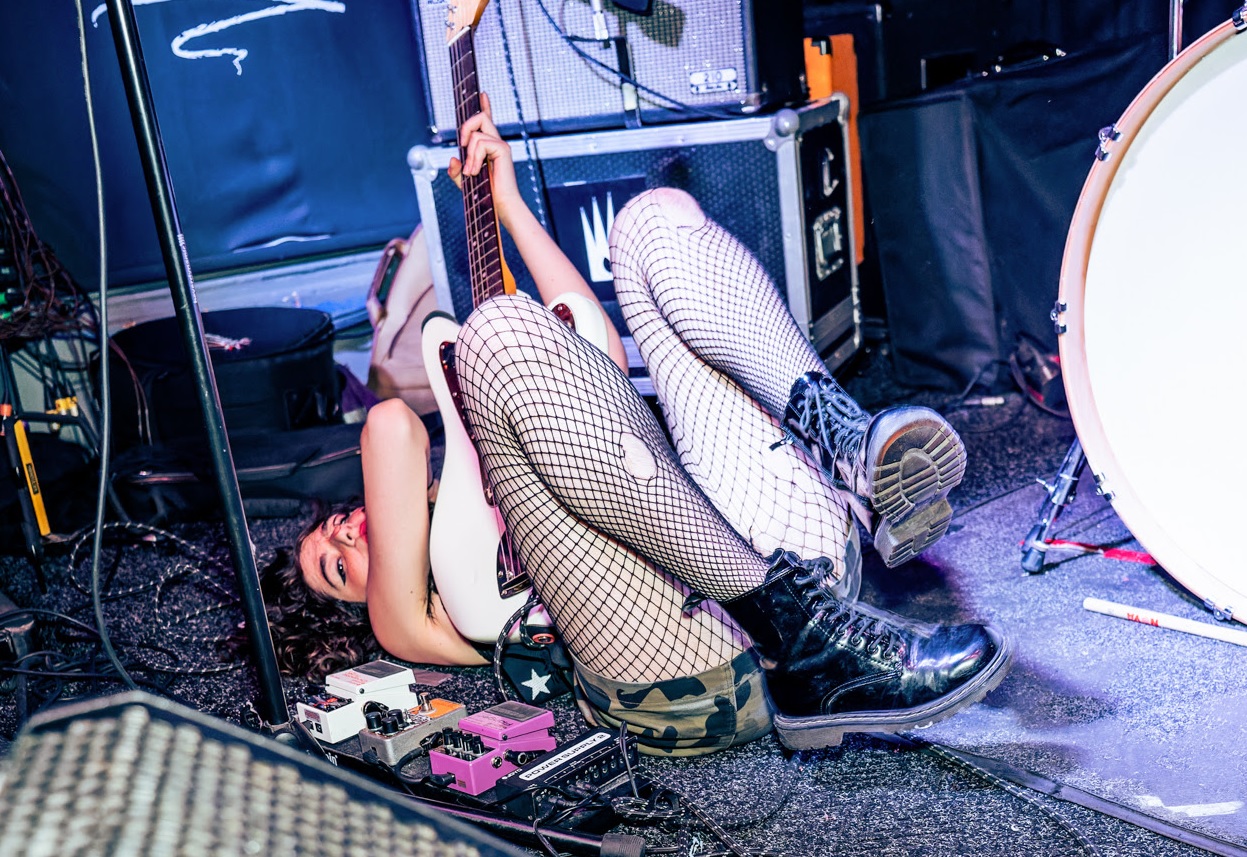 What a night it has been at The Prince Albert. So good to catch up with a few old friends, let’s do this again real soon, without the social distancing, it’ll be a very messy night! 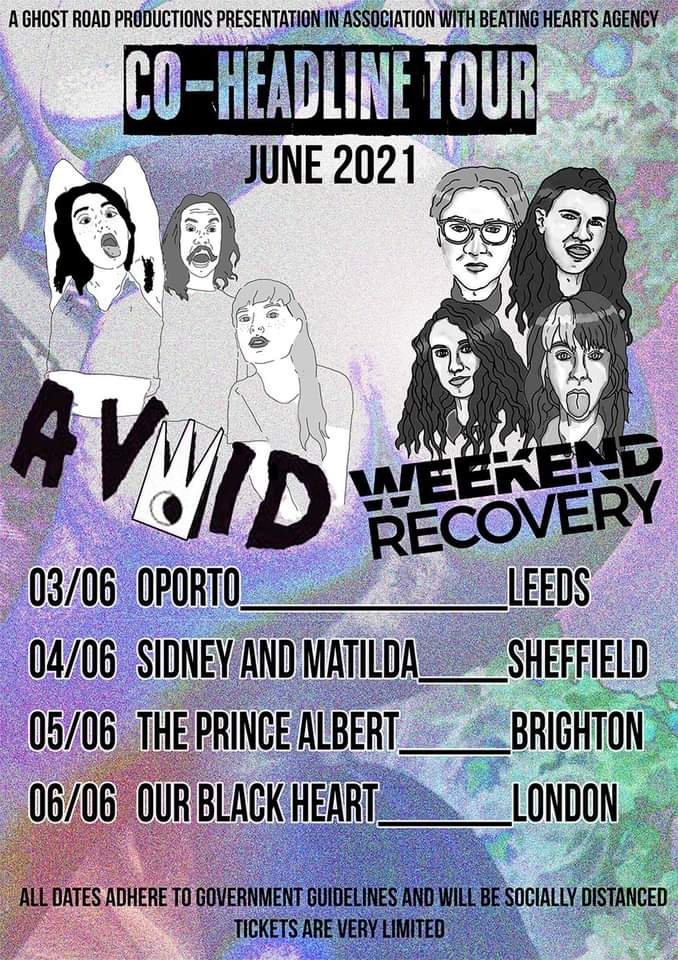