Plaudits for £300k upgrade to path linking Falmer and Woodingdean

A six-month £300,000 project to upgrade a path between Falmer and Woodingdean has been completed, to plaudits from across the political spectrum.

The old limestone path, created eight years ago, has been resurfaced and widened to make it easier for pedestrians, cyclists and even horse riders to use.

Woodingdean ward councillors Steve Bell and Dee Simson welcomed completion of the mile-and-a-half stretch of path, with the Amex football stadium and the universities at the Falmer end.

Councillor Simson said: “The original limestone path, which was an initiative of the past Conservative administration in the city, has proved highly popular with walkers, cyclists and commuters since it was installed in 2013.

“This widening and resurfacing project has now opened up more possibilities for local residents, with the path being more accessible for those with a disability.

“The work also opens up the possibility of creating an integrated network for Woodingdean. The simple addition of a pedestrian crossing across Falmer Road would link the Falmer Road path with the Drove Road path and create a safe network for active travel.

“As local councillors, this is what we will be pushing for.”

The two councils will maintain the path and it is expected to be adopted as a right of way or bridleway.

He said: “This project should be held up as a shining example of an active travel project that has popular support and will benefit communities.

“The path, installed in 2013, has been tried and tested and well-used by the community over many years.

“It directly links two parts of the east of the city – Woodingdean and Falmer – with a direct, off-road connection.

“This investment of £300,000 to enhance the path is money well spent and will benefit Woodingdean and its families for years to come.” 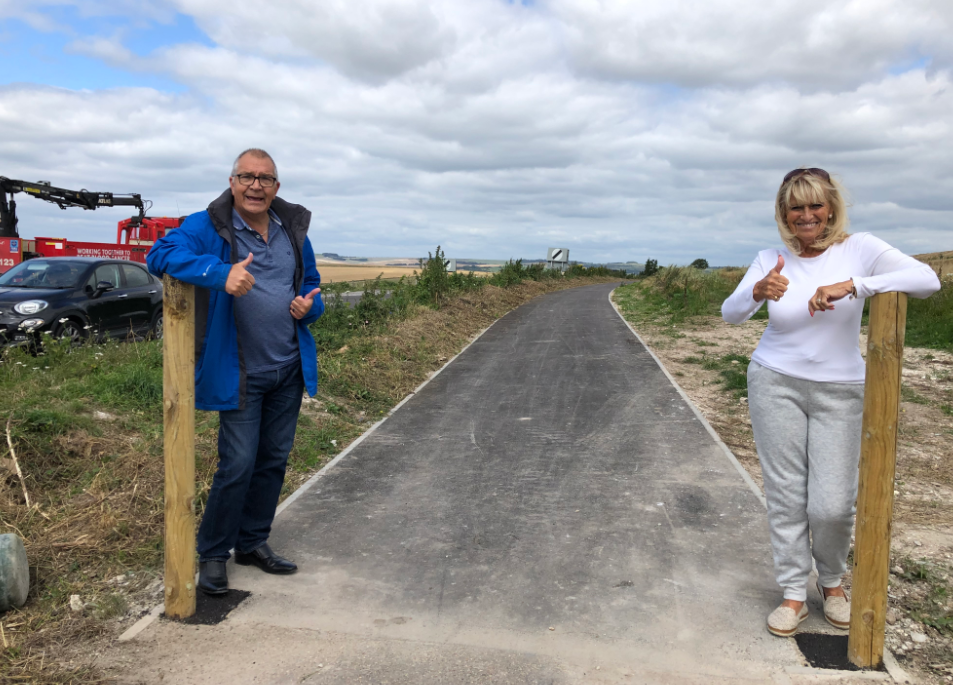 “On the doorstep of the South Downs National Park, the 2.5km path has been a popular route for walkers, cyclists and commuters since it was installed alongside Falmer Road in 2013 with the help of funding from the Department for Transport.

“It provides a traffic-free link from Woodingdean to the universities of Brighton and Sussex and the American Express Community Stadium and, in 2018, was being used by more than 500 cyclists a week as well as pedestrians and thousands of fans on match days.”

Green councillor Martin Osborne, who represents the council on the South Downs National Park Authority, said: “The path looks fantastic and I’d like to thank everyone who has worked so hard on the project.

“It’s a great traffic-free link between Woodingdean and Falmer and I know will be well used by people getting to and from the University of Sussex, work or just people out for a walk or bike ride.”

Councillor Claire Dowling, lead member for transport and the environment at East Sussex County Council, said: “We are delighted to have been able to work with our colleagues at Brighton and Hove City Council and the South Downs National Park Authority to improve this link between Falmer and Woodingdean.

“We hope this will help to encourage people to choose a more environmentally friendly and healthier way to travel for work and education, or simply enjoy this safe route to walk or cycle in the national park.”

Allison Thorpe, who leads on access and recreation in the national park, said: “The new surface is the best solution for this well-used route, making it easier for people to get into the South Downs from Brighton or from Falmer station.

“We know people will enjoy using this route, soaking up the views and connecting with the amazing landscape and biodiversity of the national park.”