A flasher with a dog has been prowling a Brighton park and police have published a picture in the hope of identifying the man. 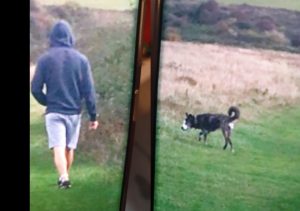 Sussex Police said this afternoon (Friday 1 October): “Police are investigating a number of instances of indecent exposure around the Sheepcote Valley area of Brighton.

“Several women have reported being approached by a man walking his dog who then exposed himself to them.

“The most recent incident took place at around 1.30pm on Saturday (25 September).

“A local woman reported being approached by a white man in his thirties who was around 6ft tall, with brown hair, blue eyes and of a normal build.

“He was also walking an old grey and black dog that looked like a German shepherd boxer cross.

“Police would like to speak to the man, pictured here alongside his dog, in connection with the offences.

“Anybody with information, or any victims who wish to report similar crimes, can contact police online or by calling 101, quoting serial 1450 of 25/09.”