Weeds are putting people off “active travel” by deterring them from walking, a councillor has warned. 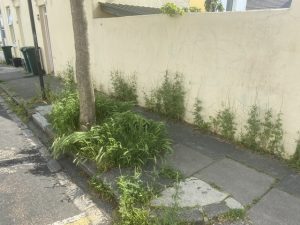 Conservative councillor Robert Nemeth took aim at the Green Party’s push to encourage people to ditch their cars and switch to walking and cycling instead.

He said: “Allowing weeds to take hold discourages active travel, raises the chance of injury to members of various vulnerable groups, increases costs for maintenance and compensation claims and fosters a sense of neglect in the public realm.”

It is not the first time that Councillor Nemeth has criticised the “rewilding” of Brighton and Hove’s streets.

And like most Green and Labour councillors, he was keen for Brighton and Hove City Council to find alternatives to glyphosate, the weedkiller or herbicide known commercially as Roundup.

The chemical weedkiller has been linked with cancer and has been the subject of compensation payments in America after a series of high-profile court cases brought against the maker Monsanto.

But on Thursday (21 October) Councillor Nemeth plans to seek an urgent report on “how pavements in the city can be rapidly brought to a high standard without excessive use of glyphosate”.

The council’s Environment, Transport and Sustainability Committee agreed to end the use of glyphosate almost two years ago.

It also agreed that “the removal of weeds in parks and on hard surfaces will be undertaken manually as an alternative approach to using pesticides”.

Councillor Nemeth said: “I’m a beekeeper. I’m passionate about the environment. I don’t want excessive use of glyphosate herbicides.”

But he said that he wants action because overgrown pavements have left some of the most vulnerable people in Brighton and Hove at risk of injury from slipping and tripping.

He said: “Having raised the issue of weeds over the summer which resulted in national coverage of the embarrassing situation, the Conservative group is now calling for an end to the current unsustainable policy position.

“Trips, costs and a run-down environment must be factored in rather than continuing the dogged pursuit of an ideological dream.”

Councillor Nemeth plans to speak about his motion at a meeting of the full council on Thursday at Brighton Town Hall.

The meeting is due to start at 4.30pm and is scheduled to be webcast on the council’s website.