Police dog tracks down suspect hiding in a field

A police dog helped to track down a suspect seen running from police across fields in Peacehaven. 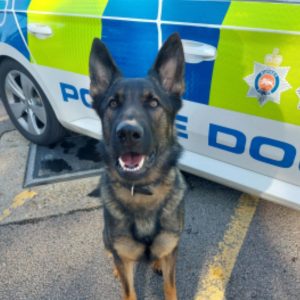 Officers were called to Pelham Rise at 8.40pm on Monday 11 October after a man was seen bleeding.

When officers arrived, they were unsure of the exact route taken by the suspect, but a flicker of light had been seen in a field earlier.

So Police Dog Hox, a two-year-old German shepherd, handled by PC Gareth Evers, was deployed to help track down the suspect.

PC Evers said: “I was well briefed by the officers on scene and, although the exact route taken by the suspects was unknown, a flicker of light was seen about 200 metres into the field where it was believed the suspect had lit a cigarette among bushes.

“I kept Police Dog Hox deployed on a lead because the search area was far too great and progress through a ploughed field was slow.

“Hox began to track naturally and took me through to a small clearing in the bushes, over a barbed wire fence and into a neighbouring field.

“He then indicated to me where the suspect was. It was pitch black but we found a suspect sitting in high grass.”

He appeared at Brighton Magistrates’ Court on Wednesday 13 October and was has been remanded on conditional bail to appear before the court again on Tuesday 7 December.