Rubbish and recycling crews were working round the clock to clear the backlog from the bin strike, Brighton and Hove City Council said.

The council said that crews at Cityclean, the rubbish and recycling service, were working day and night after the strike was officially ended last Wednesday (20 October).

The council said: “All our crews are out daily to remove the piles of waste that accumulated during the strike.”

Staff have also been out from midnight on Friday to clear up as much as possible from hard to reach areas that they can’t reach easily during the day.

The council added: “We also have additional crews removing the waste that’s piled up around communal bins while the usual day to day service is up and running again.

“It’s all part of the non-stop drive to get the city back to normal now the industrial action has been lifted.

“However, the scale of the operation is a massive one. The very large piles of waste that have built up around our communal bins and recycling ‘bring sites’ take about one hour to clear.

“With around 680 communal refuse bins, 1,500 communal recycling bins and 150 glass communal bins across the city, plus more than 60 recycling points offering recycling and glass collections, the clear up will take time.

“We believe there is a two-week backlog which means it will take a minimum of two weeks to remove.”

Despite that, the council said, the crews picked up almost 500 tonnes more than usual in just four days last week – from Monday to Thursday. 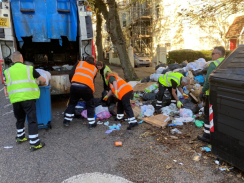 Although crews working last Monday, Tuesday and Wednesday, it was only after the industrial action officially ended on Wednesday that the clear up operations was properly able to begin.

The council said: “We fully realise how frustrating it is to see our beautiful city with so much rubbish on the streets and we want to thank all of our residents and businesses for their patience and understanding during these times.

“We promise to have the city, and the Cityclean service, back to normal as soon as possible.”