The problem with weed-infested pavements is “miles worse than we thought”, according to a Conservative councillor.

Garry Peltzer Dunn has spoken out after asking a series of questions about pavements at the Brighton and Hove City Council meeting last week.

Councillor Peltzer Dunn said: “The problem is miles worse than we thought. The council does not have a workable plan for keeping pavements in the city safe.”

His questions came as complaints grow about the challenges posed for pedestrians by uneven pavements, overgrown with weeds since the council stopped using chemical weedkiller.

“On top of this, we have 160 street staff who clean the streets including detritus, leaves and weeds. Contractors also support the process.”

She said that the council was responsible for maintaining 975km or just over 600 miles of pavement but had weeded only 20 to 30 per cent – leaving about 450 miles untended.

Councillor Peltzer Dunn said: “Pesticide use was banned in Brighton and Hove by the then Labour administration in November 2019 without a workable alternative plan to clear pavements of weeds manually.

“With statistics showing only six council workers are responsible for clearing the 975km of pavements, the council is struggling to cope.

“Claims against the council are running at record levels, with 31 claims being lodged in the year to date by residents who have been injured.”

It said that no payments had been made as a result of upheld claims in the past 12 months although 37 claims remained to be resolved, with money set aside if necessary.

Councillor Peltzer Dunn, who represents Wish ward in Hove, said that he was astounded by the response from the Green administration, adding: “They have failed totally to address this major problem. 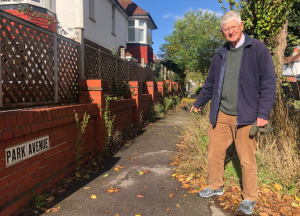 “Bearing in mind there are over 975km of pavements in the city and, taking the midpoint that 25 per cent have been cleared, this leaves about 740km in an unattended condition.

“This equates to a pavement in a dangerous weed-covered condition which would run from Brighton and Hove to Edinburgh. Some Green achievement!

“The Green Party administration appears to feel that their response to this year’s problem was adequate, ie, to employ six additional seasonal staff to manually clear the weeds.

“They now have stated that they will be obtaining new equipment and changing the method of clearing the weeds and this is of course welcomed if in fact it will eradicate the problem.

“It is vital for the administration to fully understand and accept that there is a duty of care to residents and visitors alike in the city.

“For every claim made for injuries caused by the state of the pavements, there are many more such accidents which go unreported yet are still painful and disturbing for many people particularly the elderly and visually impaired.”

The council said: “Many different types of machinery were trialled including different processes for weed removal.”

Officials were carrying out “benchmarking” with other councils to try to identify solutions, including new types of machinery – and “engagement with councillors and community clean-up groups continues”.

Councillor Peltzer Dunn also asked: “What changes are planned for next year to avoid this year’s problem?”

Councillor Heley replied: “A new mechanical weed ripper/sweeper is being ordered that will allow better removal from open spaces and wide footways such as Old Shoreham Road and New Church Road.

“In addition, there is a plan to replace the push weed ripper with strimmers which increase the effectiveness in terms of transport and manoeuvring.”