‘The Witching Hour’ with Saint Agnes in Brighton 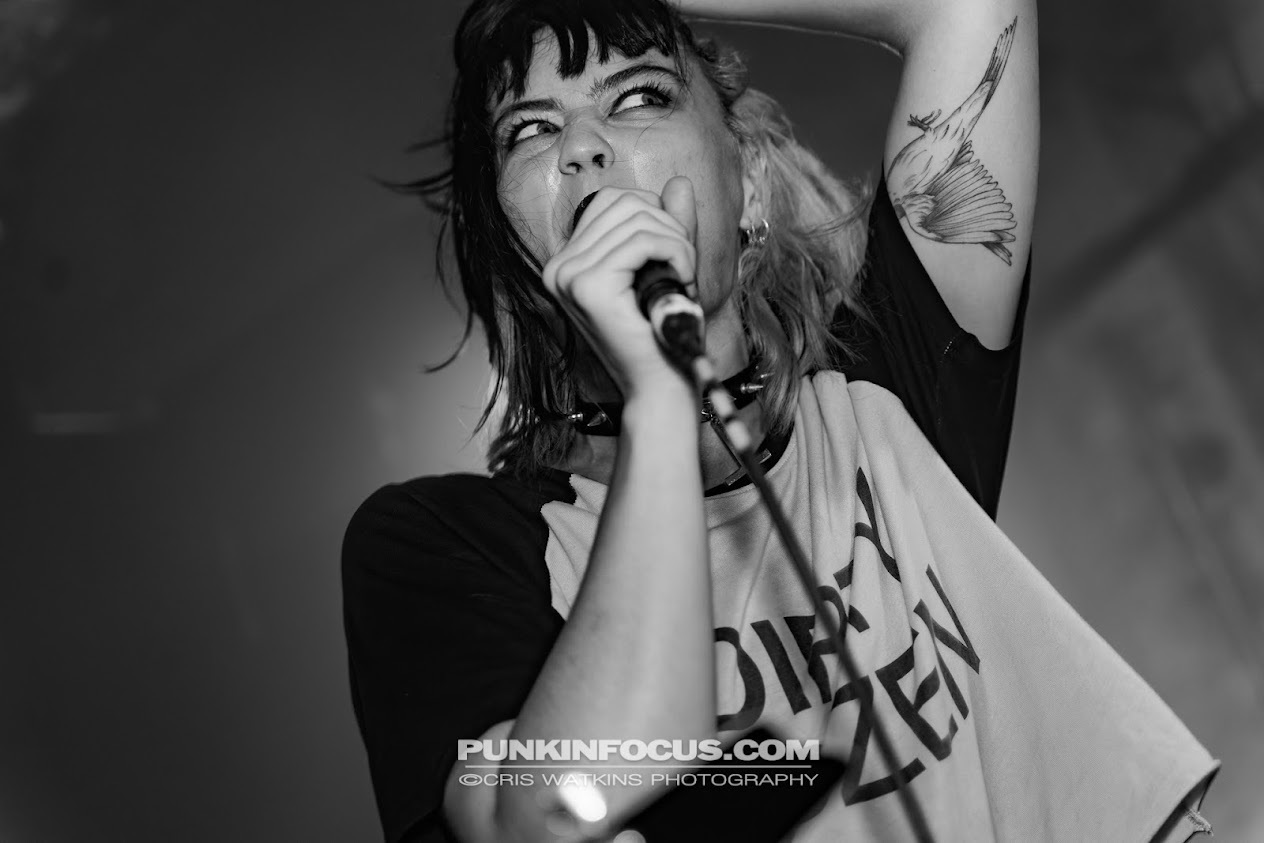 London four-piece Saint Agnes play a raw and urgent metal-tinged contemporary rock, and have forged an impressive reputation for their raucous live shows. With more than a hint of goth, their lyrics conjure a comic book world of horror-fantasy, delivered with style, sass, and blood-curdling intensity by mesmeric vocalist Kitty Arabella Austen. How appropriate then, that their tour should roll into Brighton on Halloween weekend. 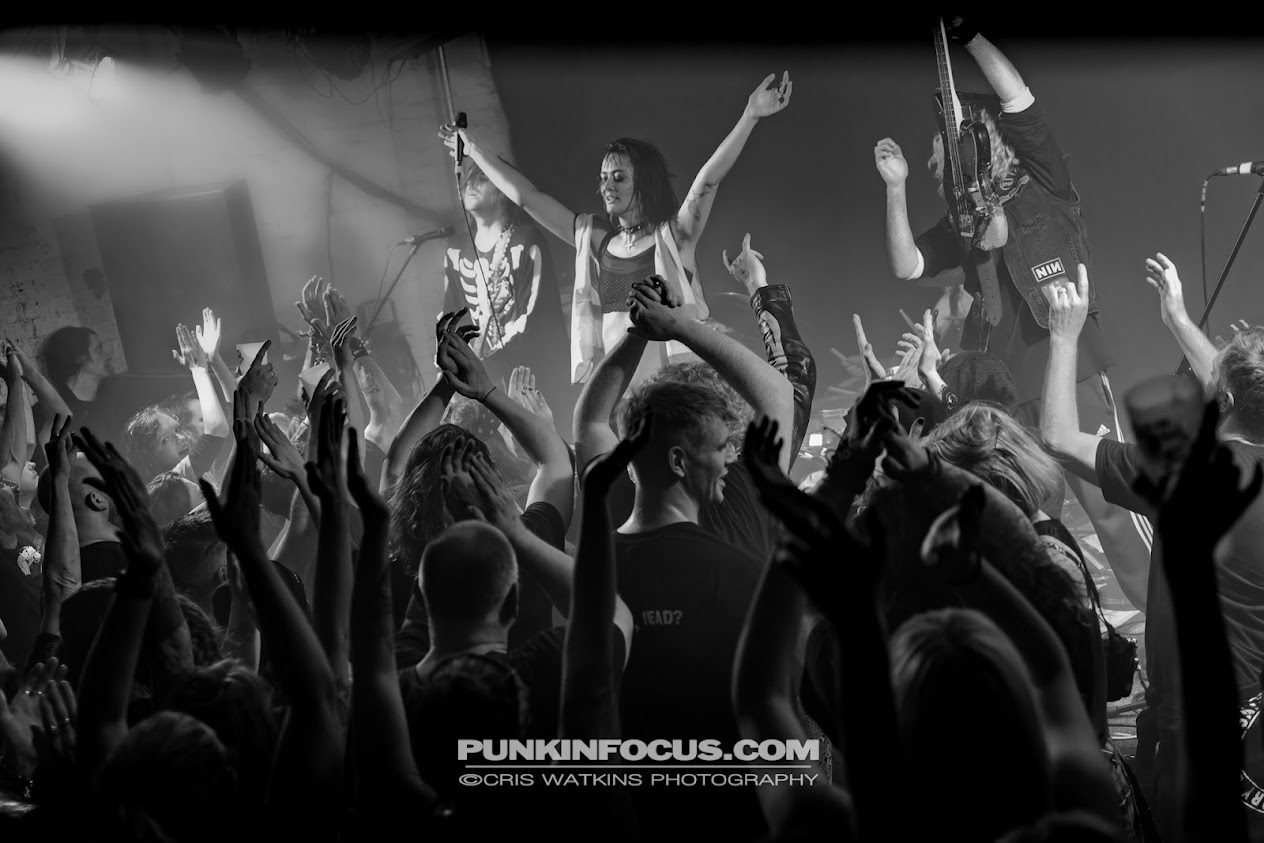 I pass a few zombies on my way to the Green Door Store, which is conveniently located in the arches under the railway station. Promoters One Inch Badge announced the show as sold out back at the beginning of September, so it’s clearly a hot ticket and there’s plenty of anticipation around the tables outside the venue. 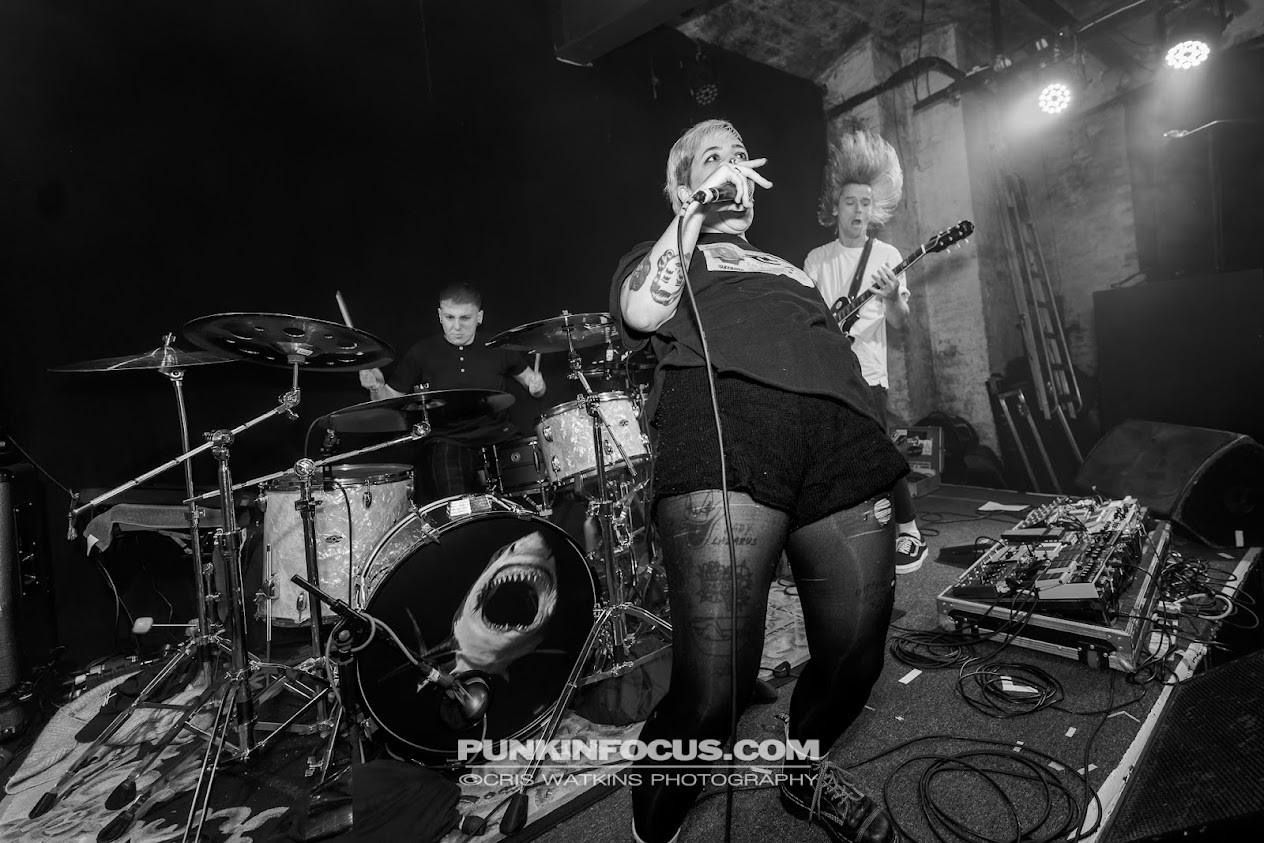 First up tonight are local three-piece CLT DRP, which clearly has some vowels missing from the name. If you were wondering which, there’s a strong hint and a witty pun in the title of their debut album ‘Without The Eyes’. They describe themselves as “feminist electro-punk” which strikes me as pretty much spot-on. There’s lots of attitude and swagger, that somehow manages to be confrontational and charming all at the same time. I like it straight away. 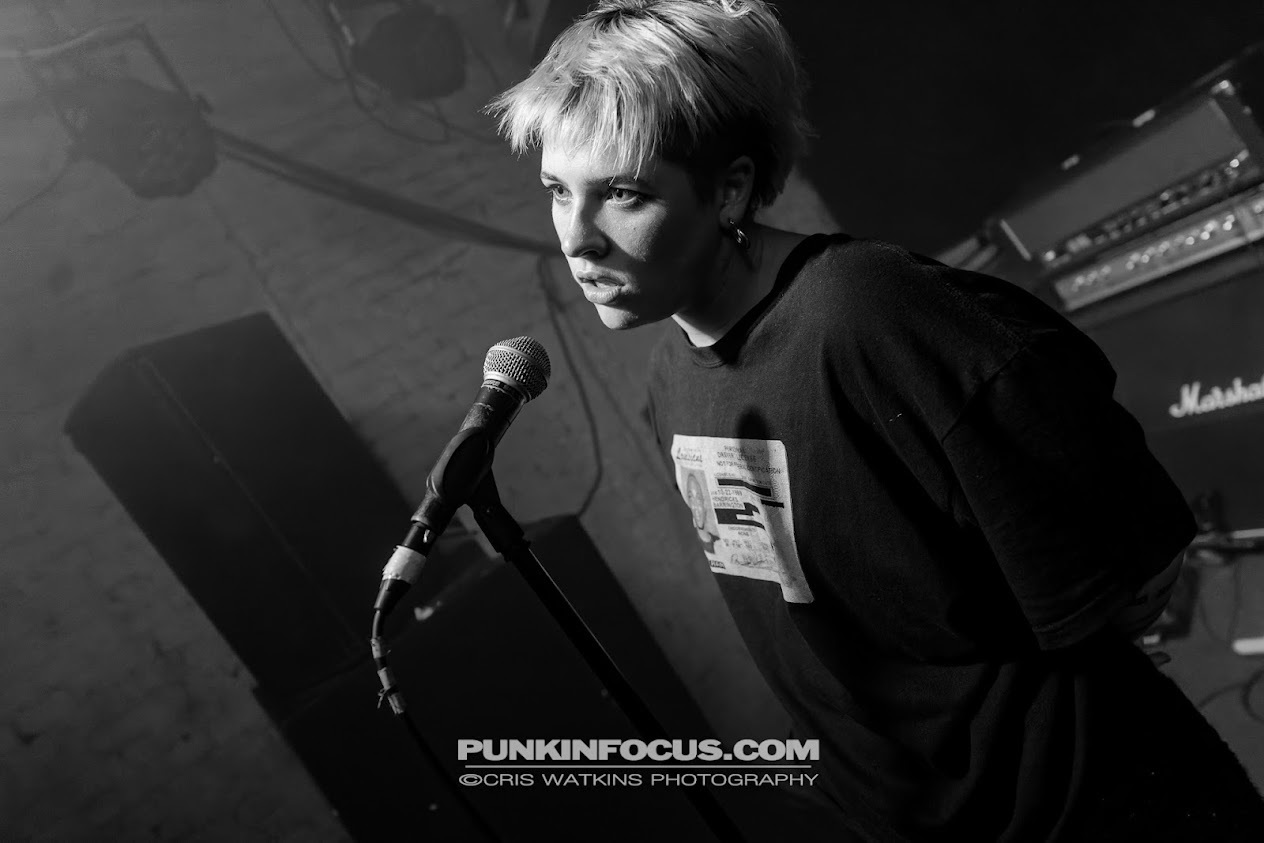 The vocalist is particularly energetic and animated, a chunky cardigan and hat being quickly discarded during opener ‘I Don’t Want To Go To The Gym’. The electro part is delivered via guitar (an Epiphone Les Paul) rather than keyboards, the signal wending a tortuous path through a mind-bogglingly massive board of effects. The output is varied and interesting, with throbbing oscillations, howling electronic shrieks, dramatic crunches, and vast pitch shifts that render any bass instrument unnecessary. The drumming is superb, on an acoustic kit supplemented by an Alesis trigger pad, switching effortlessly between delicate and intricate rhythms and energetic rap-rock. There are plenty of stops, nicely emphasised with cool stick flourishes or by jumping out of the seat. 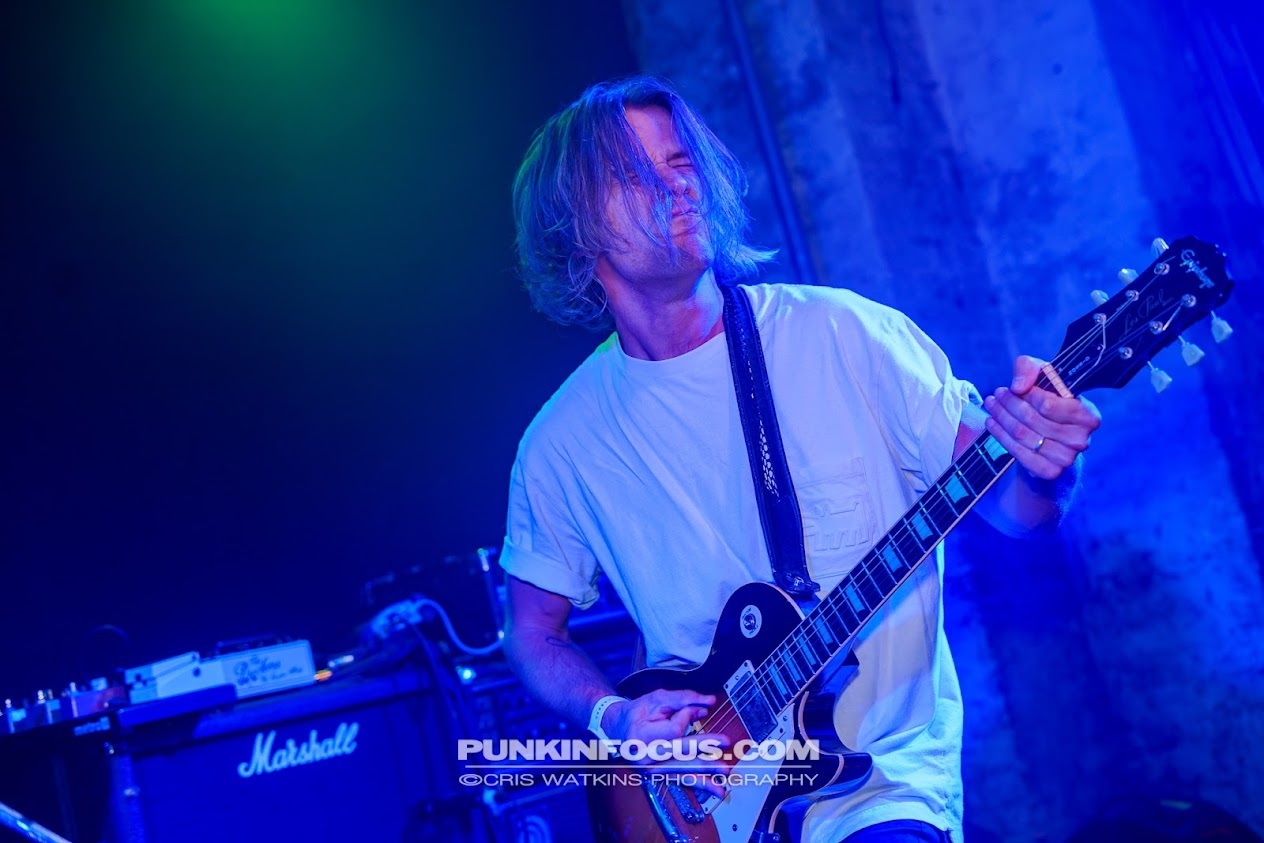 The songs are strong too. The juddering rhythm of ‘Zoom 20’ gets a bit of fancy strobe lighting, which suggests the band have won over the venue techs as well as the audience. ‘Seesaw’ is a standout number for me, a funky rap punctuated with little flurries of falsetto vocal. ‘Speak To My’ is sassily engaging and stridently aggressive, whilst ‘Ownership’ has delightfully weird pitch shifting and gets busily electronic, with the trigger pad seeing plenty of use. Set closer ‘Where The Boys Are’ takes it to the max, with an urgent electro riff broken by crunching stabs. It’s an impressive set that makes me want to check out their album. I have a feeling this is a band to watch out for. 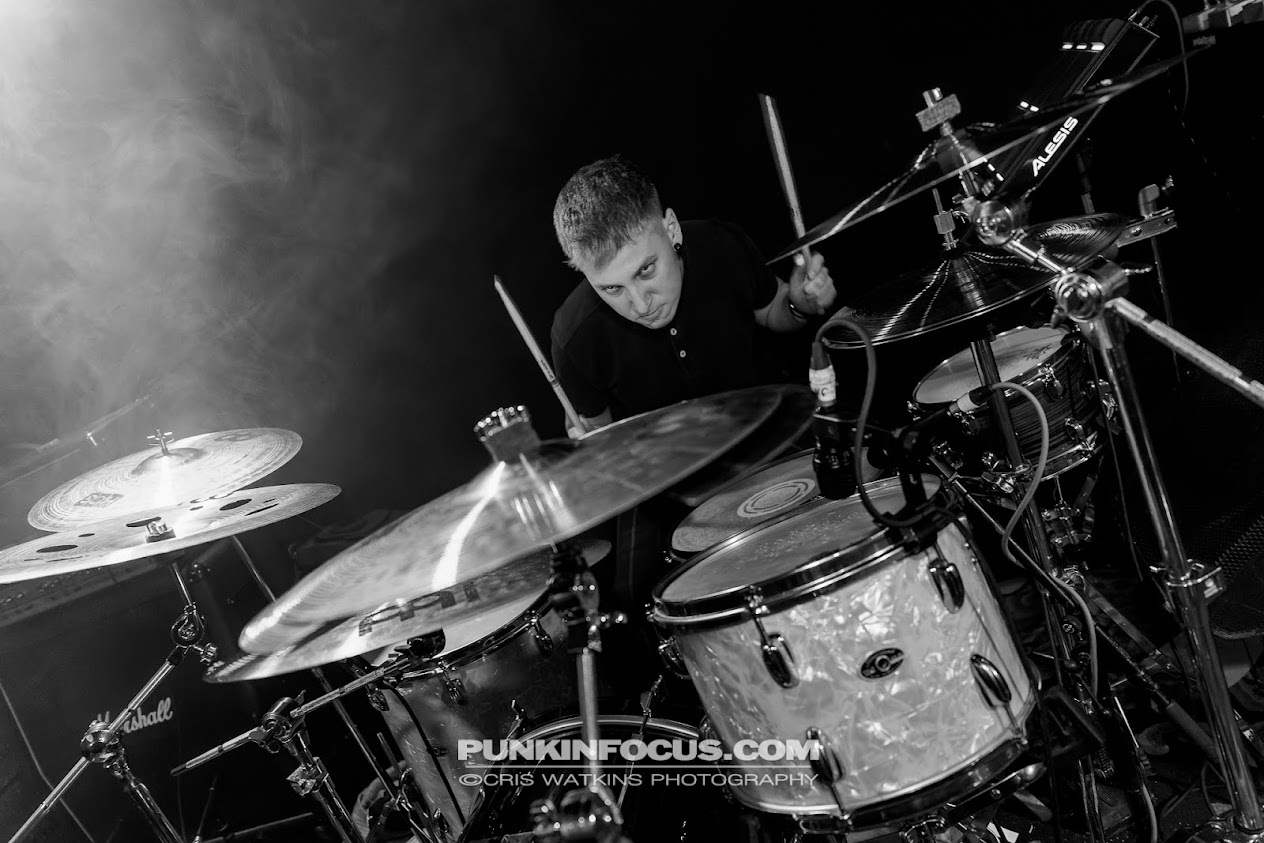 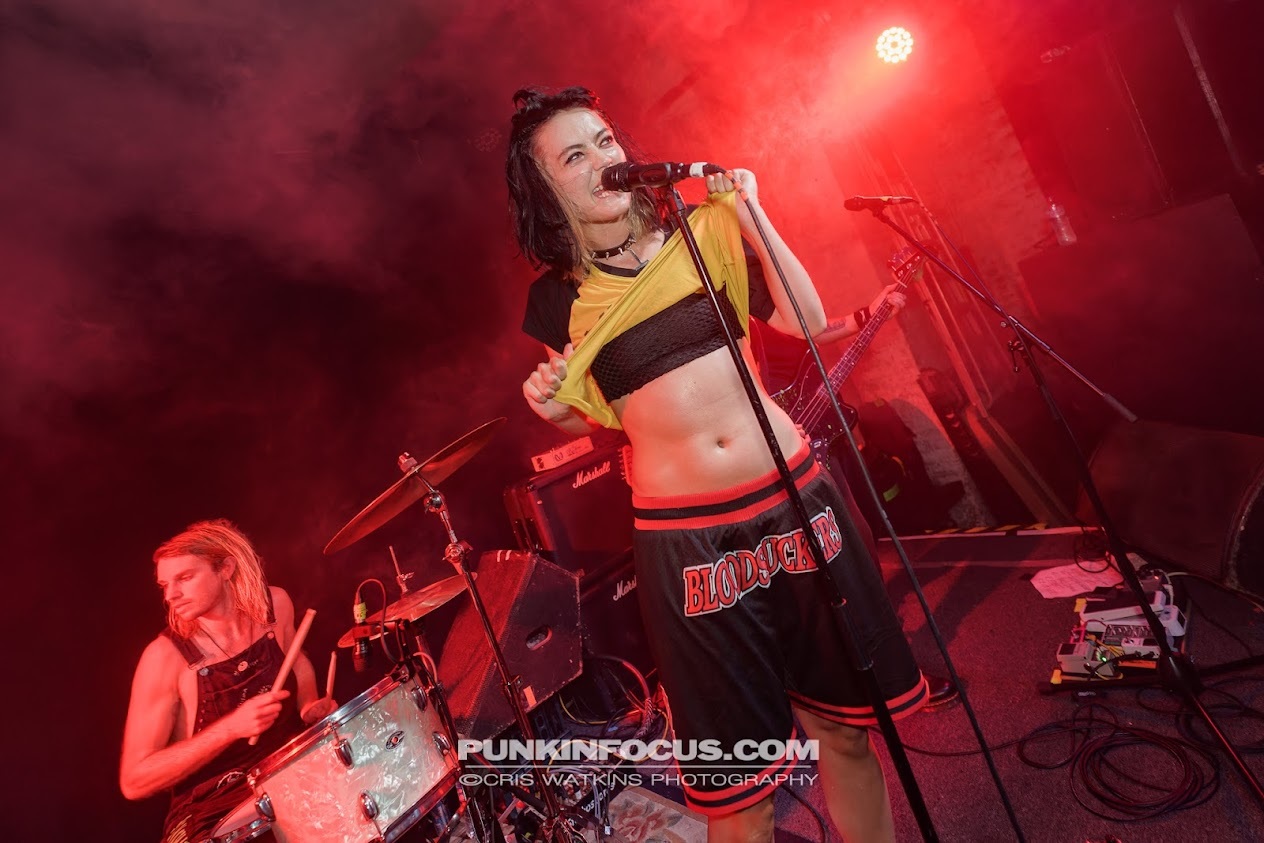 The weather outside is quite clement for late October, but under the arches the stage has suddenly got very foggy in anticipation of the main event. The venue is full and we’re all having a dance on the cobblestones to ‘Firestarter’ by The Prodigy. There’s a massive cheer when a vibey piece of intro music strikes up and Saint Agnes emerge from the murky gloom. The band launches into ‘Daughter Of Lucifer’ and the crowd launches into an ecstatic frenzy. 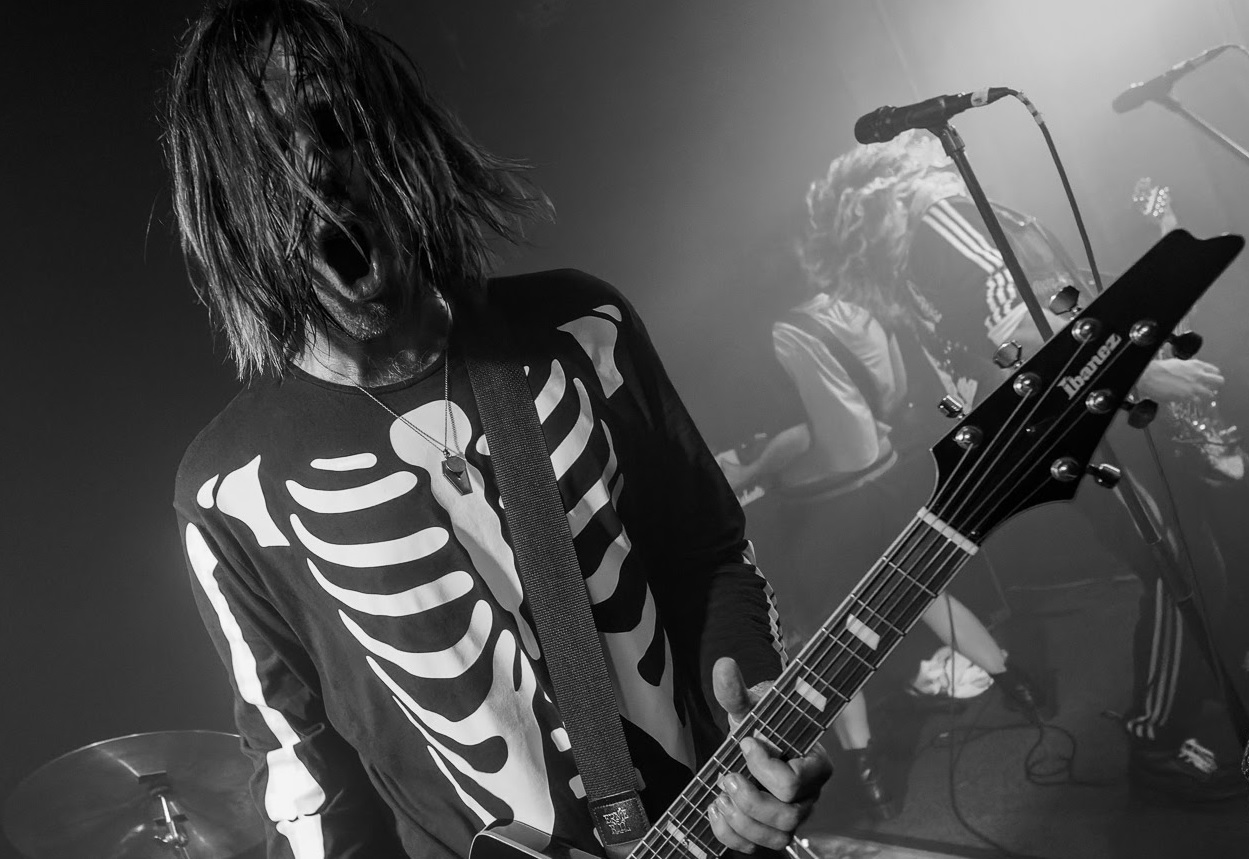 Centre stage and centre of attention is Kitty, with black bobbed hair and eyes that could pierce your soul. She is initially playing an interesting looking three pickup Hofner Galaxie guitar, with 1960s styling and a chunky whammy bar, though this is soon put aside to prowl the stage. Tonight the gothic look has been eschewed in favour of more comfortable sportswear, including some voluminous shorts that only a small minority of people could ever hope to look cool in. Needless to say, she does. 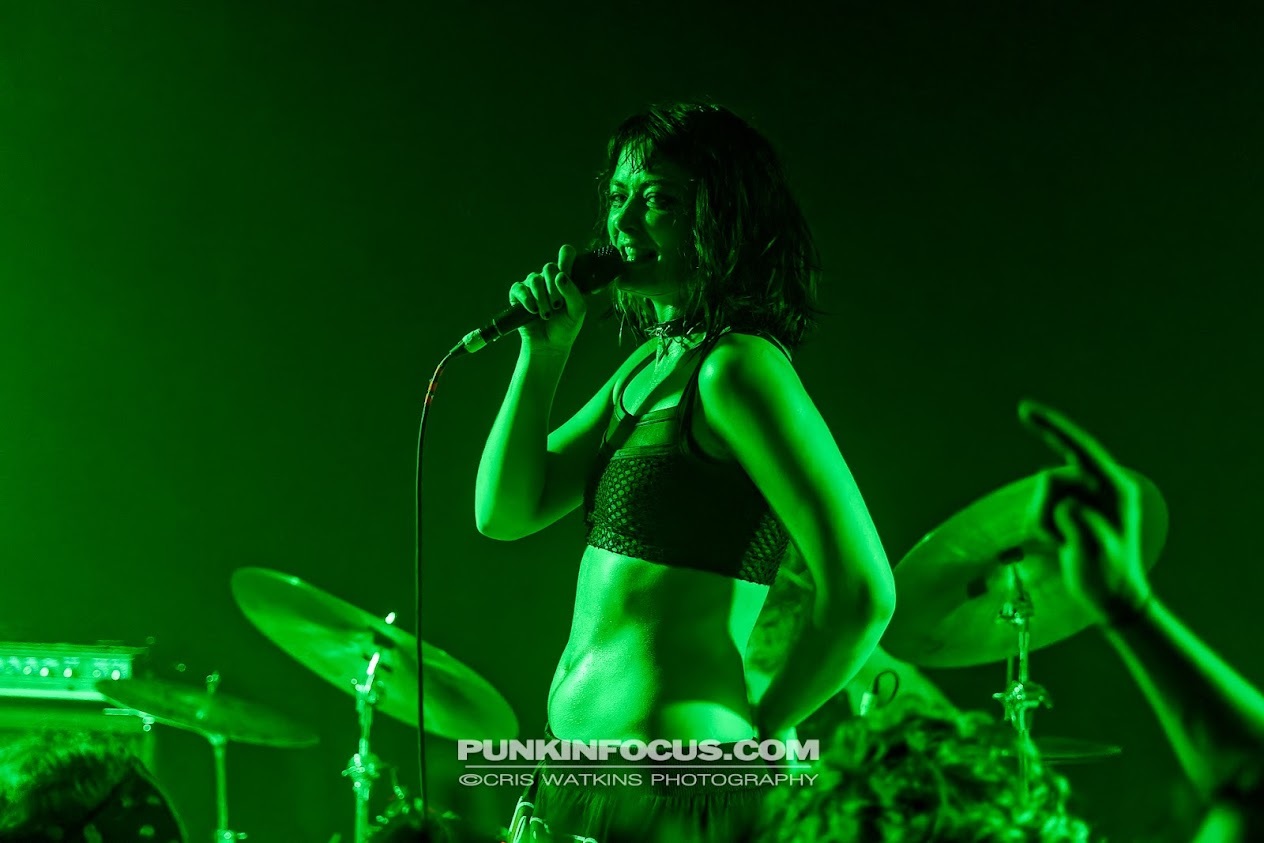 House left is guitarist Jon James Tufnell, wrangling howls and growls of effects-laden guitar from the sort of crazy shaped Ibanez beloved of metal players. His sartorial style of a black hoodie with a glow-in-the-dark skeleton print has found favour with some of the audience too. House right, bassist Ben coaxes a thunderous rumble from a Fender Jaguar bass that looks like it’s been assaulted with a spray can of luminous green paint. A huge shock of corkscrew hair bounces as he plays. Behind the kit, drummer Andy unleashes breathtakingly fast and tight fills, with little flurries of cascading triplets that make my heart skip a beat, even though he doesn’t. 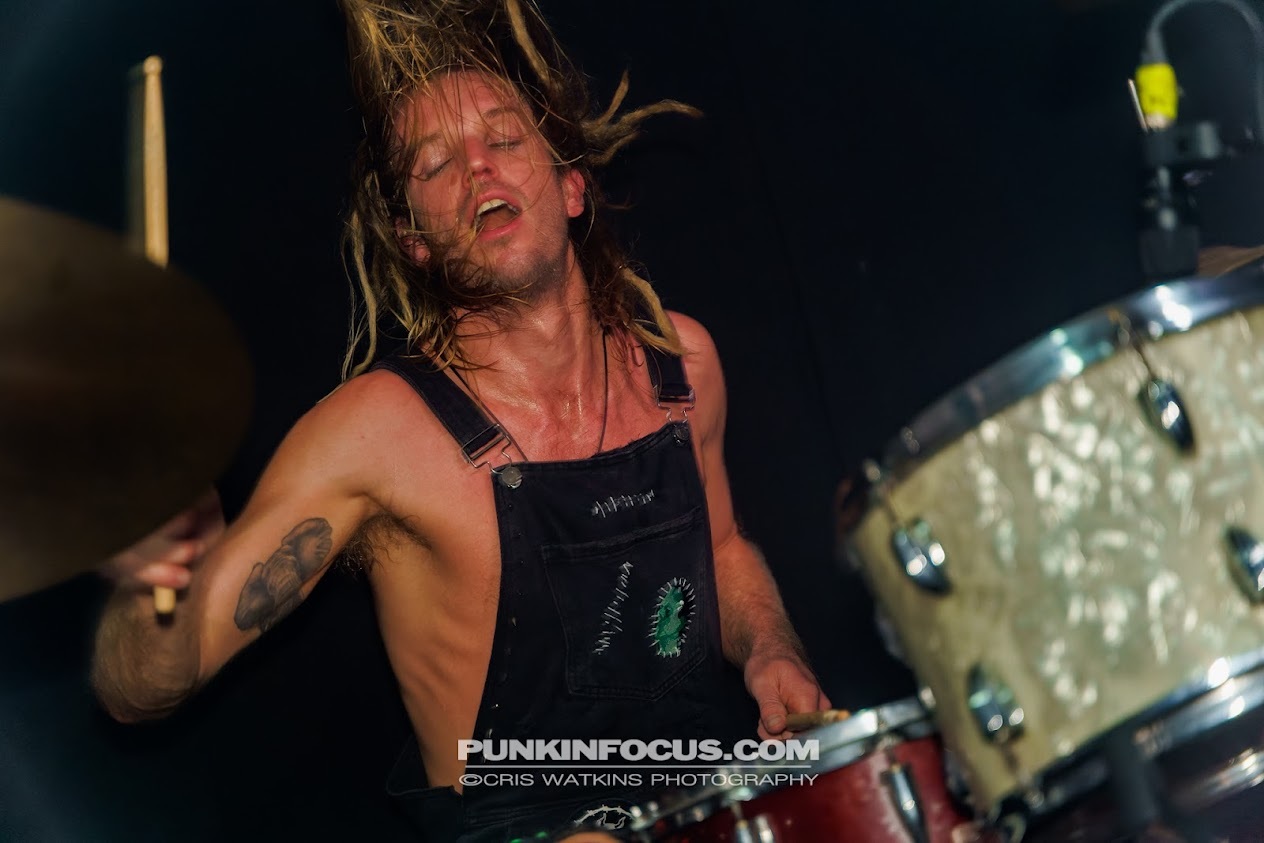 Shouty, bouncy choruses convert the audience to a lurching, air-punching mass of humanity. We’re having a splendid time, and it’s only the first song. A howling banshee wail introduces ‘I’m With You Everywhere You Go’, from the recent mini-album ‘Vampire’.

“Let’s see those horns in the air!” implores Kitty (it’s a rock thing). The crowd dutifully obliges. The song snarls and crashes into an outro with plenty of screeching lead and tumbling drum fills. As it concludes, some of the crowd are chanting the drummer’s name: “And-y!” 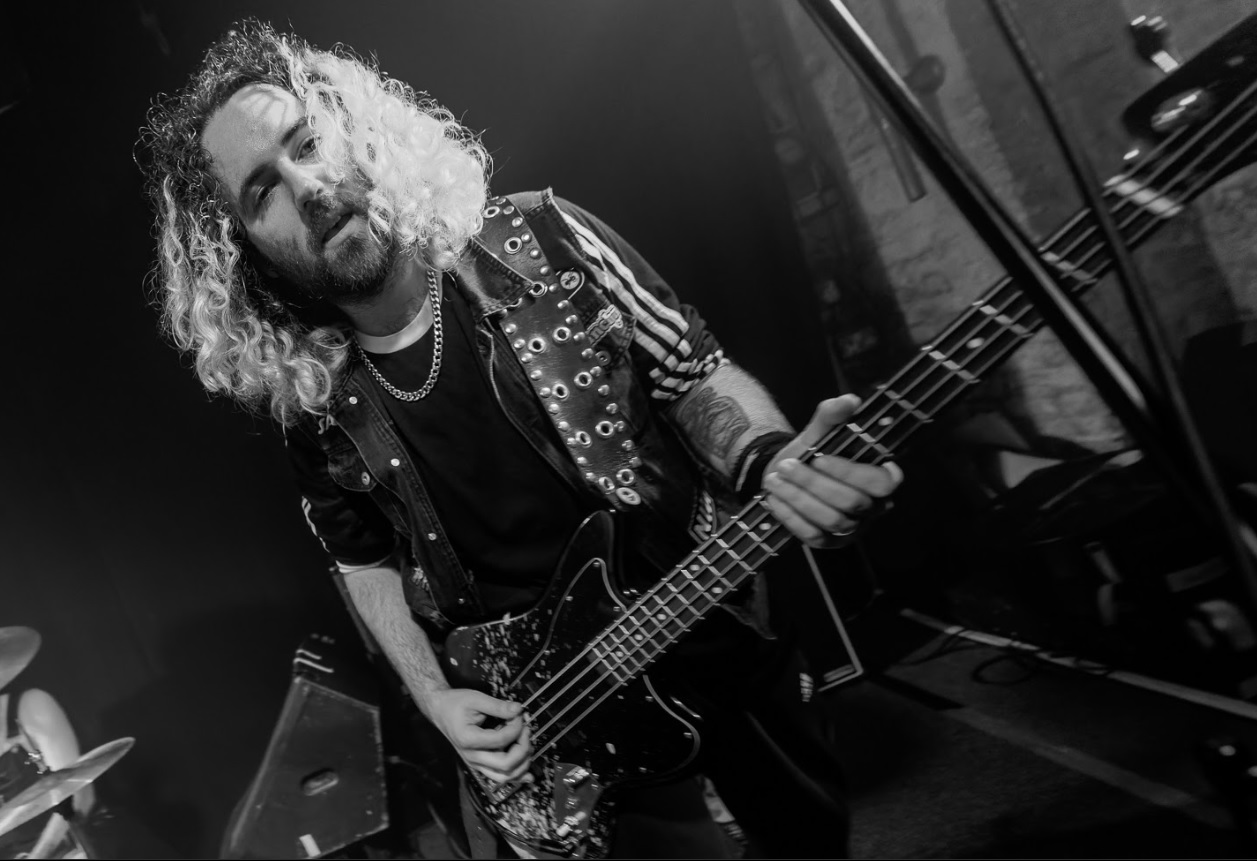 There’s a pause for a brief chat. Kitty’s voice is going (it’s the tenth night of the tour) so she needs us all to sing along. She also confides that she’s had a tough time of it recently. “It’s really important to grasp moments of joy where you can…. enjoy yourselves, whenever you get the opportunity…. because you don’t know what’s round the corner.” Wise words, and that’s certainly my approach to life.

‘Uppercut!’ Is the latest single, and is as ferociously punchy as its title suggests. Kitty is doing her best boxing moves, and I’m pleased to see that the shark from the cover art has made its way onto the front skin of the kick drum. 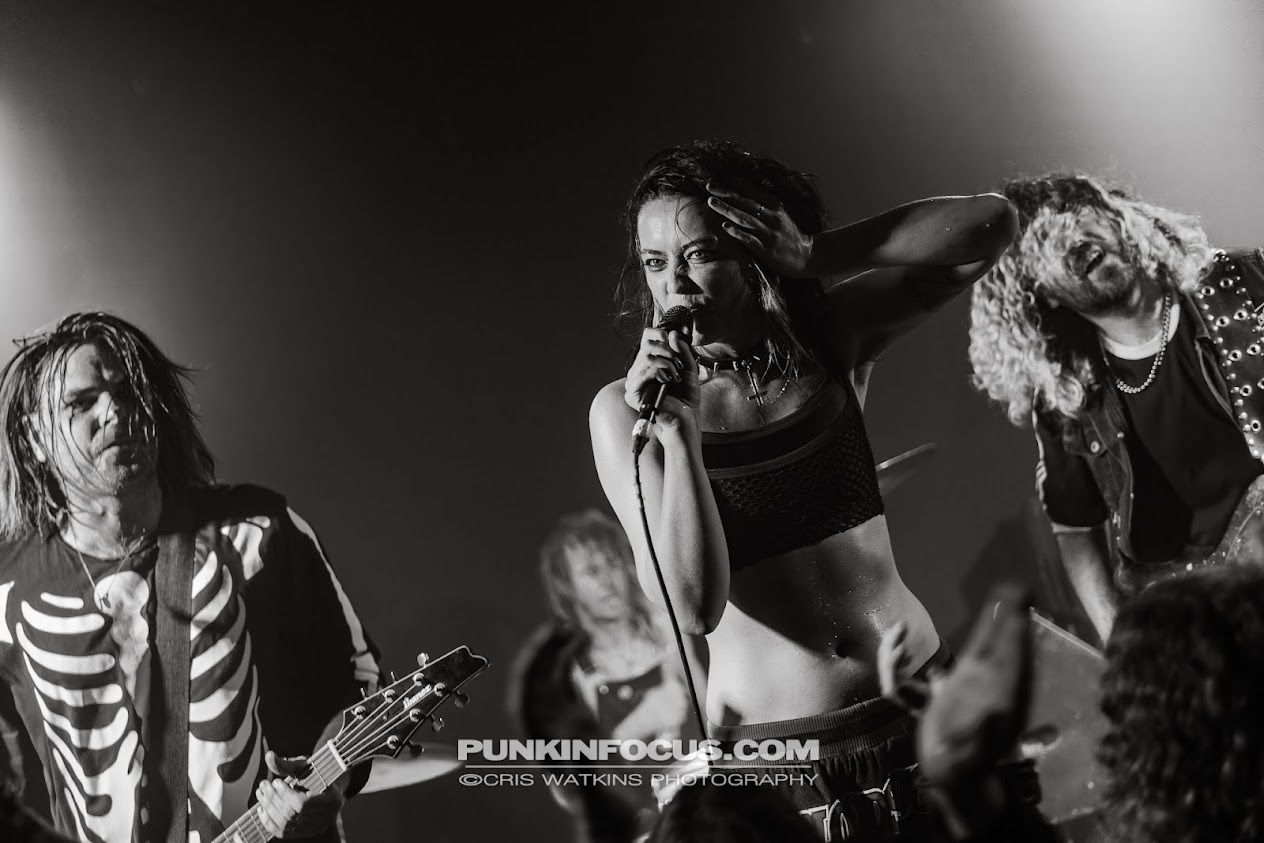 ‘Welcome To Silvertown’ (the part of East London they’re from) is the title track from the band’s 2019 debut album, and I noticed recently it had clocked a commendable five million plays on Spotify. It’s a cracking song, and as if it wasn’t exciting enough, the band segue into the “F*ck you, I won’t do what you tell me” section from ‘Killing In The Name’ by Rage Against The Machine. By now some fairly vigorous moshing is underway, much to the chagrin of a hapless photographer (not our Cris, I hasten to add) who seems to be a collision magnet. 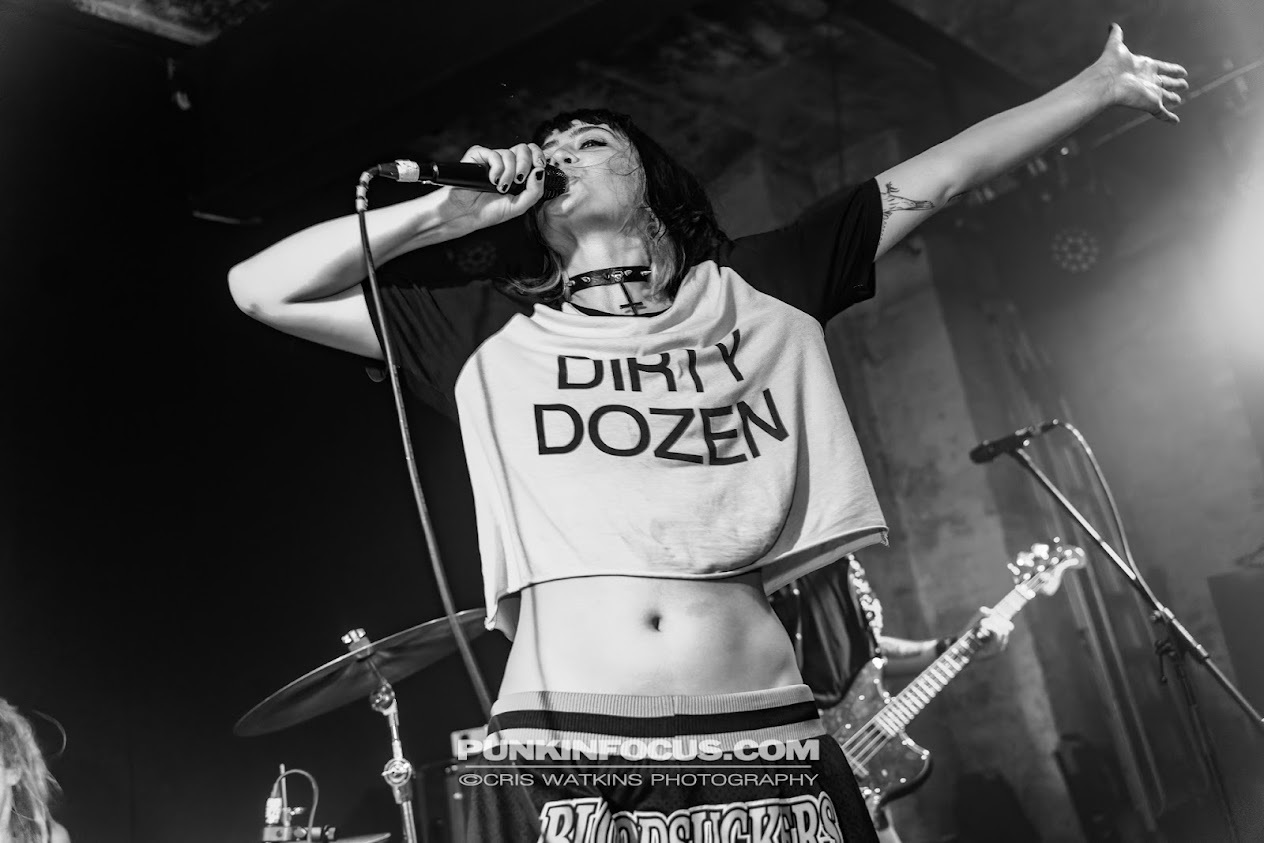 There’s a brief change of pace for the opening section of ‘The Meanest Little Kid In Town’, before we go full goth with ‘The Witching Hour’. Depending on your tradition, the period of peak supernatural activity is either the hour after midnight, or between 3am and 4am. In Brighton, those time slots are traditionally reserved for clubbing rather than live music, so we are currently between 9pm and 10pm. At least I’ll be able to get a train home with the other ghouls and fiends.
The song has an epic breakdown, and the fancy Hofner guitar is back on to provide some extra twang and vibrato. The overall effect is of a majestically cinematic soundscape. 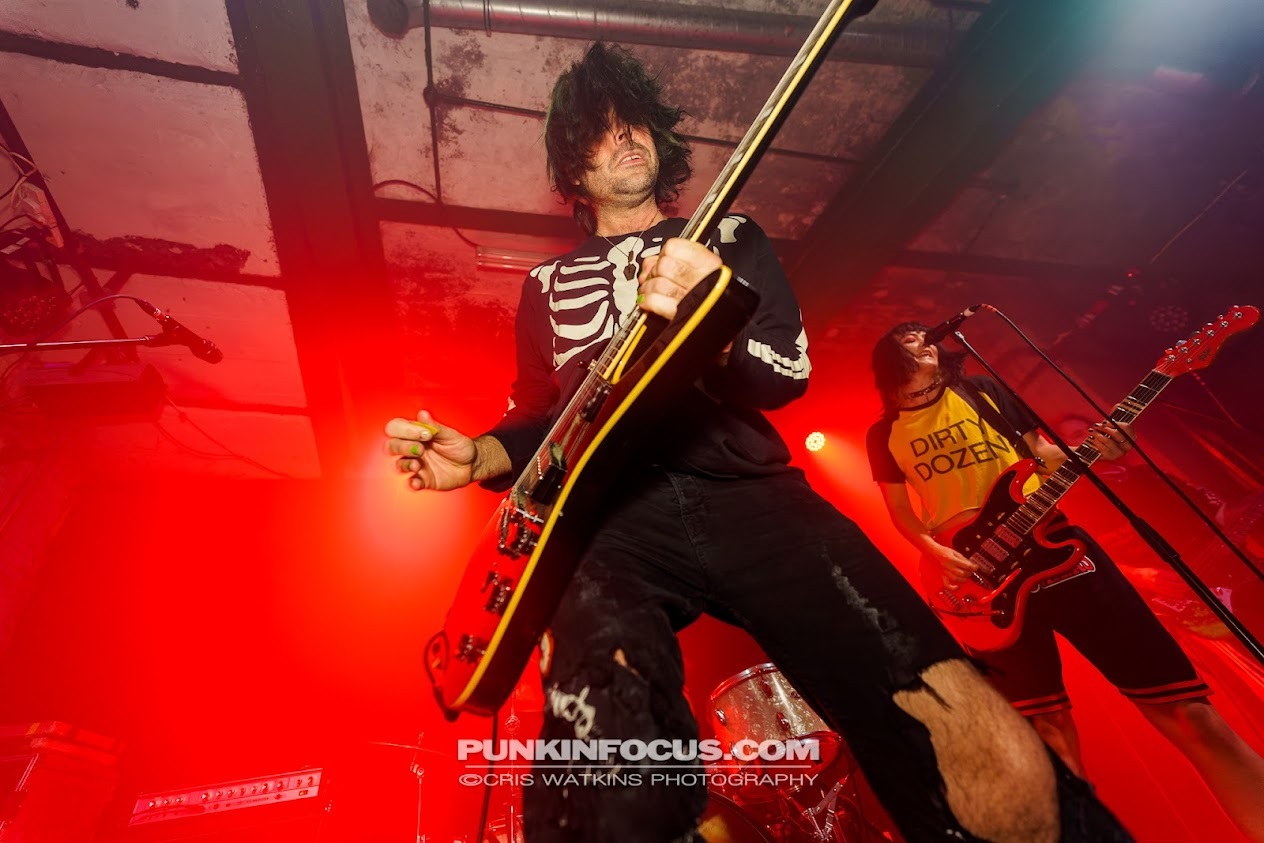 We’re back to bouncing and punching the air for the “I’ve got a bigger gang than you” chantalong hook of ‘And They All Fall Down’. Everything gets pretty crazy for ‘Repent’, a striking standout track from ‘Vampire’. Jon is positively encouraging crowd surfing. Brighton audiences are sometimes a bit too cool for that sort of thing, and the cobblestone floor doesn’t look too inviting to land on if you get dropped, but a few plucky types give it a go. 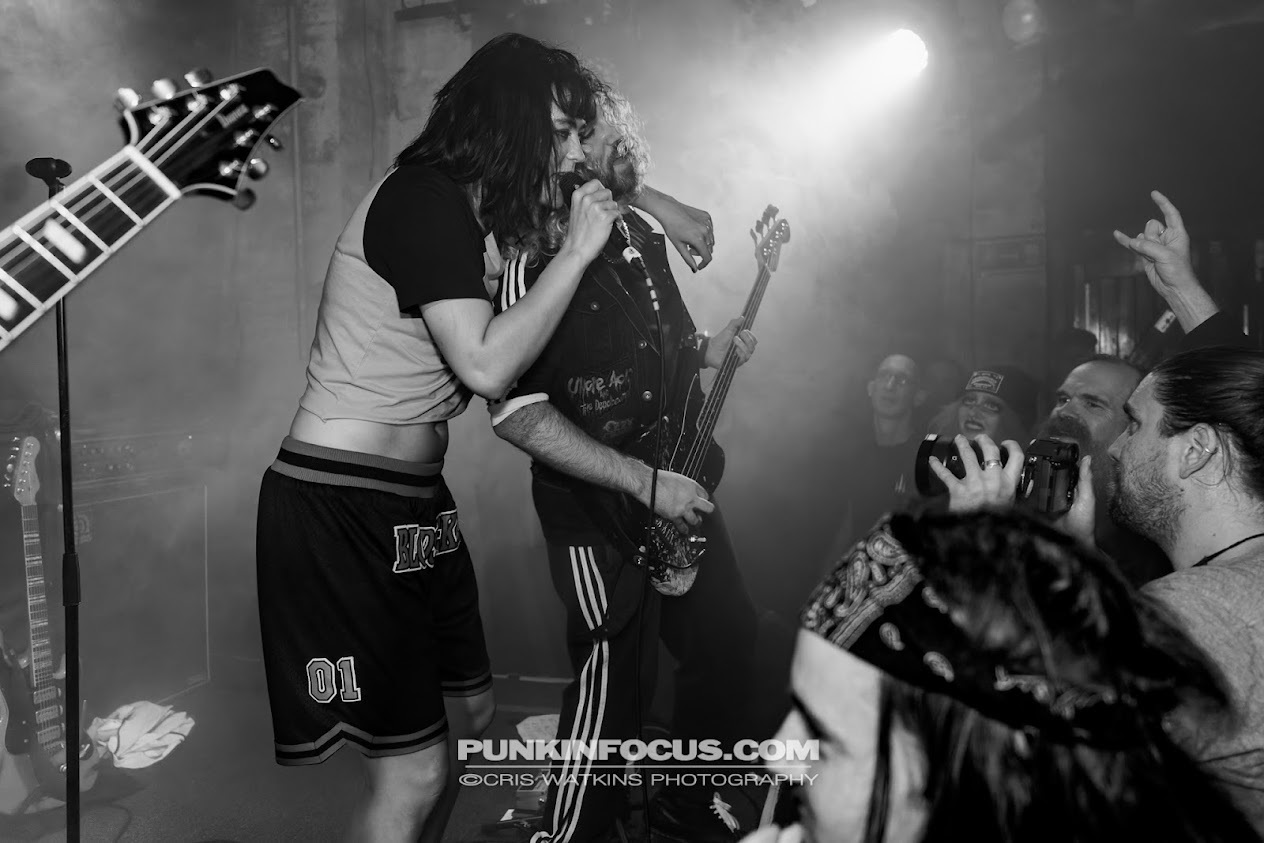 Whatever sort of tough time Kitty’s been through, she’s a bit tearful delivering a heartfelt thank you to her bandmates for their support, and they have a very touching group hug on stage. She also explains that the band never do encores, as they put everything they have into the songs they play. There is no doubting the intensity of their performance. Everyone in the room is flinging themselves around with wild abandon one last time for the closing number, ‘Brother’, before we head off to mingle with the creatures of the night.

When it comes to style, sass, musical skill, and passion, Saint Agnes have the lot. Catch them while you can in smaller venues. I doubt they’ll be playing them for much longer. 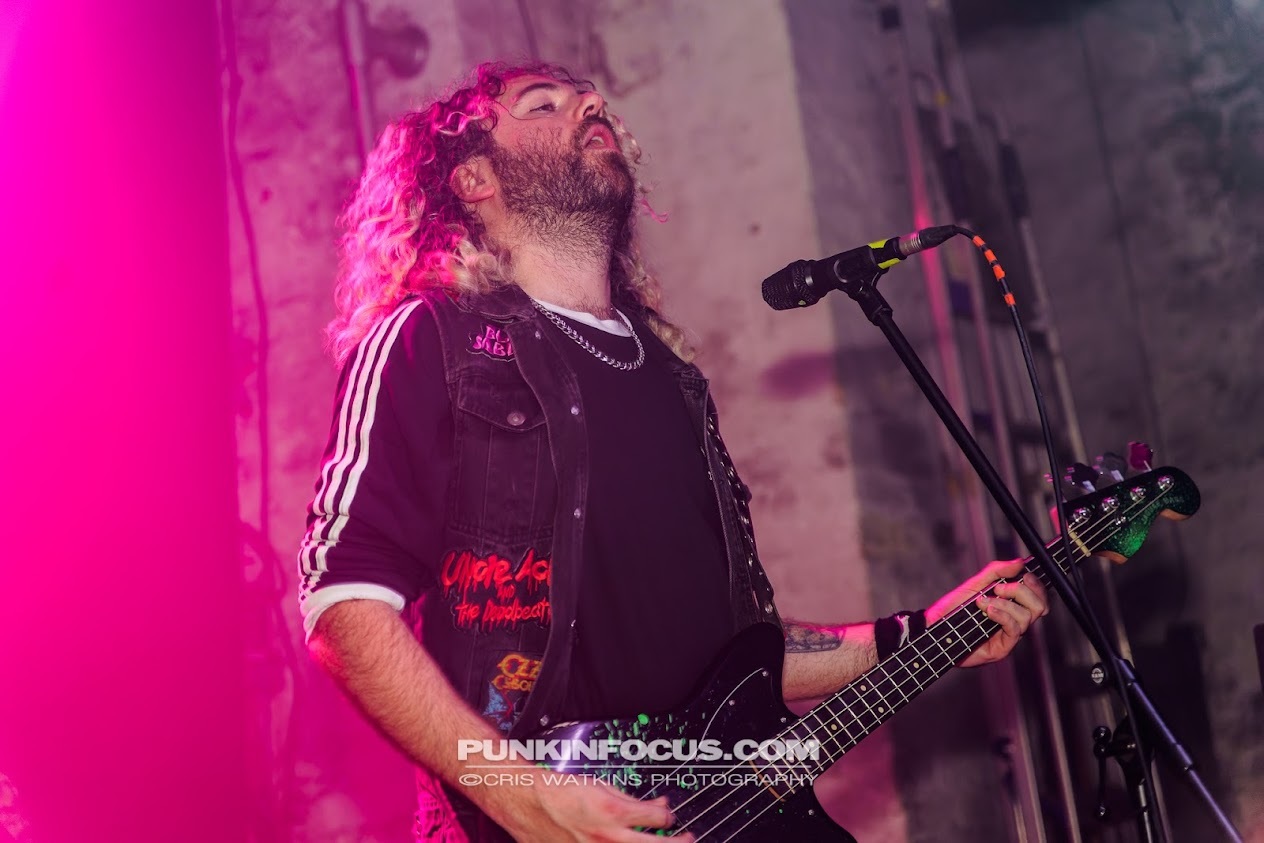 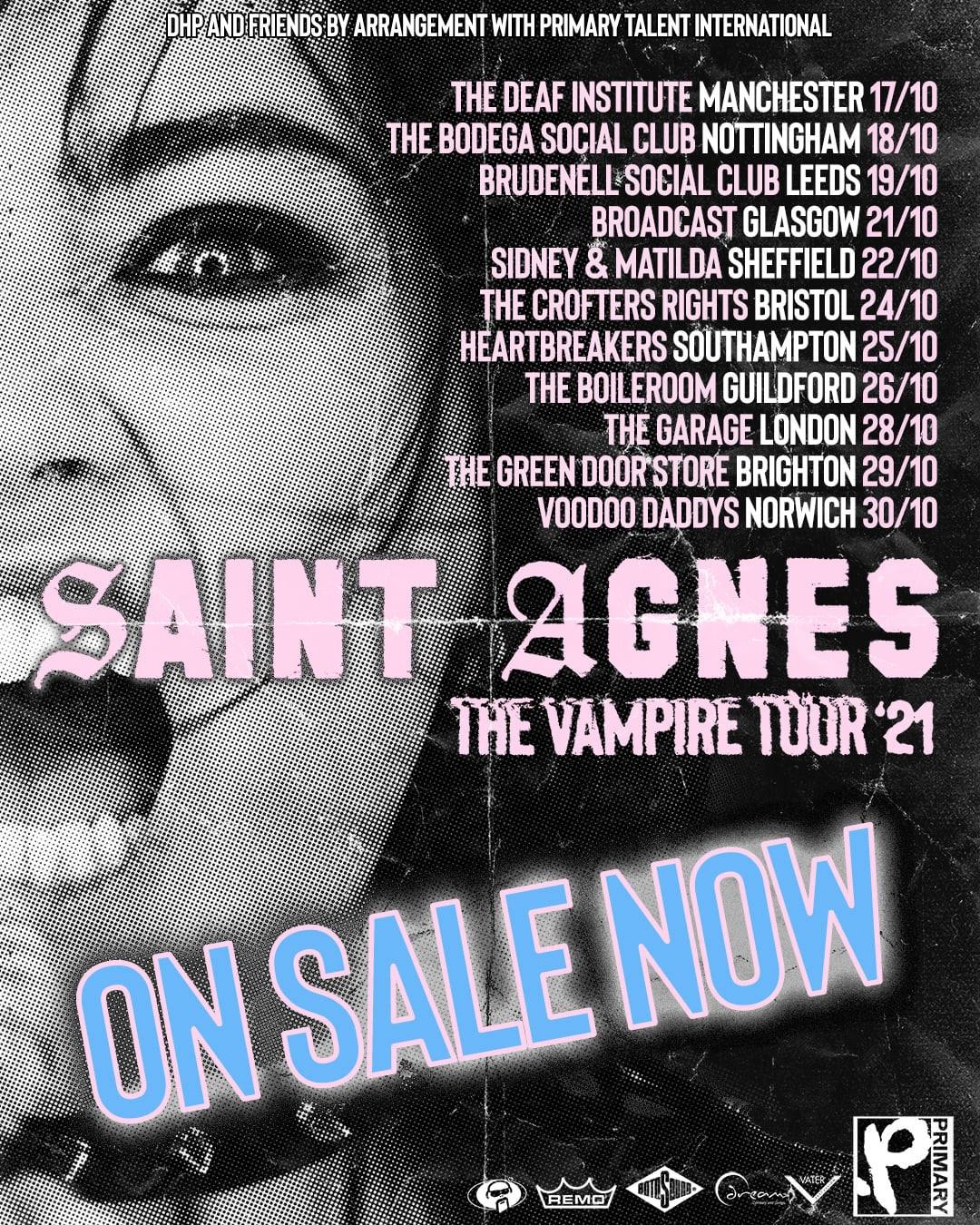 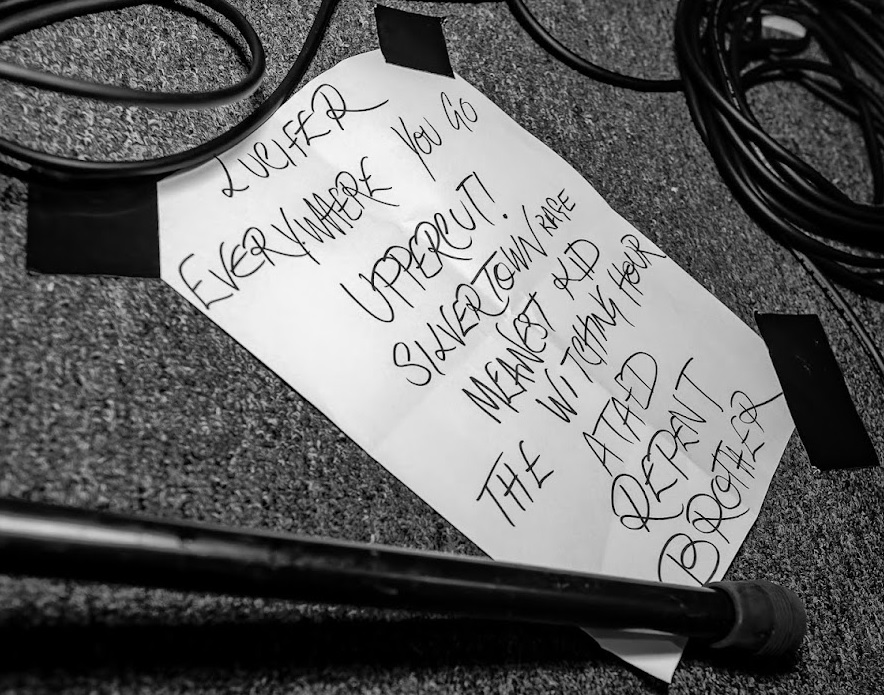