The Italian Serie A side Genoa have signed Brighton and Hove Albion defender Leo Ostigard on loan for the rest of the season. 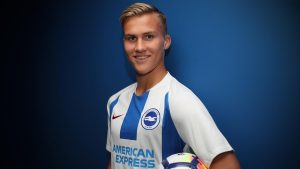 Ostigard was recalled from his loan spell with Stoke City who are currently just off the play-off places in the Championship.

The 22-year-old Norwegian made 13 league appearances for the Potters, scoring once in a 3-1 victory at Swansea City.

Albion’s pathway development manager David Weir said: “Leo has made excellent progress during his loan spells in the second tier in Germany and here in the Championship, with Coventry and Stoke, but this gives him the chance to play at the top level.

“It is an excellent opportunity to play in the top division of Italian football, against some of Europe’s top teams, and we will be monitoring his progress out in Italy.”

Ostigard signed for Albion from Molde in 2018, before spending the 2019-20 campaign on loan with German second division side St Pauli.

That was followed by a successful 2020-21 campaign with Coventry City, where he helped Mark Robins’s side maintain their Championship status, having returned to the second tier after an eight-year absence.

Meanwhile, Brighton and Hove Albion said that goalkeeper Carl Rushworth had signed a new contract with the club until June 2025.

Albion said: “The 20-year-old is currently on a season-long loan with League Two Walsall, where he has kept eight clean sheets in 28 games in all competitions.”

Technical director Dan Ashworth said: “Carl has continued to impress us with his development since joining the club in 2019 and he fully deserves this new contract.

“He has trusted the pathway we have put him on, starting with a really positive loan with Worthing, followed by a year with the under-23s and is now testing and proving himself in League Two with Walsall.

“This season was about Carl showing what he has learned so far and building on that. We’re pleased to see that he is flourishing.”

Albion’s first-team goalkeeping coach Ben Roberts said: “Carl has been a breath of fresh air since joining the club from Halifax Town and relished every challenge that has come his way.

“He is a consummate professional on and off the field, with a real dedication to his craft. He epitomises what we look for from the modern, in-possession goalkeeper, and look forward to supporting his development in the years to come.”

Albion said: “The keeper came through the ranks with Huddersfield Town, before joining Halifax Town in 2017.

“He signed for Albion in January 2019 and spent the 2019-20 season on loan in the Isthmian League Premier Division with Worthing.

“A campaign with Albion under-23s followed and he capped that by winning the club’s Men’s Young Player of the Year Award.

“He signed for the Saddlers at the beginning of this season, and his form with Matt Taylor’s men was rewarded with a call-up to the England under-21s squad in October.”