An abnormal load was blamed for causing congestion and chaos on the roads in and around Brighton and Hove today (Saturday 19 March).

An electric reactor and a transformer are being transported along a 41-mile route from Shoreham Harbour to a National Grid electricity sub-station at Ninfield, between Bexhill and Battle.

The load was scheduled to leave the harbour at 9.30am but left nearer to midday – some two and a half hours later than planned.

And it was due to go through the A23 junction at Patcham at about 10.30am – rather than use the A27 flyover because the load is so heavy.

But the two 300-tonne loads – each more than 70 metres long – reached the roundabout about six hours later than expected. 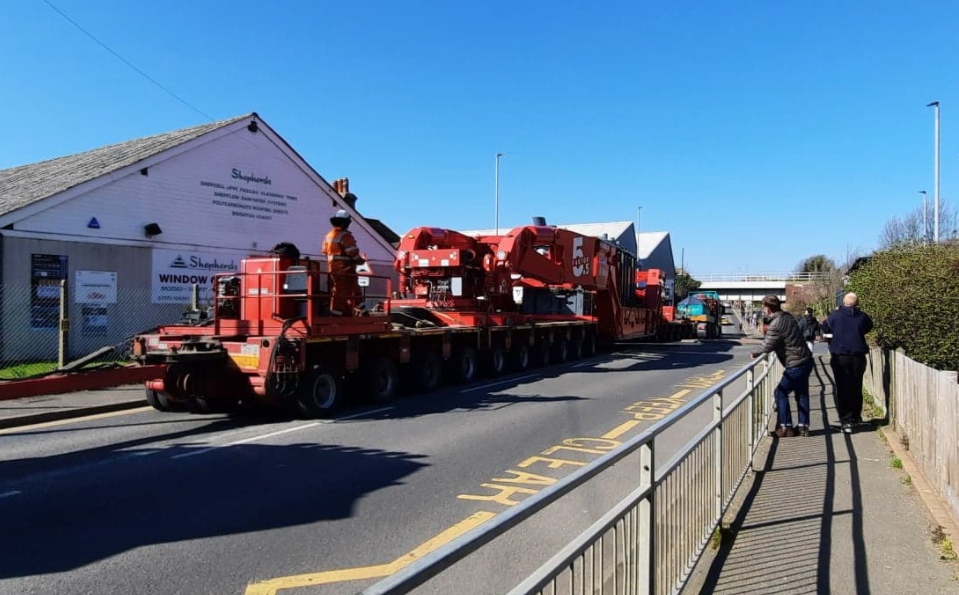 The load reached Southern Cross at about 1.20pm – Picture by Sarah Ison

Earlier this week National Grid said: “Due to the complexity of moving equipment of this size there will be significant disruption to traffic on the A27 and A259 which has been chosen by the police as the safest route for the convoy to take across the county.

“The A27 between the Ashcombe roundabout and the Southerham roundabout will be closed from 6am to 8pm while a temporary bridge is set up so the convoy can safely cross the River Ouse.

Sussex Police thanked drivers for their patience as queues grew – for longer and later in the day than anticipated.

Sticky situation at the A27 Portslade Junction as a trailer carrying a 300-tonne item for the National Grid experiences a fluid leak.#Portslade #Brighton pic.twitter.com/3yFiPLHHJV

Thanks to everyone who’s been patient because of todays abnormal load movement.

It is behind schedule, just entering the #A27 at Hangleton heading Eastbound… #CO050 pic.twitter.com/zyhKvtutys

The abnormal load has passed through the jct of the #A27 & #A23 at #Patcham & is on the A27 heading towards #Lewes. Police are temporarily holding traffic to allow the convoy to pass. Questions? Call National Grid➡️0800 319 6175. For route & rough timings: https://t.co/YKl2qutsvf