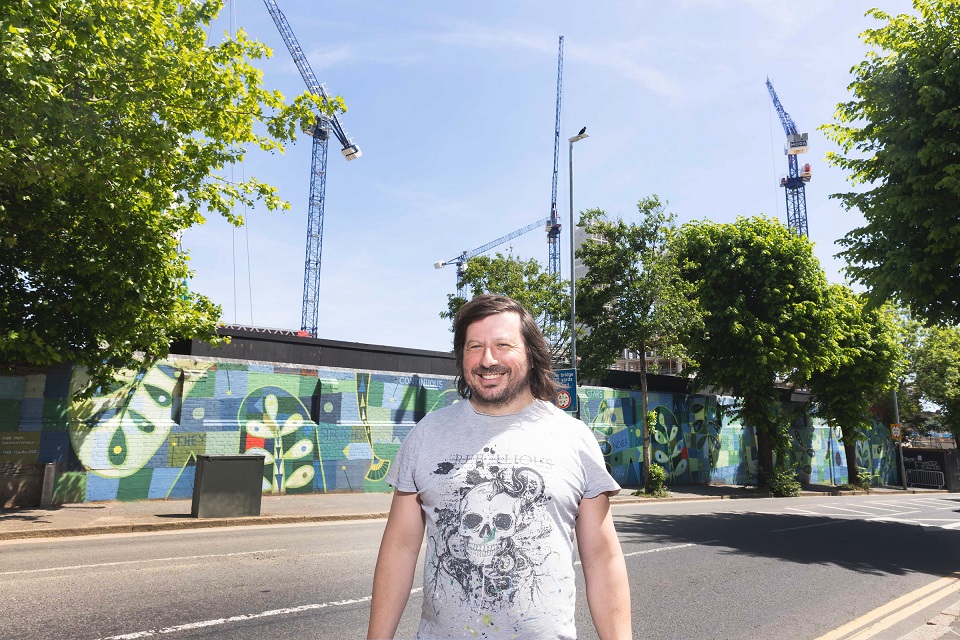 A Brighton artist has created a mural inspired by Wordsworth’s daffodils to brighten up a Hove building site.

Tom Diamantopoulo’s mural is the first in what Moda Living intend to be a series of artworks displayed during the regeneration of Sackville Road Trading Estate.

As well as the romantic poem, Tom’s mural was inspire by the “positive transformation” this area Hove has seen over the years.

He said: “My thinking for using these themes is that the area and local community has gone through quite a few positive transformations over the years and has gradually grown and flourished, so I wanted to reflect this in my design.

“The design also reflects the philosophies and values of Moda, which builds communities that incorporate, health, happiness, and wellbeing for its residents, as well as its green ethos.”

The mural is also a nod towards nearby Poet’s Corner, and in particular Wordsworth Street. The second verse of the poem Daffodils reads:

Continuous as the stars that shine

And twinkle on the milky way,

They stretched in never-ending line

Along the margin of a bay:

Ten thousand saw I at a glance,

Tossing their heads in sprightly dance.

Tom said: “This poem reflects the themes of the mural and the community. The verse of the poem is describing daffodils, which are a mark of spring, the time of year when nature having survived winter, is now rejuvenating, blossoming and growing again.

“For me this reflects the transformations that the local area and community has been going through in recent years.

“I like to think that this verse can also be seen to be about people, perhaps the residents within the community, who revived the area years ago or even about the local area that is thriving now.”

Tom Diamantopoulo started his career as a songwriter and musician in the influential band The Eighties Matchbox B-Line Disaster, releasing three albums and touring the UK, Europe and America, before deciding to focus on his passion for art.

His work features large abstract shapes rooted in colourism and expressionism. Tom, who works out of his studio in Brighton, was born colour blind but loves working with bold and bright colours and textures and his work features on the exterior of Franco Manca in North Street.

His father Pierre Diamantopoulo is the sculptor behind Flight of the Langoustine, which will be the second sculpture for Hove Plinth.

Moda selected three local artists as the winners of its competition to design a mural, which will feature on an exterior wall at the Sackville Road site during construction of the new neighbourhood.

“We had a fantastic response to our call for artists to design a mural from so much local talent, so it was a real challenge for our judging panel to select the final three.

“The winners are all from Brighton and Hove, with two of them living just a few roads away from the development, so they will be able to walk out of their homes and see their art in their community.

“The mural designs will showcase the features that make Hove such a special place to live and the community that we are building in Sackville Road.

“Our development will give people a place where they can form new friendships, join in with group activities and have access to whole range of wellness support services. They’ll also know that their rental property is there to stay, giving them a place they can call home for as long as they need it.”

The 564 new homes, ten per cent of which will be affordable, will cater to all ages and requirements, ranging from studio apartments to three-bedroom homes.

The development’s two tallest building cores are both complete. Work on the third building is underway and groundworks are ongoing on the site.