Scores of people have held a protest against the Royal Mail’s plans to build a new sorting office in Patcham and they have a second public meeting planned.

Organisers were delighted when at least 180 people came to the event at Patcham Court Farm in Vale Avenue to hear from campaigners fighting the scheme.

One speaker on Sunday (31 July), Patcham resident Michael Howard, said that people in the area were grateful for Patcham Against Royal Mail for helping them object to the scheme.

In less than a fortnight more than 300 people lodged objections to a planning application for the site submitted by the Royal Mail. Three people have sent letters of support.

The planning application is for a new distribution office, parking, two electric substations and a vehicle maintenance facility.

Mr Howard said: “I’ve had people stop me in the street. They are so grateful that we’ve got together to try to stop this.

“It’s a lot of brilliant teamwork. The feeling is there is a huge amount of concern but we are positive we are going to stop this.

“People are volunteering to help. A couple of guys who have an allotment are filming the bats. There are bats nesting up there and slow worms all over the place.”

Other speakers on the day included Rebecca Kimber, who set up a website and Facebook group to bring campaigners together, David Harris, who has extensive knowledge of the area’s water systems, and environmental solicitor Bronte Ansell.

Mr Howard also praised two volunteers who have delivered leaflets across the area to raise awareness.

Among people’s concerns are the effects on wildlife and chemical contamination on the site mentioned in previous planning applications, including from oil drums and dust from collapsed asbestos roofs.

Mr Howard is working his way through details from a park and ride planning application in 2005 to support the case against the current proposals.

He said: “The parking is horrendous but the water system, the aquifers, have been ignored. The water from here goes to Peacehaven.

“If they contaminate the aquifers, that’s damaging to the whole of Brighton. The planning application has ignored the huge concern about asbestos on the site. 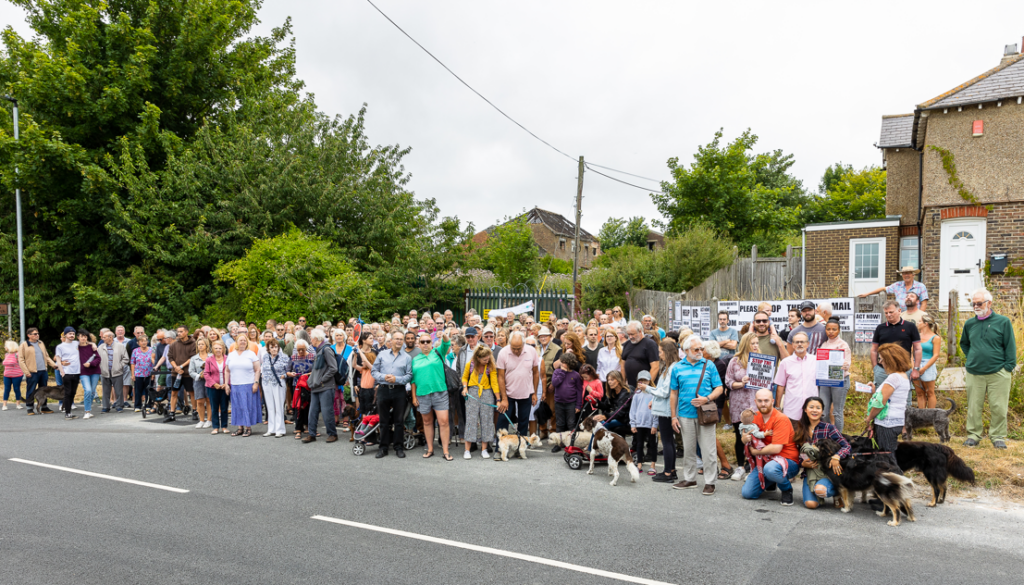 A Brighton and Hove City Council committee, made up of senior councillors, had been due to decide whether to grant a long lease to the Royal Mail last Friday (29 July).

But a report on the council-owned site was withdrawn before the start of the Policy and Resources Committee meeting so that councillors could receive more information about the proposals.

A second public meeting is proposed at All Saints Church, in Patcham, for Sunday (7 August) at a time to be confirmed on the Patcham Against Royal Mail website and Facebook group.