Heads up for better schools in Brighton and Hove

How long does it take to turn around a school? And can it be done in isolation? Or can it only happen if the community changes too?

These are live issues in Brighton and Hove where school performance has come in for significant scrutiny, particularly at secondary level, over the past few years.

BACA has new £28 million premises and PACA’s Chalky Road site has been undergoing a £12m revamp.

PACA has a relatively new head in James Fox and at BACA Dylan Davies took over the top job at the start of last month.

One of the new ways of working involves forming partnerships. Many in public life in Brighton and Hove regard partnerships as an important strand in our local DNA.

In school circles, they tend to involve the head of an outstanding or good school mentoring the head of a school that requires improvement or is inadequate.

The head providing mentoring and support sometimes becomes the executive head of both schools in the partnership.

She recently learnt that Hangleton Infants had maintained its outstanding rating in the eyes of Ofsted, the official education watchdog.

The achievement is particularly impressive because at the same time Mrs Lake has helped lead Benfield out of special measures after its inadequate rating by Ofsted.

Some are wondering whether Mrs Lake may be the person to convert Hangleton Infants and Hangleton Junior School into an all-through primary as has happened elsewhere in Brighton and Hove. The junior school has performed less well, according to Ofsted.

Another local example is attracting attention from far beyond Brighton and Hove.

West Blatch has traditionally been one of the feeder schools for Hove Park. The secondary and primary partnership – also described as cross-phase collaboration – is still relatively unusual. It started in the early summer last year and has already earned plaudits.

When West Blatch was inspected almost exactly a year ago, Ofsted said that it required improvement. Until recently the term used by the official watchdog was “satisfactory”.

That was not good enough for Rachel Simmonds, previously the school’s deputy head. 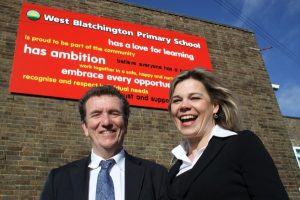 Ofsted acknowledged some of the difficulties at the school – another one where an infant and junior school had been combined.

Ofsted said: “The school is larger than the average-sized primary school.

“The proportion of pupils in receipt of the pupil premium (additional government funding for pupils known to be eligible for free school meals, service families and children in local authority care) is above the national average.

“The proportion of pupils supported through school action, school action plus, or who have a statement of special educational needs is above average.

“The proportion of pupils from minority ethnic groups and those who speak English as an additional language is above average and increasing. There are no predominant groups.”

“In fact 49 per cent of pupils are from a minority ethnic group and the school’s 360 pupils speak 22 languages.

In some classes as many as 65 per cent of the children are not native English speakers, adding to the challenge for teachers and teaching assistants. Quite a few arrive at the school without any English.

With the backing of her governors she turned to Mr Trimmer who has transformed Hove Park since he arrived in May 2011.

She said: “One of the reasons for approaching Derek was to see how we could improve more quickly.

“The school was undoubtedly strengthening but to accelerate the process I knew we needed to improve our structure, our systems and our support network. Hove Park has been on a similar journey.”

Hove Park has helped West Blatch introduce iPads, initially for pupils in Year 5 and 6. It has made its “Forest School” at Plumpton available for the youngsters from West Blatch.

Year 10 pupils from Hove Park are now acting as reading mentors and behaviour prefects at the primary school – “not because our behaviour’s poor!”

Ms Simmonds said: “We’ve linked up subject leaders across the school. Our curriculum is stronger. Most importantly our students are benefiting.”

She added: “We’ve got the same values.” Perhaps this is in part down to the fact that they share a remarkably similar background.

Both come from Brentford – in the part of London that was then known as Middlesex – and both have a working class London Irish background. They even studied at the same teacher training college.

When Ofsted returned, it was positive about progress. The inspector said: “A decision has recently been taken to enter into a partnership with Hove Park School.

“As a consequence of this partnership arrangement the governing body will no longer be seeking to appoint a head teacher but will have a head of school, accountable to the executive head teacher who will be the current head teacher of Hove Park School.”

The inspector wrote to Ms Simmonds: “The school continues to improve. You and your senior team know precisely what needs to be done in order to secure good achievement across the school and you have some good systems in place already.

“You and your team champion improvement and show high levels of commitment, energy and resilience.”

Mr Trimmer said: “This is a school that’s on the way up. It’s ambitious. It’s driven.”

Although neither he or Ms Simmonds would describe themselves as practising Catholics, he spoke about a moral purpose which they shared.

Ms Simmonds added: “Other heads are watching this space to see whether this is a blueprint which could be repeated elsewhere.”