Three people living in the shipping container homes in Brighton have spoken about their first six months living in Richardson’s Yard.

The interviews were published by Brighton Housing Trust (BHT) which came up with the scheme in New England Road, close to Preston Circus.

One of the 36 formerly homeless people living at the site, Phoenix, said: “It’s been really good. It was quite challenging to adjust to to start with. When we first moved in, the furniture was still being put together.

“The space is so unique that it was a bit difficult to try and figure out where the bedroom would go etc.

“I have settled in really well now. It has been a bit cold, because I guess, at the end of the day, I am living in a 40ft square box and it can be a bit cold.

“We have had some problems with the heating and so I have bought a new heater with a timer.

“It’s also taken some time to get used to the electricity because it was running out really quickly.

“It’s just lots of tweaks and adjustments. But living up in the fifth floor is amazing. The light comes through so that heats this flat up really well.

“Everyone is really friendly here. We don’t talk as much as we probably should but we have that neighbourhood thing where everyone says hello.

“I think there were some problems at the start where people were having parties but it has gone really well.”

He had a few reservations about moving into Richardson’s Yard. He said: “I was a little concerned but also excited.

“I was concerned because it seemed to be taking a long time to get them finished and the moving date was moved. I was wondering what I was coming into.

“I knew fairly early on that I would be living on the top floor and that was great because I don’t think I would want to be any further down. I like being up high and having the quiet.

“I knew we would get a lot of interest from the press and I had some reservations about the slant that the media used that Richardson’s Yard was a place for the homeless. 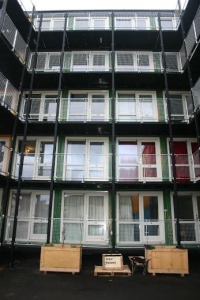 “It seemed to have a negative slant and it seemed that local residents were a bit adverse to it. But now it seems to be the complete opposite and people are really positive about it. It’s been a really good experience.

“I was in a private housing association in Kemp Town which was interesting and challenging in its own way because the people you live with came with problems of their own.

“I was there for 10 months. There were support workers on hand to help us. It’s nice now to have my own space because in the old place we shared a kitchen and a bathroom which I found difficult.

“You can stay at Richardson’s Yard for up to two years.

“The ultimate plan is to save a deposit and a month’s rent so that I can move into my own place. The centre of Brighton is too expensive so I plan to move to the fringes of town.

“Because I work, the rent here is more expensive than I anticipated and I am finding it quite hard to budget but it’s good to have the two years here so I don’t feel like I have to panic. As long as I am putting away little bits then I will be fine.

“Having my own space has been amazing. I have suffered with generalised anxiety for most of my life and I get very nervous in situations and I think being here and having my own space and having the sun beaming through my windows has really helped to relieve the tension and the stress which has branched out into other areas of my life like my work life and my relationship with my mum.

“It’s like a ripple effect. This has been the pebble and the ripples have come into other areas of my life.” 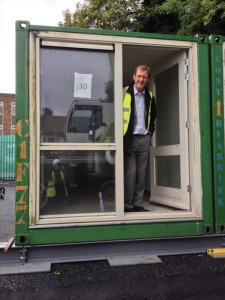 Andy Winter inspects one of the original Brighton shipping containers

Another resident, Tristan, has had highs and lows during his time so far at Richardson’s Yard. He has a new-found passion for cooking and inviting his neighbours round for meals in the evening after dropping his daughter back home.

He said: “It’s been really good. It’s been nice being able to pick herbs from out of the front and put it in your cooking in the evening.

“I have met some nice people. I had my neighbour over for dinner last night.

“The location is great and you can get to everywhere easily. Town is just a short walk away and the train station.

“The space is really big and I can have my daughter in here and even if it is lashing down with rain she can tear around and it’s not too noisy. I like it.

“Everyone says hello to each other but I thought people would help each other out more and be more thoughtful.

“I hoped there would be book clubs and things like that but I think this will happen in time.

“I think a lot of people are getting into the gardening idea that is happening here and hopefully that will bring people together more.

“I lived in Hove with a landlord and I assumed I had the same rights as a tenant but it turns out that because I lived with the landlord as a lodger I had less rights and I could be evicted without any notice or reason.

“I went to Brighton Housing Trust about it and they said I had no rights but they had places available here at Richardson’s Yard.

“I stayed with a friend for a few months while I attended their (BHT) workshops and built up my portfolio and then managed to secure a place here.

“The flat is lovely and it is a lot better than staying on someone’s sofa. You aren’t encroaching on anybody and you have all the essentials you need to get by such as a bed and a sink, central heating and a fridge but it’s not a home.

“You couldn’t turn this into a home where you could have lots of friends over. There isn’t enough space and you only have one worktop for draining and cooking and prep.

“It’s a great idea because you don’t want people to stay for too long. It’s a short-term solution and it’s great for that. I will use this and get the best out of it but it also gives me a reason to plan my next move.

“I want to move into a housing co-op where the rent is cheap and everyone works together as a community. 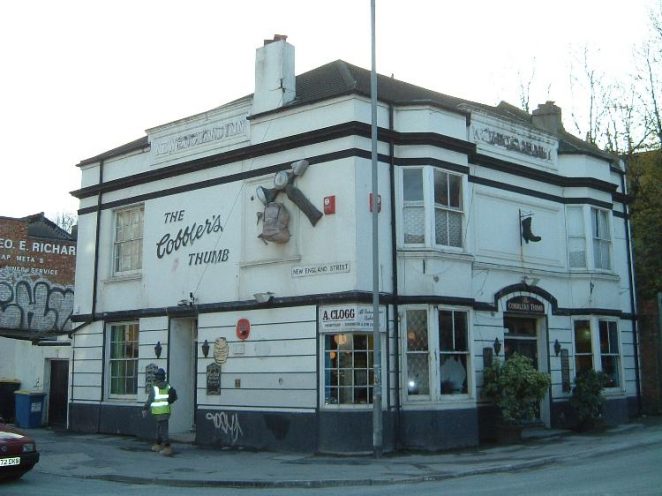 The Cobbler’s Thumb, formerly the New England Inn, was demolished and the site is now occupied by shipping containers converted into temporary homes

“I have never lived on my own since leaving my parents’ home before so that has been quite an experience.

“I have always been quite sociable and lived in shared houses. Living on your own has been quite isolating but that is good in its own way. It has encouraged me to meet my neighbours.

“Living at Richardson’s Yard has been a really great experience. I have really enjoyed it.”

A third resident, Alan, lived in supported accommodation and hostels before he moved to Richardson’s Yard four months ago. He said it was “brilliant but also a bit weird”.

Alan said: “I have come from supported housing so the things that I enjoy such as living independently are also a bit weird because I am used to lots of people being around and it’s hard to adjust to being on my own. That’s the strange part of being here.

“I am used to having seven or eight people around, sort of barging in and making a nuisance of themselves which I had got used to but now I don’t I really like it and I am enjoying the space but it is strange. So far it’s brilliant, touch wood!”

He said that he had reservations before moving in, saying: “I hated the idea of living in a shipping container.

“As soon as the idea was mentioned to me and there was the possibility of me being put forward to live here I thought there is no way you are putting me in a box and it took ages to come around to the idea.

“I don’t think it was until the second workshop that Steve Coulson ran that I started to think hang on a minute. This is pretty good.

“I started to look at the plans and on the internet at projects in Holland and my enthusiasm really grew. I am going to reapply for the council and hopefully get a band B.

“In the mean time I am playing off my debts and saving for private accommodation in case I can’t get housed by the council.

“Anyone who has been homeless or in supported housing or hostels knows that you just want your own space.

“Often people in this position aren’t actually ready for their own space and I wasn’t. But at the time it is all you want.

“When they said it would be a two-year stop-gap period I wasn’t that keen but having thought about it, it’s actually a good opportunity to get myself sorted and to pay my debts off.

“I can save up. I can start living properly without all this weight on my shoulders. Hopefully, once I have saved enough, I will have a year to find somewhere new to live.

“I have depression and post-traumatic stress disorder and I realise they really need sorting out.

“I was drinking heavily before I came here and I have stopped that now. But living on your own, sitting with my own thoughts without any distractions can be challenging so on a personal level I realise I need help in those areas.