Eight people arrested over the stabbing of a man in Pavilion Gardens on Saturday have been released on police bail.

The gardens were cordoned off by the entrance to Brighton Museum on Saturday while forensic officers combed the area.

It followed a fight at5.40am morning when three local men walking through the gardens were set upon by a large group of teenagers in the vicinity of the cafe.

One of the men sustained a puncture wound to his back, thought to be caused by a knife.

He has received hospital treatment for the injury and been released.

Police are appealing for witnesses who may have been in the gardens at that time.

Detective sergeant Simon Dunn said: “We are keen to speak to anyone in the area who witnessed the fight involving a number of people close to the museum entrance within the grounds of the gardens.

Five boys, two men and one girl have been arrested of a variety of offences including GBH and robbery. They have been bailed while investigations continue. 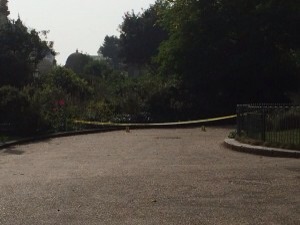