A Brighton pub fears it could become swamped with passing traffic if more of the Lanes are pedestrianised. 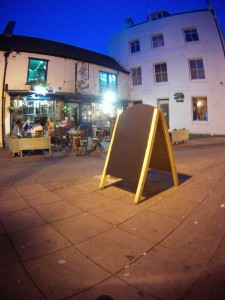 Northern Lights is tucked away in a quiet corner of Little East Street, but if plans to close East Street to traffic go through, cars, vans and lorries will instead be directed past their front door.

Pub owner Pauliina Talvensaari urged customers to object to the plans this month before the consultation period closed on September 10.

Now, they face a nailbiting wait to see whether the scheme will become a reality.

She said: “We’re pretty grumpy about the way in which this whole process has been handled.

“We don’t want to lose our quiet little hub in the corner here, we don’t want people coming out of Doctor Brightons to get squashed, and we don’t want those who sit outside our place to eat on a gentle Sunday afternoon to choke on exhaust fumes as another lorry driver realises that he has one hell of a tight corner to negotiate.

The plans involve stopping traffic coming into East Street between 11am and 7pm, with an access-only restriction at other hours.

Following a public inquiry into the original proposals when they were made last year, the council has redesigned the layout of Little East Street, where a no traffic order will be lifted, and carried out a road safety audit.

A council spokesman said: “The scheme has been assessed by an independent safety auditor who has deemed it low risk.

“There will be one extra car a minute through the street between the hours of 11am and 7pm. There will be a lorry ban after 11am until midnight as well.

“There has been a great deal of consultation with traders including one-to-one meetings with them – and we’ve changed the plan as a result. That includes installing speed bumps.

“The council has to take all opinions into account. Traders have been campaigning for pedestrianisation of East Street and the only viable alternative for vehicles is Little East Street.

“Councillors will decide whether to press ahead at the environment, transport and sustainability committee on October 7, with a report about it published early next week.”