Brighton police have been given special powers to break up violent, drunk or rowdy groups in the city centre following the stabbing of a man in Pavilion Gardens this month. 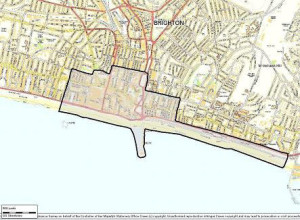 The dispersal order, known as a section 30 order, will run until October 20 and allow police officers and PCSOs to make groups of two or more people, who are causing significant and persistent anti-social behaviour, to leave the area and not return for up to 24 hours.

It was granted after a Brighton man was stabbed in the back in Pavilion Gardens on September 20 after being set upon by a large group of teenagers.

Police will not necessarily disperse people in the designated area just because they are in a group, it is aimed at giving police additional powers to deal more effectively with groups who decide to cause problems.

Sergeant Dave Palmer, of the Neighbourhood Policing Team, said: “This dispersal zone will help us to combat anti-social behaviour where large groups of people are setting out to cause problems and commit crimes in the area.

“It is not designed to target residents or visitors, but is to make the area more pleasant for those who live, work and visit.”

“It will help the immediate problems anti-social behaviour can cause and help stop any intimidation, violence, drinking, drug taking, fights, noise or urinating.”

Eight people – five men, two boys and a girl – have been arrested on a variety of offences including GBH and robbery in relation to the Pavilion Gardens incident. They have been bailed while investigations continue.