Two Mile Oak mums took their concerns about their local playground to the national stage this week when they appeared at the Labour Party Conference. 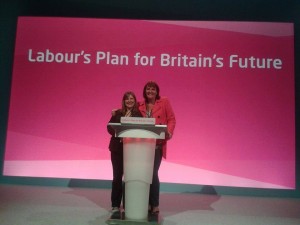 Natalie and Tiffany at the conference

Natalie Downes and Tiffany Soams were invited to the conference after meeting shadow cabinet office minister Jon Ashworth and shadow minister for women and equalities Gloria de Piero when they visited the city earlier this summer.

They spoke of their campaign to get better playground equipment for the Mile Oak Rec, which they say has been neglected while other city playgrounds have ample funds spent on refurbishment.

The pair were taken to the conference by Labour’s parliamentary candidate for Hove, Peter Kyle. He said: “Local parents are frustrated that their children are forced to use such terrible equipment whilst other parts of town are lavished with up to three times the amount of investment in parks.

“But what turns their frustration into anger is being constantly ignored by the council administration. No one likes being ignored and parents at the Rec tell me it’s like shouting into the wind trying to get the Greens to listen.

“The sight of Natalie and Tiffany there on the main stage with a full audetorium for the opening session of conference was amazing. In fact, they were amazing! Finally here they were, able to stand in front of thousands of people and the media and tell them what it’s like to live in a part of Brighton and Hove where underinvestment and council neglect is the norm and where the council leader, Jason Kitcat, finds it acceptable to ignore an invitation to meet with parents and see for himself their concerns.”

However Mr Kitcat disputed the assertion the area had been neglected.

“I’m not aware of the invitation he refers to and of course I would be happy to discuss the issues raised further. However its worth noting that I have recently written in great detail to Mr Kyle about those Mile Oak issues.

“Mr Kyle’s claims of ‘underinvestment’ and ‘neglect’ are simply not true. Since 2011 the Green administration has brought in over £57 million in new outside funding to improve our city.

“Only the Labour group of councillors has been consistently saying ‘no’ to these bids and new projects that are regenerating the city for all to benefit.

“With Labour’s Ed Balls committed to matching Osborne’s austerity measures our city council is set to see huge budget cuts until 2020 regardless of whether Labour or Tories win the next election. Why won’t Mr Kyle address that sad reality for the future of our local public services?”