The proposed pedestrianisation of East Street has been backed by restaurants who say it will boost business in the area. 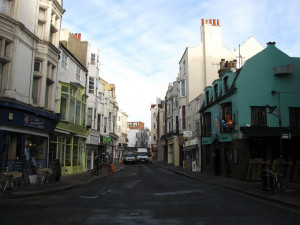 But today, a group of East Street restaurants have submitted a statement in favour of the plans, which they will present to Brighton and Hove City Council’s Environment, Transport and Sustainability Committee when it considers the plans on Tuesday.

The group is led by Olivia Reid, of Terre a Terre, who says: “I believe the proposal we are discussing today has the potential to change the atmosphere in the area which is desperately needed.

“We need brighter more open streets where visibility and transparency will assist crime prevention, where business owners alongside residents will take responsibility for their surrounding area and its potential  growth and improvement.”

Her statement, which can be read in full here, is backed by VBites, Moshimo, Scoop and Crumb and Indian Summer, as well as Shoshana Plail, of the Child Friendly Brighton website.

The council report addresses the issues affecting Northern Lights, which were raised by a planning inspector who ruled on a previous version of the plans. It allows for beer deliveries to the pub and nearby Dr Brighton’s.

The plans now include measures such as speed humps, safety railings and passing points, and said a revised traffic survey showed the impact on the pub was not as great as originally stated.

Deputy council leader and lead member for transport Councillor Ian Davey said: “There is clearly a slight detrimental effect on a small number of premises in Little East Street – but a very large positive impact on a greater number in East Street. So it’s logical to press ahead to bring the greatest benefits to the greatest numbers.

“However, I’m really hopeful that Little East Street will eventually gain some new benefits as the Old Town area becomes more vibrant – in the same way the North Laine gained so much from pedestrianisation.”

East Street is one of the oldest roads in Brighton and one of the busiest pedestrian routes in the city with up to 20,000 people walking it per day in peak times.

If a final go-ahead is given by councillors, it is expected that East Street will be pedestrianised by the end of November, with no access for vehicles between 11am and 7pm daily.

Ship Street has already been closed to vehicles at the junction with North Street.