Flood of calls for Brighton and Hove fire crews after downpour

Fire crews in Brighton and Hove received a flood of 999 calls as a heavy downpour drenched the area this morning (Wednesday 8 October).

East Sussex Fire and Rescue Service said that the control room was particularly busy at about 8.30am.

Crews attended several incidents including one in Preston Village Mews, in Brighton, where a storm drain became blocked and flooded all of the surrounding houses.

Firefighters unblocked the drain and this resolved the main issue.

Crews from Hove, Brighton and Roedean fire stations all attended flooding calls during this time.

Only hours earlier Councillor Alan Robins raised the matter of blocked drains and gullies at a Brighton and Hove City Council meeting. 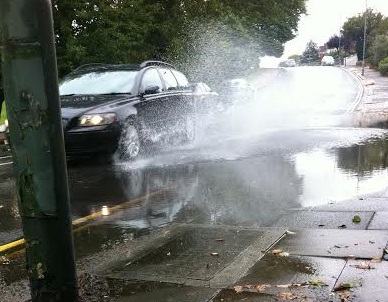 He told the Environment, Transport and Sustainability Committee meeting at Hove Town Hall yesterday (Tuesday 7 October) that he had pictures of grass growing out of some.

He wrote to council chief executive Penny Thompson after the storms and rainfall on Monday 28 July.

But he said: “I was disappointed to that the leader of the council was so quick in denying that the subsequent floods in Portslade were caused by several gullies and drains being blocked.”

He said that he had been looking into the issue of blocked drains and gullies across South Portslade for a number of people living in the ward in the weeks leading up to the storm.

At the committee meeting yesterday he said: “Apparently these drains are checked once a year.

“If a car is parked covering it, it’s left and they try once more. Then it’s left.”

Committee chairman Councillor Pete West said that the weather on Monday 28 July had been exceptional.

He said: “Many premises were flooded including our own offices. It exceeded the once in a hundred years event.

“Fifty to 100mm of rain fell in three hours which was more than the entire average rainfall for the whole of July.

“The drains aren’t designed for that level of water. Their effectiveness is, of course, affected if they’re covered with leaves.

“There are 20,000 gullies across the city which are cleared every 12 months by our contractor.”

Councillor Robins suggested putting out notices in advance to prevent parking on the day that the contractors are due in any given street as happens with other services such as tree pruning.

Today weather forecasters predicted a further 5mm of rain in the next 48 hours, adding to the 20mm to 30mm that has fallen over the past few days.

Wind speeds are expected to return to between 20mph and 30mph tomorrow, with gusts like today of between 30mph and 40mph.