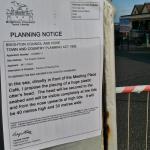 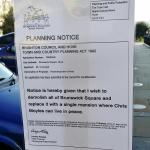 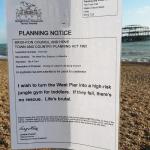 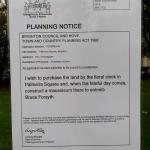 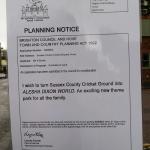 A series of spoof planning notices have appeared around Brighton and Hove promising new attractions such as turning the cricket ground into a theme park called Alesha Dixon World.

The joke laminated A4 notices also advertise a proposed “huge plastic otter’s head” – 40 metres high and 30 metres wide – to be embedded in the sea by the Meeting Place Café.

Another talks of demolishing Brunswick Square and replacing it “with a single mansion where Chris Moyles can live in peace”.

A fourth – described as a change of usage for a decaying structure – suggests that the West Pier become a jungle gym for toddlers with no rescue if they fall.

And a fifth spoof advert talks of turning land by the floral clock in Palmeira Square into a mausoleum to entomb Bruce Forsyth “when the fateful day comes”.

Pictures of the spoof planning notices have been posted on the Poke website.

Each says that appeals will be sent to the TV presenter Eamonn Holmes, adding: “There will be no further opportunity to comment at this appeal stage until he has spoken to his wife Ruth.”

One passer-by who was chuckling at one of the notices said: “Someone’s got too much time on their hands.”

Another said: “It says the otter’s head will be a pleasing folly but we’ve already got a few of those going through, haven’t we!”