The new manager of Brighton and Hove Albion said that the club’s fans could continue to expect his side to play a brand of free-flowing attacking football.

Chris Hughton told a press conference yesterday morning (Wednesday 31 December) about the importance of getting the right results while ensuring that the fans were entertained by the football on show.

He said: “There has been talk about using a different style of play and I’m very conscious that there has been a very expansive possession-based way of playing here over the last five years or so under three different managers.

“In some cases this is predominantly a 4-3-3 system and it would be wrong for me to change that completely.

“I generally tend to play more of a 4-4-1-1 system or a 4-2-3-1 system which in itself is possession-based and has a lot of the same philosophies as what we’ve had in the past but is possibly not as expansive as what has been here before so it’s important to get that right balance. 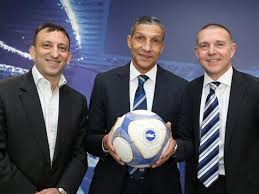 “You want to play winning football, want the supporters to enjoy what they’re seeing and have a good structure to the team. That’s the job I have over this period of this time.”

The Albion website said that the 56-year-old had an impressive track record in the Championship.

He guided Newcastle to an immediate return to the Premier League and led Birmingham to a respectable fourth in the 2011-12 season.

He admits that clear similarities and differences can be made regarding the job he is about to undertake at Falmer compared with his previous clubs.

“The biggest difference compared to both of those campaigns was that I took the side from the start of the season.

“So you had a summer period, a pre-season campaign and the summer transfer window to prepare yourself for the season.

“Now I’m coming in at a different time, halfway through the campaign, which means I’ve got to get to know the players fairly quickly.

“But there are some similarities. I very much see Brighton as a big club and one that I’ve known well for many years and had some really tough battles against them, so the challenge is similar in that respect.”

Hughton said that key priorities during a rapid settling-in process would be to build up a rapport with the players and ensure the team continued the recent upturn in form.

He said: “Of course I have the experiences of taking two teams in the Championship and I’d like to think I’ve done fairly well with those clubs.

“But now it’s all about getting to know the players as quickly as I can because you want to hit the ground running.

“From what I’ve heard of the group we have here, irrespective of the results, is that the general atmosphere in the training camp has been very good and there are a great group of lads that want to learn and develop.