Do you recognise any of those present when a 28-year-old man from Hove was stabbed in Brighton at the weekend?

The stabbing happened in St James’s Street, near the Bulldog pub and the corner of Camelford Street, between 6.30am and 7am on Saturday (10 January). 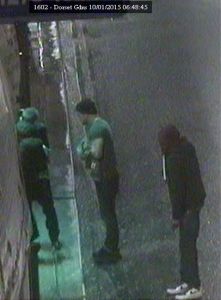 The victim was stabbed in the abdomen. He was taken to the Royal Sussex County Hospital, in Kemp Town, where he underwent surgery. He was described as being in a stable condition.

Detective Constable Leonie White, of Brighton and Hove CID, said: “We want to talk to witnesses to the stabbing, in particular the man in the beany-style hat pictured who was in the area at the time.

“He is not a suspect but we believe he may be able to help us.

“The victim was possibly within a large group of men.

“If you are a witness, saw this group or saw members running away from the scene please contact us.”

Anyone who recognises any of those pictured is asked to phone Sussex Police on 101, email 101@sussex.pnn.police.uk or call the charity Crimestoppers anonymously on 0800 555111.