The Brighton and Hove Independent is to hold a public meeting and referendum on the council tax over the coming month.

A public meeting has been organised for Tuesday 27 January. It will take place as politicians locally decide whether to put up the council tax and, if so, by how much.

The minority Green administration wants a 5.9 per cent rise. This would trigger a referendum on the same day as the general and local elections – Thursday 7 May.

Labour wants a rise of about 1.9 per cent – just below the threshold that triggers a referendum.

And the Conservatives want a freeze. The coalition government has given extra money to councils for freezing council tax levels but critics argue that this has only short-term financial benefits. 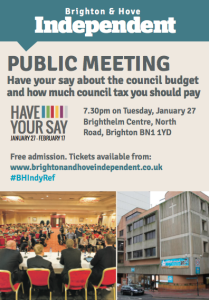 Brighton and Hove City Council is looking for savings of up to £26 million in the year ahead in a budget totalling roughly £750 million.

But much of the budget is ring-fenced. For example, almost all the money for schools has to be passed on. The council effectively acts as the government’s distributor or administrator.

The Brighton and Hove Independent said: “Our city is facing a crisis: a time when difficult and important decisions have to be made.

“In addition, decisions that will have long-lasting implications will be made by a council that has only two or three months to run – before the city council elections and the general election on Thursday 7 May.

“Even then, it is entirely possible – even probable – that no party will be entrusted with a majority, for another four years.

“By which time, government funding will have fallen from £103 million to just £39 million. And the funding gap will have increased from £26 million to £102 million.

“As things stand, crucial decisions will be taken in our name by politicians who are likely to be focused more on short-term political advantage than on the long-term interests of the city.

“Indeed, up to one in three councillors voting on next year’s council budget will actually be standing down (in May).

“The Brighton and Hove Independent’s citywide referendum will provide a unique opportunity to influence these crucial decisions before it’s too late.

“We will invite readers to have their say in print, online and at public meetings.”

Details of the referendum will be published in the free weekly newspaper, along with voting cards.

The public meeting on Tuesday 27 January s due to start at 7.30pm at the Brighthelm Centre, in North Road, Brighton.

Admission is free but by ticket only. For tickets, click here.