Tests are to be carried out on the new Vogue Gyratory cycle lane after riders fell off their bikes shortly after the scheme opened. 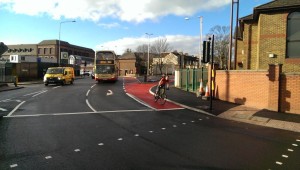 A section of the Vogue Gyratory Improvement Scheme, opened in December 2014, included a standard half-height kerb, designed to deter vehicle drivers from cutting up cyclists on a corner.

But within days, several cyclists had fallen foul of the kerb, crashing off their bikes and in some cases, injuring themselves.

One of the first casualties was Cara Courage, who came off her bike on December 11, before the lane was officially opened.

She was left with concussion, face and leg cuts and bruises and now scarring, bone damage and still has a lack of mobility in one hand which may be permanent.

She said: “There had been problems along the Lewes Road for everyone, and I was pleased to hear they were making these improvements.

“Now they’re finished, it’s fantastic cycling through it to Sainsbury’s, but once you get to the traffic lights past the BP garage it feels very confused and nobody seems to know what to do. Speaking to other cyclists, everyone just thinks it’s a bit of a mess.

“I hope that the council can learn from this and look at how people are using this space – but it is a bottleneck so they’re limited in space for what they can do. ”

She added Brighton and Hove City Council had approached her through Twitter to put her in contact with their insurance company and had been very apologetic.

The council says kerbs like the one used in the cycle lane are common and have been used on cycle schemes elsewhere in the UK, including on the city’s Old Shoreham Road cycle lane constructed in 2012.

After it became aware of the accidents, it installed a temporary shallow tarmac ramp to create a smooth transition from the road surface to the cycle lane and there have been no incidents reported since.

Whilst it would be possible to simply remove the kerb and have a cycle lane flush with the road, transport officers are concerned that without the kerb, traffic will again start encroaching onto the cycle lane, endangering cyclists. Now observations will be carried out to see what happens without the cycle lane having a raised surface.

This means carrying out works to remove the raised section and kerb to see whether the red coloured surfacing and a solid white line are sufficient to keep vehicles clear. If not, a bespoke kerb would be designed meaning bikes could transition smoothly from the road to a raised cycle lane from the side. Work to remove the raised section was done on Sunday (January 25), during off-peak periods.

Lead councillor for transport Ian Davey said: “Generally the Vogue is demonstrably safer for bikes and has been well-received by cyclists.

“Although these kerbs are common, we’ve had this unexpected situation of a few cyclists apparently entering the bike lane from the side and failing to see the kerb.

“But the arrangement has to be easy to understand and safe for everyone so we need to test whether a cycle lane flush with the road keeps cyclists safe from vehicles or whether we need a kerb of some sort which bikes won’t trip over.”

Brighton and Hove is best for breastfeeding