Staff from a Brighton call centre have raised more than £1,000 for the British Heart Foundation.

They joined thousands of people across the country in wearing red in support of the charity’s campaign to “Wear it. Beat it.” 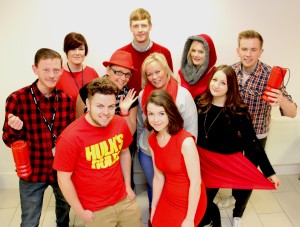 The money raised by the campaign will be used to fund research into heart and circulatory disease, which kills 250,000 people a year in Britain.

At the Domestic and General (D&G) call centre in Queen Square, Brighton, about 400 staff turned up to work wearing red and donated at least £1.

HR manager Nicki Perry said: “As well as raising money for a good cause, the campaign is helping us increase awareness of the causes of heart and circulatory conditions among our workforce, which of course we fully support.

“People often overlook the risks to heart health that certain lifestyle choices can have. Unfortunately this is a huge risk considering heart disease affects so many people.”