It’s been a mixed week for Norman Cook. On Wednesday, he was given a top honour from his alma mater the University of Brighton. 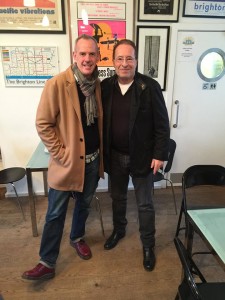 Mr Cook, better known as DJ and music producer Fatboy Slim, was awarded the university’s Alumnus Award 2015 for his major contribution to the music industry and his ongoing support for the university.

But the same day, he was warned that a body was set to be discovered buried under the path to his Beach Big Cafe by Hove Lagoon – albeit a fictional one.

The warning was given by bestselling author of the Brighton-based Roy Grace novels, Peter James, who popped in to give the musician a heads up about his new book.

Posting on Facebook, he said: “So what were lovely Norman Cook (aka Fatboy Slim) and I cooking up yesterday in his Big Beach Cafe?

“Could it just be that human skeletal remains are about to be dug up from under the path right outside his cafe?

“I was breaking the news to him gently that this might just be what happens early in my next Roy Grace novel, You Are Dead (out May 21st).

“He took it very stoically, then got nervous, wondering if I’ve made him the prime suspect… Now that would be telling…”

A student at what was then Brighton Polytechnic, Norman achieved a BA in British Studies before setting out on his music career and ultimately becoming one of the world’s best known DJs.

He said his degree gave him the confidence to pursue his dream “with wild abandon because I figured if it did go tits up I could fall back on my degree later in life and get a proper job”.

He went on: “For those of you graduating this is the day that you stop following orders from others and embark on your own dreams.”

After failing two out of three of his A levels Norman’s parents said they would support him all the time he was in full time education “or I could leave home and get a job there and then. This was kinda the incentive I needed to re-take my A levels and apply for a degree course at Brighton University.

“I have always had the utmost love and respect for my mum and dad for leaning on me because some very good things happened as a result: I ended up living in Brighton, a city which I very quickly grew to love and which has been my home in the 33 years since and I managed to pass my degree.

“So what is the point in me telling you all this, you ask? Well I guess what I am trying to say is once you¹ve done the hard work and have those important letters after your name the pressure is off now to a certain extent.

“Those letters will be after your name for the rest of your life if you need them to impress people but your dreams have been sitting around for a long time now waiting for you to fight your way through puberty, parental influence and higher education.

“Maybe as you celebrate your freedom you can just see if there are any other dreams lying around in your head that you may want to have a crack at?

“Maybe something that has been lurking there for years whilst you¹ve been knee-deep in dissertations.”

“I have never actually used those letters after my name but the process of earning them got me where I am.

Sam Davies, the university’s Director of Philanthropy and Alumni Engagement, told the audience: “Norman always knew that music was his goal, but his parents made it clear they wanted him to have a fall-back position if the music career didn’t work.

“So before he could run away to join the ‘circus’ – as he describes it – of the music industry, he threw himself into his studies and says his degree is the thing he worked hardest for in his life.

“He also says it taught him the importance of sticking with something and remains very proud of his 2.1.”