Labour’s pink bus, which is touring the UK to encourage women to vote, was at the Open Cafe in Rottingdean today. 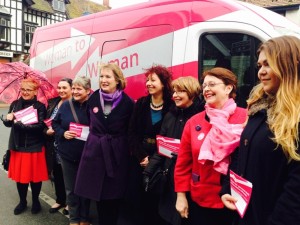 The bus, the centrepiece of the party’s Woman to Woman campaign,  will also shadow ministers and other party members around the country to talk to women at “the school gate and the shopping centre as well as colleges, offices and factories”.

Nancy Platts, Labour parliamentary candidate from Brighton Kemptown and Peacehaven said
“Harriet Harman’s Woman to Woman tour has been a great opportunity to get together with lots of women in Rottingdean and learn more about their concerns and their hopes for the future.

“We spoke with a range of women from different background, to young mums about childcare and the NHS and businesswomen about what Labour can do for small businesses.

“If elected as the MP for Brighton Kemptown and Peacehaven, it would be an honour to be the first women to represent this constituency and I will ensure that women’s voices are heard in Parliament.”

Harriet Harman Deputy Leader said: “The Open Art Cafe was an ideal place for Nancy Platts and I to meet women to discuss their concerns.

“We chatted to women who did vote and those who had never voted. What came over very clearly is the importance of having Nancy in Parliament – someone who left school at 18 and who is the opposite of a ‘professional politician'”

When the bus was first announced, it divided opinion, with some praising the party for taking the female vote seriously and others dismissing it as patronising.