Organisers of a campaign to save the Preston Park Velodrome are to stage a slow-ride around the track to raise awareness.

The ride, which is billed as the first of many, will take place on Saturday, 28 February at 11am.

The velodrome has been closed for racing since mid-January after British Cycling said it was too dangerous to use for competitive events.

Within hours, a campaign had been launched, and less than a month later, a petition urging Brighton and Hove City Council to make repairs has now got 3,164 signatures. 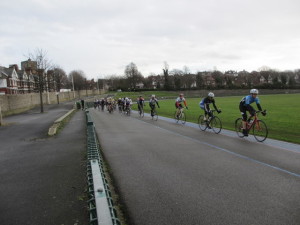 Campaigner Kim Fortescue Talwar said: “It’s brilliant to see so much support for the Velodrome, and an raised awareness of the risk of losing competitive cycling at Preston Park’s historic track is important in ensuring that the council is aware of, and acts on, the concerns of the cycling community.

“Since the launch of the petition, the council and British Cycling have had further meetings to discuss the repairs and costs involved, and agree a way forward for the work required. I am, however, unable to give you any further details of these costs at this time.

“The local cycling community, including Preston Park Youth Cycling Club, continue to be proactive in ensuring that a future is secured for Preston Park Velodrome and all cyclists in Brighton and the South East.”

A spokesman for British Cycling said: “British Cycling recognises the value of the Preston Park facility to local users and we are working with Brighton and Hove City Council to find a solution as quickly as possible.

“The track was closed to competitive cycling after users of the track identified, in particular, the fencing but also other aspects of the track as in need of repair.

“Some repairs were carried out by Brighton and Hove City Council but concerns remain about certain parts of the track where it is thought that safety may be compromised in competitive events.

“British Cycling has met with representatives from the council to discuss the work. They acknowledge there are still some challenges which need to be addressed and they have agreed they will to look into what will be required to bring the track up to standard.

“In the meantime, British Cycling has commissioned a condition survey of our own which will include an assessment of the cost to repair the fencing and carry out the remedial work required.

“Like the hundreds of people in the area who value the facility, we look forward to competitive cycling returning to Preston Park in the near future.”