Hopes are high that he will announce the final approval of the hospital’s modernisation plans.

When the outline business case was approved almost a year ago, the project was expected to cost £420 million. The Chancellor George Osborne came to the hospital to announce his approval in person.

Since then Brighton and Sussex University Hospitals NHS Trust, which runs the Royal Sussex, has been working on finalising the project proposal and the costings with the lead contractor Laing O’Rourke. 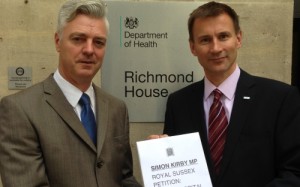 The total cost of the project, which will take eight years to complete, is now £480 million.

Simon Kirby, the Conservative MP for Brighton Kemptown, is expected to meet the Health Secretary when he arrives in Brighton tomorrow.

Mr Kirby said: “I have been busy lobbying both the Chancellor George Osborne and Health Secretary Jeremy Hunt to approve an additional £60 million for the redevelopment of the Royal Sussex County Hospital.

“I successfully campaigned in support of the hospital’s outline business case for £420 million, petitioning the Health Secretary, bringing the Chancellor to the hospital and raising the issue with the Prime Minister during PMQs (Prime Minister’s Questions).

“Following this campaign, the government approved this funding in May 2014.

“Subsequently the hospital has been working hard to finalise the proposal and is now requesting additional funding.

“I have been working hard to convince both the Treasury and the Department of Health that this further funding is absolutely necessary.
“This extra money will allow the local NHS Trust to commence work with complete certainty.

“I have made sure that both the Health Secretary and the Chancellor are acutely aware of how important this hospital is to everyone in Brighton and the surrounding area and the local desire for this additional funding to be approved as soon as possible and I look forward to welcoming the Health Secretary to the Royal Sussex.”