Horse and Groom was sold today

Contracts were today exchanged for the sale of the freehold of Brighton pub the Horse and Groom. 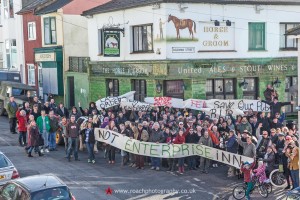 Scores gather to support the campaign to save the Horse and Groom on Sunday, February 8. Picture by www.roachphotography.co.uk

A campaign was started last month to get the pub listed as an asset of community value, which would have delayed any sale by six months and given residents a chance to bid for it.

But although Save the Groom group submitted its application three weeks ago, it has not yet been decided, which means the sale could proceed.

Landlord Pat Hennessy today said that it was his last official day in charge of the Islingword Road pub as the contracts had been exchanged this morning.

The pub has been sold by Enterprise Inns, which also sold the London Unity, the Albion Inn and the Rose Hill Tavern.

A spokesman said: “Unfortunately, trade at our venue The Horse and Groom has fallen considerably in recent years.

“Following the most recent publican’s decision to cease trading, we gave careful consideration to the pub’s position within our estate and decided to accept an offer on the freehold of the site, with no restrictions on future use. We can confirm that the sale completed at midday on Friday 27 February.”

The London Unity has been turned into two homes, the new owners of the Albion Inn and the Rose Hill Tavern are applying to turn them into housing.

However, the Rose Hill Tavern has been made an asset of community value, and a decision on the planning application has not yet been made despite being due in November.

An appeal by the new owner against the ACV was heard on 17 February, and a ruling is pending.

Ronnie Daye, of the Save the Groom campaign, said: “We’re still gathering support. We’ve had people contacting us from across the world, including musicians from as far away as Australia.

“Yes, it has been sold but we’ve taken legal advice and believe the council can step in and stop any redevelopment while our application for an ACV is decided.”

So far, almost 800 people have signed a petition urging Brighton’s two MPs Caroline Lucas and Simon Kirby and local government minister Eric Pickles urging them to help save the pub from closure.