Will Brighton Wheel’s struggle to attract visitors spell trouble for the i360?

The Brighton i360 says it is still confident hundreds of thousands of people will flock to it after it was revealed the Brighton Wheel has failed to attract as many visitors as it intended. 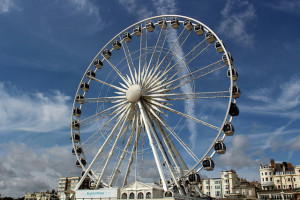 The Brighton Wheel has applied to stay open for another five years – and part of its argument is that it only attracted 186,000 visitors in its second year, compared to the 529,778 visits a year its original application predicted.

The Brighton i360 says it expects to attract up to 800,000 visitors a year – but says it has far more to offer than the Brighton Wheel.

However, it says if the Brighton Wheel is allowed to stay open, it will lose out on about quarter of its estimated visitors.

And it has called on the council to honour the clause in the Wheel’s lease which, it says, requires it to cease operation before the i360 opens – although the Wheel disputes this.

Eleanor Harris, CEO of Brighton i360, said, “Our business plan is based on two strands, the ride itself plus our visitor centre, which incorporates a conference centre, brasserie, tea rooms, event rooms and exhibition space, which are a very important part of our business and mean we are not just relying on ride ticket sales.

“With regards to the ride, there is a world of difference between the Brighton Wheel and the Brighton i360 experience.

“The i360 is three times higher and also a very exciting, modern and unique attraction whereas transportable wheels such as the Brighton Wheel have been in numerous cities up and down the country.

“Our research and independently assessed visitor figures are robust and we expect to attract between 700k and 800k visitors per year including up to an additional 350,000 visitors to Brighton each year – in the first year, it will be much higher.

“The wheel would put at risk circa 25% of these visitors and as ticket sales represent two thirds of our income, it is still a very important aspect and 1% of our ticket revenue flows straight back to the city as part of our Section 106 Agreement.

“We take repaying our loan via Brighton Council to the Public Works Loan Board and to the Coast to Capital LEP very seriously.

“On our current business plan projections we expect to repay the 27 year loan after 18 years. The management team who have invested £6m of theiw own money will not see any profits until after that date.

“Therefore the i360 team are working for the city and it is in the city’s interests for the i360 to succeed.

“Our funding agreement with the council, has always been based on there being no rival observation attraction in Brighton, so it would be harmful for the city if it stayed.”

However, Selma Montford of the Brighton Society said she the lack of visitors to the Brighton Wheel does not bode well for the i360.

She said: “I think the i360’s projected visitor estimates are wildly optimistic. If you ever look at the Wheel, and members of the Brighton Society have stood by it for a whole sunny day in the school holidays, even then it’s not full.

“The i360 is going to be more expensive. I think the visitor estimates is the weakest part of the i360’s application. I just don’t believe those figures.”

But architect and Brighton resident Paul Zara, director of Conran and Partners, has been a critic of the i360 in the past, but says he has now done a u-turn and is backing it all the way.

He said: “The Wheel is just a fairground ride, and every city has one. It’s not something to get excited about.

“I have been quite anti the i360, but I changed my mind recently. It’s going to happen and I think the city should get behind it and celebrate it and stop whinging.

“It’s going to be an amazing thing on the seafront – as high as the Gherkin and a national tourist attraction.

“Nobody comes down to Brighton just to go on the Wheel, but the i360 is in a different class.”

Planning consultant Ian Coomber, who is working closely with the Wheel on its application, said: “It’s a fundamental issue whenever you are looking at forecasts and statistics – how many times have they been proved wrong?

He said the wheel may seem empty, but its high profile spot on the seafront subjected it to a higher level of scrutiny than other city tourist attractions.

He added: “The Brighton Wheel supports the i360 and we’re absolutely surprised by their being so concerned about a wheel that’s a third of the height and a mile down the seafront.”

Mr Coomber also said the Wheel’s lease did not contain any explicit clause requiring it to shut before the i360 opened, but instead left open the possibility for renegotiation.

A council spokesman said its culture, recreation and tourism committee had approved the Wheel’s plans in December 2010 “on the strict understanding that there will be no concurrent operation of the wheel and the i360”.