The number of employers to have signed up for the Living Wage has topped 200, the Brighton and Hove Chamber of Commerce announced yesterday (Thursday 12 March).

The Martlets became the 200th to sign up, with more firms swiftly following suit. The Martlets, a local independent charity, provides end of life care to adults living in Brighton and Hove. The charity, which runs a hospice in Hove, has cared for more than 25,000 local people since 1997.

Robert Griffiths, the charity’s director of fundraising and communications, said: “The Martlets believes that all its employees should be paid a sustainable hourly rate that takes into account the costs of living and working in a particular location.

“The hospice values all its staff and believes too that there are benefits to the charity in committing itself to the payment of the Living Wage in terms of recruitment, retention and staff morale.

“We are pleased to be part of a campaign that aims to improve the lives of those working in the local community.” 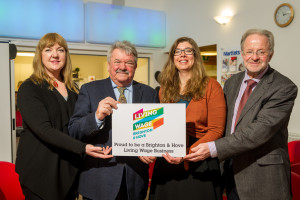 And this week Anderson Acoustics made it 204 businesses to date. The range of employers signed up to the Brighton and Hove Living Wage Campaign includes charities, social enterprises and public sector organisations as well as businesses.

The campaign began in 2012 and has been led and managed by the Brighton Chamber. It aims to encourage local businesses to voluntarily pay all employees at least the Living Wage rate.

Apprentices and interns are exempt.

Set independently and updated annually, the Living Wage is calculated according to the basic cost of living in the UK as the amount required for people to live a decent life, rather than just survive.

Julia Chanteray, president of the Brighton Chamber, said: “I’m really proud that we’ve signed up 200 businesses to be Living Wage employers in Brighton and Hove. And I’m looking forward to all the other businesses in the city joining as well.

“This makes a really clear statement about the kind of business community we have in Brighton and Hove. This city is definitely the place to do business.”

And the Chamber’s chief executive Sarah Springford told Culture Minister Ed Vaizey about the campaign when he came to Hove yesterday.

The council’s lead member for communities and equalities, Councillor Bill Randall, said: “In 2011 we set up the city’s Living Wage Commission.

“We then asked the local Chamber of Commerce to take the project forward because it’s better done business to business.

“We have given funding to the campaign through its formative years and will continue to support it next year as part of the wider business activity we commission from the Chamber.

“I’m proud of this council’s record as a Living Wage employer and grateful for the support Unison has given us on this issue. I’m delighted that the Martlets and so many other local employers have made the Living Wage pledge.”

Councillor Warren Morgan, leader of the opposition Labour group on the council, said: “Labour welcomes this achievement but we would like to see more.

“Two hundred businesses is still a small percentage of those in the city as a whole.

“Low pay is a scandal that must end and if elected in May we will work hard to ensure all staff get a decent level of pay for the work they do, and push for another 200 businesses paying the Living Wage.”

Paying staff the Living Wage – currently £7.85 an hour – is a voluntary commitment separate from the national minimum wage of £6.50 for adults over 21 that employers have to pay by law.