A Brighton dad has drawn this enchanting cartoon to help explain the science behind tomorrow’s solar eclipse to young children. 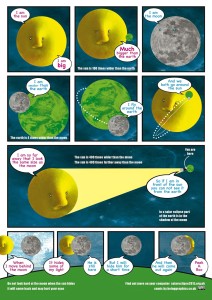 Simon Russell’s two young boys aged three and five are both excited about the eclipse, and wanted to know more about it.

But explaining how it happens can be tricky with children of that age – so Simon decided to put his cartoon crafting skills to good use.

He said: “I was trying to explain to my five-year old how the eclipse can happen and being an occasional comic maker this seemed the best way to put it down for him and his school friends in reception class-level language.”

His older son’s school were also impressed by the cartoon, and asked for copies to share with his classmates.

He has now published the strip on his blog, together with an A3 version he is happy for people to download, print and share.

For more information about tomorrow’s eclipse, which is due to be at its height above the city at about 9.30am, click here.