Brighton MP criticises use of ‘damp, dark and depressing’ accommodation for homeless people 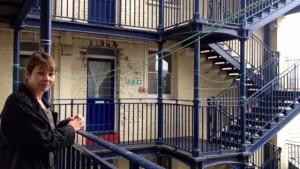 Vulnerable people and families in need of emergency accommodation are frequently housed at Windsor Court in Windsor Street, a nineteenth century building owned and managed by Baron Homes.

Ms Lucas said it’s the building she has been contacted about the most, and while blaming the situation on Government policies such as the housing benefit cap, has urged Brighton and Hove City Council to either insist the landlord improve conditions or stop using it entirely.

Writing on her website, she said: “The experience for many of those housed at Windsor Court, is not a happy one.

Since being elected it’s the building I’ve been contacted about most and I’ve visited a number of my constituents there over the past few years.

“Each of the rooms I’ve seen has been damp, dark, and depressing. The inner courtyard reminds me of a prison with the metal staircases and floors that run off it.

“So why does Brighton and Hove City Council continue to house so many vulnerable people there? It’s a question I’ve asked many times.

“Sadly, the only answer seems to be because it’s all there is available.

“I’ve repeatedly urged the council to put pressure on the landlord to improve conditions, or to simply not renew the agreement at all.

“More recently I’ve been pressing the council to increase security at the block and address access issues, as I’ve been made aware of a number of worrying incidents that have occurred there.

“I’m pleased to hear that the interim head of housing at the council will be visiting Windsor Court in person this week to see for himself the types of problems I’ve been describing.

“And while I don’t believe Windsor Court is a suitable building to house many of the vulnerable residents living there, the real fault lies with the Government, and policies it has introduced which serve to exacerbate the housing crisis and make more households at risk of homelessness.”

In response, the council denied the court is in disrepair, but said it does suffer from condensation, which is a problem for residents.

A spokesman said: “The block is monitored by the emergency accommodation team and inspected on a regular basis. Any defects are noted and reported to Baron Homes, which owns and manages the building.

“The flats are used as short term/emergency housing, one step up from bed and breakfast, where households live until they can be moved to longer-term accommodation.

“They also have the advantage of being in the city centre, close to schools and other facilities.

“Because of the steep rise in homelessness in the past four years some residents have been living at Windsor Court for longer than we would have liked, but most for fewer than six months.

“We are constantly looking to provide a higher quality of accommodation for homeless households. However, the demand for housing generally far exceeds supply in the city and is likely to do so for some considerable time.

“Indeed, we have about 20,000 households on our waiting list, and this week only 47 council and housing association homes were available to let. Of these, only 12 were family sized homes.”

Baron Homes was approached for comment, but had not responded at the time of publication.

Ms Lucas is calling for a raft of changes to housing law to improve conditions for tenants. To read her full Housing Charter, click here.