Dr Sen said: “As well as spending time talking to residents door to door, I was very happy to welcome a special visitor and Labour supporter Eddie Izzard for a walkabout in the city centre.

“We stopped in at Fair in Queen’s Road to talk to Siobhan Wilson about ethical trade. 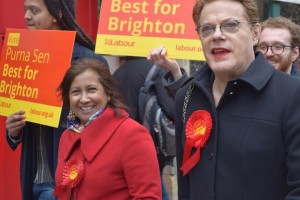 “I then went straight to the University of Sussex campus to join the Labour students at their stall.

“As on previous visits to the Sussex campus and when meeting students at Varndean Sixth Form College, I am impressed by the interest so many young people have in the issues facing the city, the country and our global environment.

“Then on Friday evening I joined Councillor Warren Morgan, Leader of the Labour and Co-operative councillors on (Brighton and Hove) City Council for a discussion with members of the Brighton Hove and District Fabian Society on Labour’s plans for the city council and for government in Westminster after the general election.

“Despite the weather, on Saturday morning we were at busy in the Fiveways area chatting to residents in Hollingdean and Stanmer and Preston Park wards.

“And then on to other parts of the city during the afternoon. I have been delighted by the demand for our new window posters.”