A campaign warning women of the dangers of walking home late at night has been criticised by feminists for blaming women for rape. 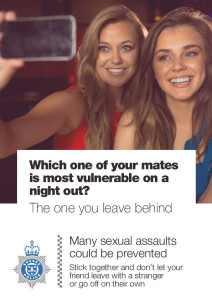 Sussex Police have designed posters urging people not to leave women in bars and clubs to make their way home alone.

But feminists say the campaign should instead focus on targeting sex attackers rather than shifting the attention to victims’ behaviour.

Carmel Maria Offord of the Cut it Out campaign against media sexism said: “As a feminist group we are pleased to see a campaign targeted at reducing the awful and all too common crimes of sexual assault and rape.

“We welcome moves by Sussex Police to encourage and train those working in the night-industry to intervene if they suspect or are witness to a sex attack. We believe that society as a whole has a responsibility to demonstrate a zero tolerance attitude to sexual harassment, assault and rape.

“However, we can not hide our disappointment that this poster campaign places the responsibility for avoiding sex attacks on women enjoying a night out together. It fails to mention the criminal at all.

“The only person reposnsible for a rape is the rapist and yet in a rape prevention poster he isn’t even in the picture.

“We applaud the widening of responsibility that this campaign seeks to engender. However, the visible part of the campaign, the poster, sends a clear message to women (the most likely victims of these crimes), that they must continue to alter their behaviour in an attempt to evade attack.

“We would even say it goes as far as to imply that women need to be escorted or chaperoned at all times if they are to protect themselves. This, of course, is false, as women are also raped and assaulted by friends and family.

“As women are actually more likely to be assaulted by someone they know, it also raises the concern that a victim may blame herself (and be blamed by others) for an assault if she failed to take all the precautions outlined here, a fact which in this type of crime may impact on reporting and prosecution rates.

“Whilst having people be vigilant is important, we would love to see a poster campaign which targets those responsible for rape first and foremost.

“We would like to see Sussex Police working with groups of women and looking at what has been successful elsewhere for their campaigns and consider whether this route is indeed the most appropriate.”

Since details of the campaign became public over the weekend, the force’s Twitter account has also been bombarded with angry tweets.

Chief Inspector Katy Woolford, who identified this as a risk area, said: “This time, after months of research and talking to partner agencies and people working within the night-time economy, we’re urging people to intervene when someone appears to be vulnerable or at risk.

“Door supervisors, taxi drivers, bar staff and groups of friends or the wider public need to take responsibility to protect others from those who may cause them harm.

“This is a real opportunity to make a difference. We would be failing in our response if, as with any other crime, we did not recognise that there are victims and urge them to take steps to minimise risks and help safeguard others from becoming victims.

“This is the first time we have taken such an approach to raise awareness, with the first phase urging friends to stay together and look after each other, so that no one is left alone or goes off with a stranger.

“It is vital to be aware of vulnerability so that steps can be taken to guard against it. Friends and bystanders can play a key role in this, learning to recognise where their intervention may prevent a crime taking place.”

This summer, Sussex Police will offer training to security staff and taxi drivers on what to do if they notice someone who appears to be vulnerable or subject to unwanted attention.

As well as the posters, which will be displayed on washrooms of pubs and clubs and at bus stops across Sussex, social and traditional media will also be used to support the campaign in the coming months.

Sussex Police and Crime Commissioner Katy Bourne said: “We all have a social responsibility to look after those in our society who may be more vulnerable due to various circumstances.

“I fully support any training that will enable effective partnership working, particularly during the night-time economy, that will help raise awareness of the signs of vulnerability, the signs of potential predatory behaviour and how to overcome the barriers that can stop some of us from intervening.”

Sarah Morris, Business Crime Reduction Partnership (BCRP) co-ordinator said: “The BCRP has been working with doorstaff to promote their duty of care to help reduce sexual offences in the night time economy.

“Through training and briefings the BCRP is trying to ensure that those working in the night time economy are not only identifying vulnerable individuals but also those who could exploit them.

“Door staff in Brighton have been responsible for some fantastic duty of care work over the past few months and this next strand of training provided by Sussex Police will continue to raise this awareness and further develop the ability to truly make a difference.”