The Astoria has been sold for £5.5 million to the same developer who converted the London Road Co-Op into student housing. 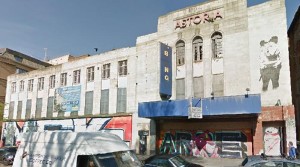 The new owners, who trade as the Student Housing Company, say they are now in the process of exploring future uses, but it’s likely it will become a residential block for private renters with none of the units for sale.

Acquisitions surveyor Ruth Appleby said: “We are having pre-application discussions with the council and it’s likely we will go down the route of private renter sector use and there will be an application in the next month or so.

“The ground floor will be taken up with either office or retail as well as communal elements for the tenants.

“The private renter sector model is similar to student accommodation. There will be cluster rooms which will have a kitchenette and living space, but also substantial communal space where social interaction is encouraged.

“For instance, we are planning on having a courtyard with allotment planters, sitting areas and dining space, a cinema room and a fully equipped gym.

“The target market is not just young professionals but people who can’t afford the property prices but still want a city centre location.”

The Student Housing Company’s conversion of the London Road Co-Op was praised for retaining the facade of the old department store.

However, Mike Holland last year secured permission to demolish the Grade II listed Astoria, which has fallen into serious disrepair.

And Ms Appleby said as it was heavily contaminated with asbestos and would cost a substantial amount to restore, Knightsbridge would also seek to tear it down.

Mr Holland bought the art-deco cinema for £2.2million from Brighton dance company Stomp in 2001 after its plans to use it never came to fruition.

After it closed as a cinema in the seventies, it became a bingo hall, and has remained empty since 1997.

In 1998, permission was granted to turn it into a horror-themed nightclub, but it never opened as a drinks licence was refused.